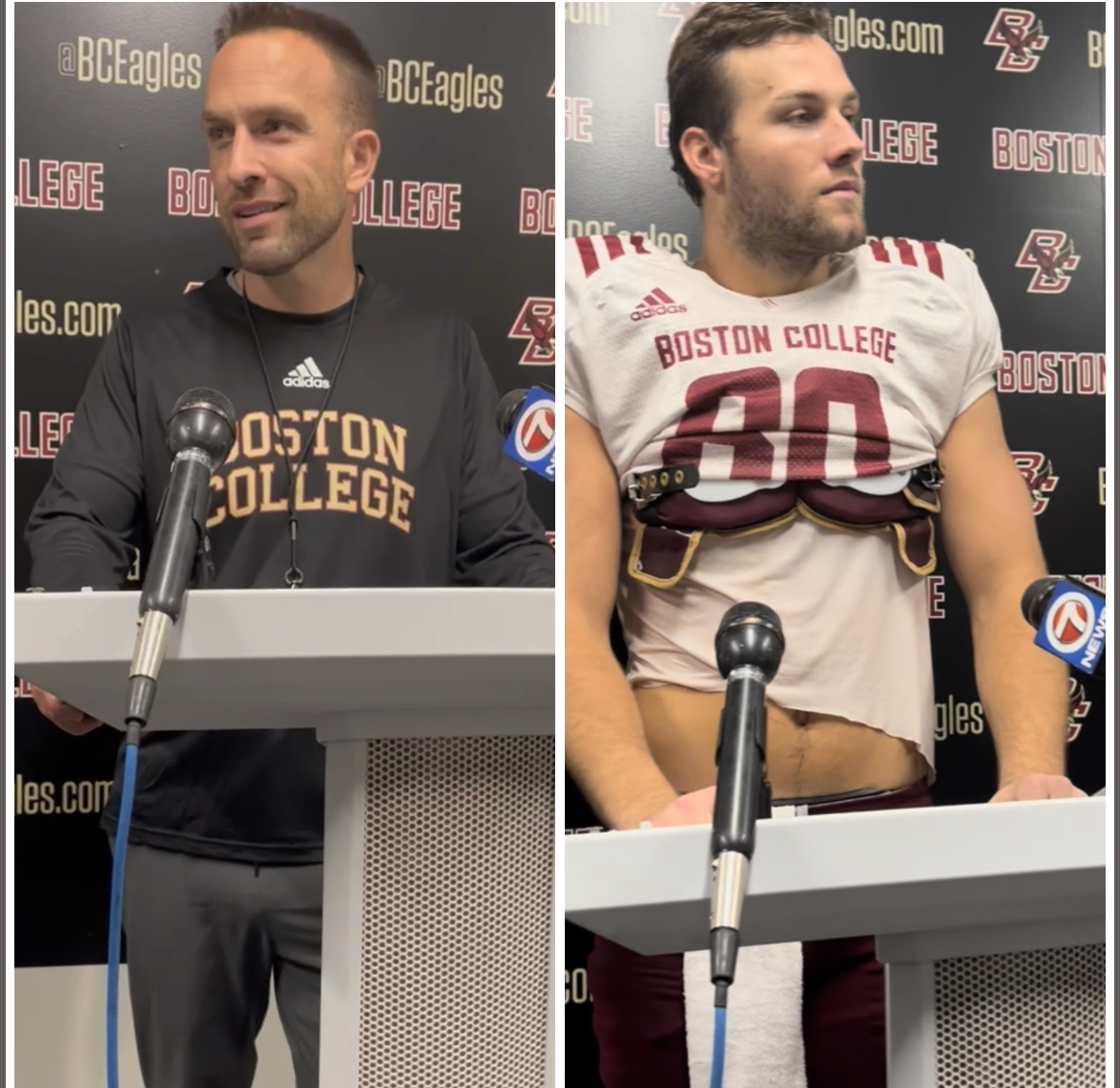 When walking up to the Fish Field House for BC’s weekly availability on Tuesday, music could be heard from the parking lot, sending waves throughout the campus and Alumni Stadium on a dreary day.

The Eagles were using the music to try and prepare for the noise they’ll face when visiting Lane Stadium on Saturday night for what is now a critical matchup against Virginia Tech.

The ugly loss to Rutgers has been put to bed, and all eyes were firmly trained on the Hokies.

“Usually, it lasts longer for people than others, but you’ve got to flush it and move on,” Hafley said when asked how long he wants players to let a loss “sting” for before moving on. “By the time we get back Monday, and really Sunday, by the time we have to get back to work as a staff, we have to move on and that’s what we did.”

George Takcas had quite a debut on Saturday and he also talked about how quickly he and his teammates were able to move on.

“I think it’s important to let it motivate you, but not be hung up on it,” he said. “We came in Sunday, walked through corrections, watched the tape and after that point, for us, it’s buried, it’s in the past, we take what we can learn from that and move on.”

Hafley and Takcas also touched on the atmosphere the team will be facing this week. Figuring out communication – particularly amongst the offensive line – will be crucial to BC’s success in such a raucous environment. The Eagles’ new tight end is one of the only members of the program who have actually experienced the game day scene there, since BC’s only game in Blacksburg under Hafley came at a time when fans were not allowed.

“I actually played there last year,” said Takcas. “It was a close game down there. It’s an awesome environment. I think it definitely helps me having been there, not to get caught in all the extra going on and just focus on the game. I’ve talked to (teammates) a little bit about it, but at the end of the day, most of these guys have played in loud stadiums before, so it’s not that different than anywhere else.”

“I’ve been there before in Covid. It was dark, eerie and cold,” Hafley added. “We’ve got some guys on the staff who have been there. We’ve researched it and listened to it a little bit, it’s loud, so we have to do our best job of simulating that. It’s hard but it’s what we have to do. Started off today and did it, we’ve got to be able to handle it and embrace it.”

If you’re walking around the BC campus for the next two days and hear Metallica, Bruce Springsteen, ACDC or any other loud rock music, you’re not missing out on a concert, it’s just the football team preparing for what undoubtedly will be a chaotic atmosphere Saturday night.