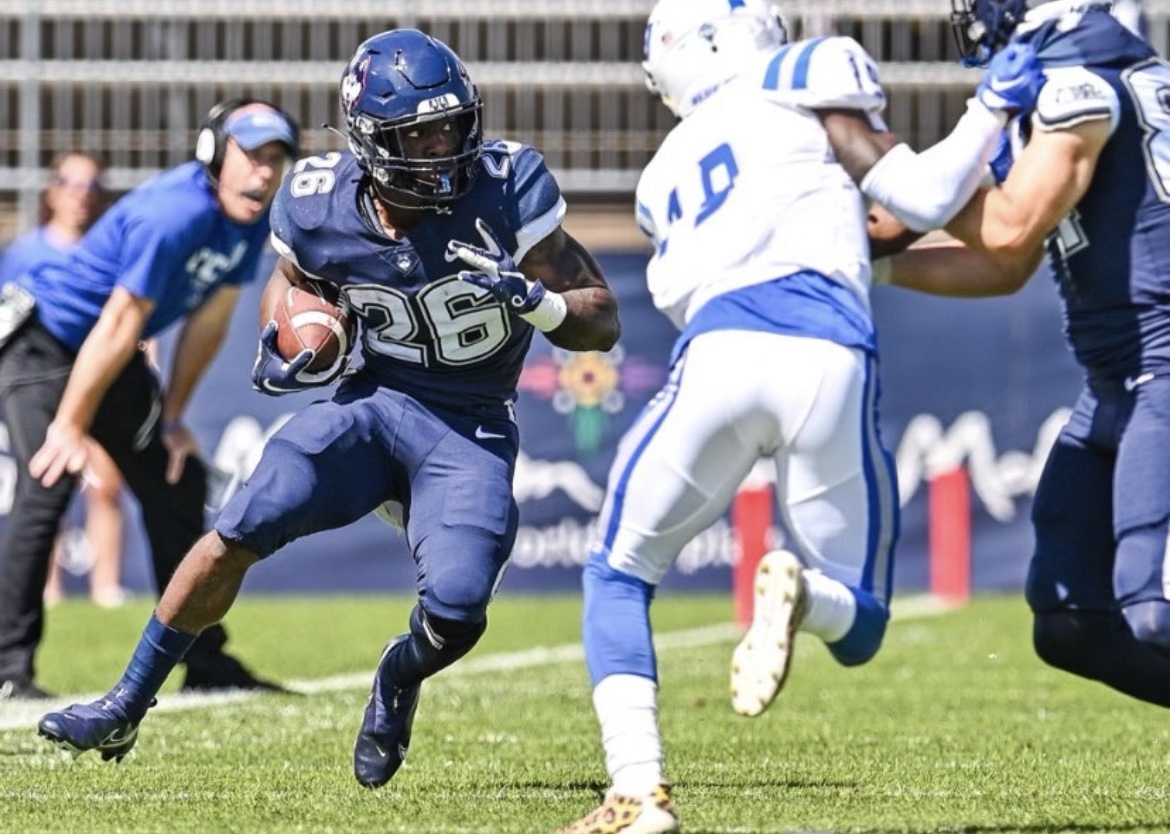 EAST HARTFORD – A week ago, UConn lost, but took a step forward. The Huskies, off a 2021 season in which they tied for the worst record in the NCAA’s Football Bowl Subdivision, opened 2022 by hanging with Utah State, the defending Mountain West champions. They got off to a 14-0 lead. They found themselves in a one-score game with 10 minutes left.

“I think we took a step,” head coach Jim Mora said after his team fell 31-20 on the road against the Aggies.

Saturday, his team took another step. When Victor Rosa scampered inside the 5-yard line and pushed across the goal line with 36 seconds remaining to ice a 28-3 win over Central Connecticut State, it also marked Mora’s first win at the helm in Storrs.

Rosa entered for three late plays with the game essentially in hand, but his big run reflected what the UConn offense showed all day. On the game’s opening drive, Nate Carter and Brian Brewton helped pick up a first down with four-straight plays out of the backfield, but the first downfield pass by quarterback Zion Turner—an inside slant—sailed through Dajon Harrison’s hands and the Huskies punted.

In the first quarter, the CCSU offense outpaced UConn’s. Kyren Petteway turned an outside hitch into a 14-yard pickup before the Blue Devils’ first drive stalled. On the second, Petteway took a jet sweep for 17 yards before a 14-yard pass to Isiah Williams. Again, the offense stalled.

UConn had a shot to crack the scoreboard early in the second quarter, when Jordan Morrison tipped a CCSU punt and Turner drove the offense into Blue Devil territory. But Luquay Washington answered the deflected punt by blocking Noe Ruelas’ long field goal attempt and the game remained scoreless.

“He’s got to get that higher,” Mora said of the blocked kick. “It’s a 52-yarder so it’s going to come out lower, but I thought our protection was good on that.”

The Huskies turned to the ground, rushing on 10 straight plays and gaining 70 yards on the ground before Turner found tight end Brandon Niemenski streaking up the seam for an 11-yard score. It was Turner’s second touchdown pass of the season, and his first since the waning minutes of the first quarter against Utah State, when he entered the game in place of Ta’Quan Roberson.

“That kind of got us going,” Turner said.

Late in the second, UConn returned the earlier favor from CCSU when Eric Watts blocked Cristiano Rosa’s 41-yard field goal attempt. With just over two minutes left in the half, Nick Charlton’s offense jumped into hyperdrive, flying down the field with their pass-happiest drive of the day. Nine ticks remained when Turner took one more shot at the end zone. His pass spiraled towards the goal line, where it was deflected into the air and intercepted by Harold Miles.

UConn fell in the home opener last year to Holy Cross. It needed everything it had to squeak out a win against Yale. It hadn’t beaten an FCS opponent by double digits since 2011.

“There could’ve been a tendency to panic a little bit,” said Mora. “I thought our guys came in at half time and calmed down, we corrected some of the errors that we were making, and we came out and had a pretty darn good second half.”

Out of the break, CCSU went 56 yards on six plays, then Romelo Williams lofted a pass for Everett Wormley, who hauled it in on the dive at the two-yard line. With the Blue Devils two yards from taking the lead, Dal’mont Gourdine delivered what Mora called the biggest play of the game.

As Williams faked a hand-off right, he spun back left and looked to throw. But before he could even raise his arm to heave a pass, Gourdine met him in the backfield, dropping the Central Connecticut gunslinger for a loss of 11. Two plays later, Cristiano Rosa’s 21-yard field goal attempt banged off the left upright. The most promising drive of the day for CCSU resulted in no points.

“That was debilitating,” said Blue Devils head coach Ryan McCarthy. “We need to be able to do a better job of capitalizing there.”

“That was huge,” said Mora. “Absolutely changed the trajectory of the game.”

The rest of the game was all UConn. They took advantage of CCSU’s red zone miscues, launching an 80-yard drive that ended in Nate Carter’s 17-yard touchdown dash. Then Turner found Jacob Flynn on a back-shoulder pass to make it 21-2 in the early fourth. Victor Rosa’s run made it 28-3 in the final seconds.

“Going into that game not really understanding what it was all about, you felt it,” he said. “Today makes me excited for this group, proud of this group, and excited for next week.”