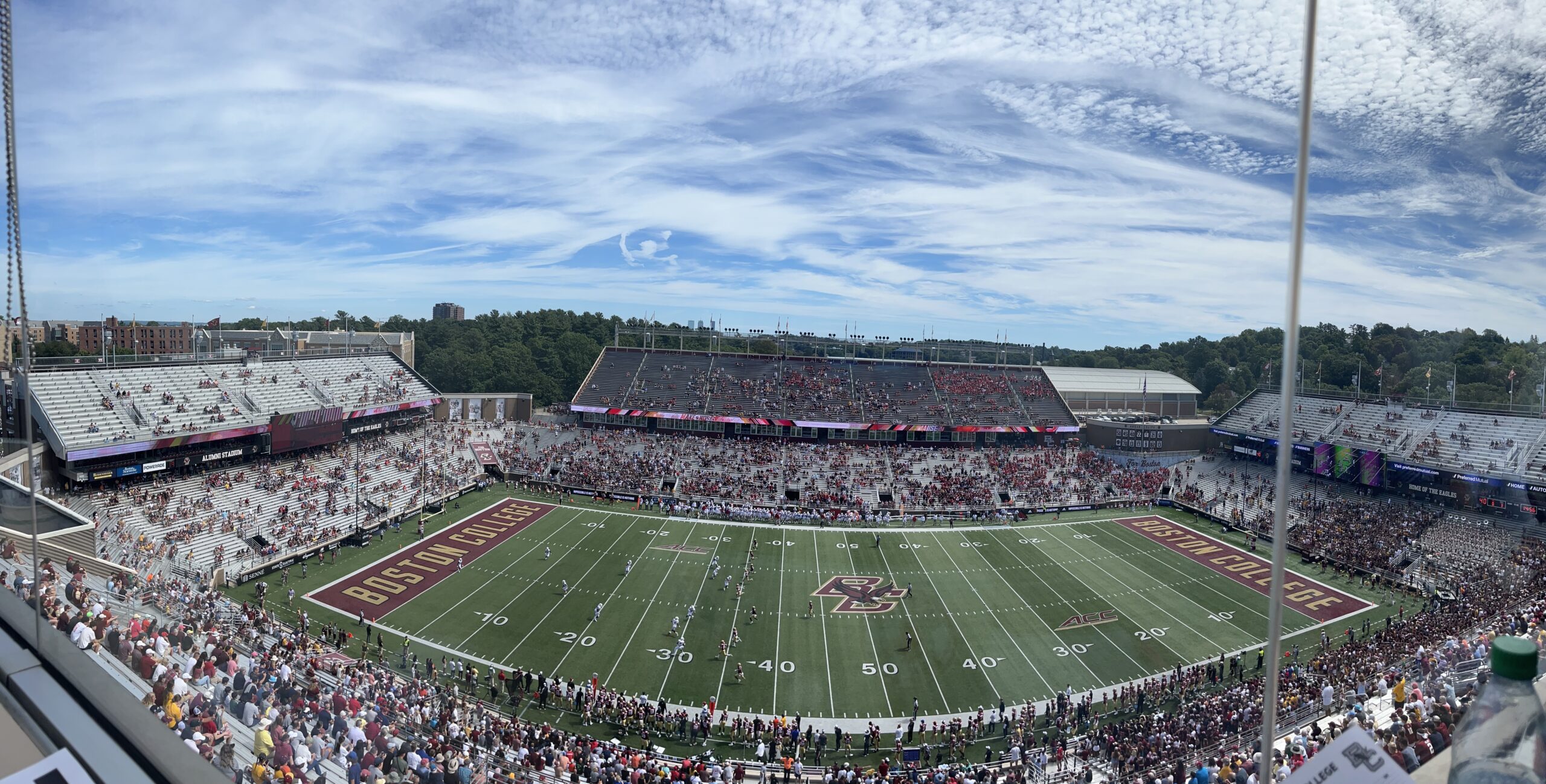 CHESTNUT HILL – Well, that’s certainly not the start the BC fan base was looking for.

After all the talk surrounding the Eagles’ high flying offense and underrated defense throughout the offseason, it was some of the same old problems that came back to haunt BC in a stunning 22-21 season opening loss to Rutgers on Saturday.

The Scarlet Knights used a 12-play, 96-yard march to steamroll the Eagles late in the game. Rutgers attempted just one pass on the drive, dominating the line of scrimmage until Al-Shadee Salam scampered in from 26-yards out with 2:43 remaining to put the visitors up by one.

Phil Jurkovec was sacked on second and third down on the ensuing drive, setting up BC with a 4th-&-25 at its own 10. Head coach Jeff Hafley called timeout and punted the ball back to Rutgers. The Eagles eventually forced a punt with 17 seconds left, but a running into the kicker call gave Rutgers a first down to ice the game.

“That’s probably the most disheartening part, is that they were able to run the ball for 90-something yards, not throw the ball and score,” said Hafley. “Credit to them. Credit to Coach Schiano and their staff and their players. They beat us.”

After an inauspicious start to the season where Jurkovec was drilled from behind and nearly strip sacked on the first offensive snap, it should have been taken as a sign of things to come for the 35,048 in the stands.

On the team’s second offensive possession, Jurkovec led a quick four play, 41-yard drive that took just 1:17. The big play of the drive came in the form of a 29-yard catch from new tight end George Takcas (7 catches, 84 yards), and Jurkovec capped the drive with an 11-yard touchdown pass to Zay Flowers (10 catches, 117 yards), making it 7-0 with 8:42 left in the first.

After an interception and a punt on BC’s next two drives – sandwiched around a 26-yard touchdown run for Rutgers’ Aron Cruickshank on a double reverse with a missed extra point – BC was able to finally find some rhythm for at least one drive and put together a 10-play, 79-yard march that chewed up 4:19 of the second quarter and ended with Jurkovec hitting Flowers for a 26-yard TD, making it 14-6 with 5:15 to play in the half.

Elijah Jones came up with an interception in the final minute and brought it back across midfield. A late hit on Rutgers gave BC a golden opportunity to add some points before the break with the ball at the 31 and 34 seconds remaining. Unfortunately, the offensive line continued to struggle, the Eagles couldn’t muster any more positive yards and Connor Lytton missed a 44-yard field goal wide right, leaving just an eight-point difference at the break.

It was a disastrous start to the third quarter for BC as Jurkovec fumbled a snap three plays into the opening possession. Rutgers recovered and Kyle Monangai punched in a short TD two plays later. The ensuing two-point attempt failed, keeping the score at 14-12.

“It felt like we had every opportunity to take the game over,” Hafley said. “We got the ball back at halftime, we attempt a field goal to go up and then we get the ball (to start the second half). I feel like every opportunity we had to put them away we let them back into it and usually if you do that you lose the game.

“We didn’t coach well enough and obviously, that’s myself and the staff. We didn’t execute well enough either.”

The sign of a good team is your ability to handle adversity and the Eagles were able to shake it off briefly, stringing together an 11-play, 66-yard drive that ended with Jurkovec hitting Jaden Williams for an 11-yard touchdown to push the lead back up to nine.

The Eagles punted on the next possession and Rutgers ended up kicking a field goal to make it 21-15 heading to the fourth. Early in the final quarter Jurkovec was picked off at the Rutgers 38 with BC again driving to try and put the game away.

“I’ve got to focus on myself and what I need to do,” said Jurkovec. “I missed some plays, turned the ball over a couple times and I could definitely hit some more passes there, get the ball out of my hands. I thought the O-line was great with protection in the first half and then Rutgers came out in the second half with a bit more pressure.”

Both teams traded punts before the Scarlet Knights embarked on the 5:02 drive that the BC faithful will remember fo ra long time for all the wrong reasons. Despite the ugly nature of the loss, the bright spots on offense were unquestionably Flowers and Takacs. The O-line is going to be a work in progress all year and that final drive should provide the defense motivation for the remainder of the season.

Hafley adamantly spoke postgame about not letting this one affect the rest of the year.

“This is not doomsday for me,” Hafley added. “I’m really upset I am, like, really upset because I do believe we could have won that game. I don’t want to say should have because that’s what losers say, we had every chance to win and we didn’t and that’s on me.

“Whether we won or lost today, we’ve got to wake up tomorrow and get better, because even if we won that game we didn’t play well enough to continue to win. It’s go back to work. We’ve got young players that are going to get better and have to. I’ll look at myself first and they need to look at themselves. Everyone needs to do that and not point fingers…look at yourself, wake up, get better and don’t sulk. We’ve got a lot of football left.”