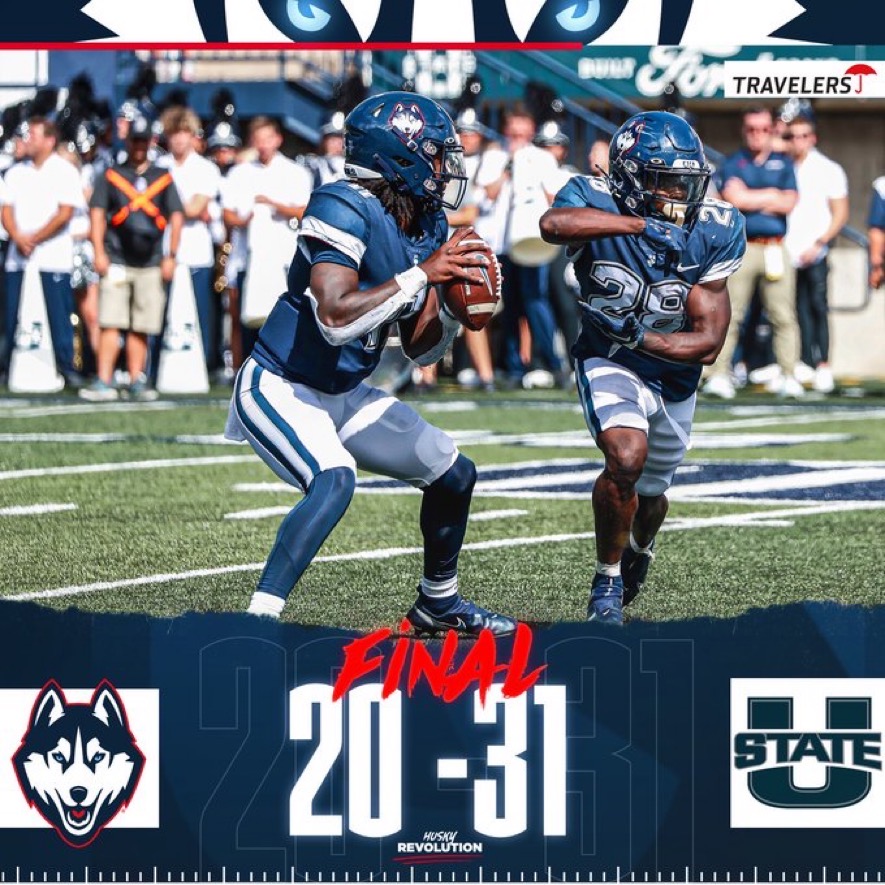 Well, well, well, look what we have here. It appears the UConn football program may just be fun to watch again.

The positivity surrounding the Huskies’ football program since Jim Mora was hired meant nothing until the team took the field for a game and showed that it wasn’t all talk. Supporters needed to see actual evidence that things really are going to be different now. Fans and alumni got that proof in spades on Saturday.

The Huskies entered the first game of the Mora era on the road against Utah State as 24-point underdogs, but looked like a team ready to win in the not-so-distant future, a far cry from the team that was mocked alongside UMass nationally just a year ago.

Penn State transfer Ta’Quan Roberson was knocked out of the game early after getting the starting nod, but sophomore running back Nate Carter ran for a career-high 190 yards on 20 carries and freshman Zion Turner was pretty good after being thrust into action at QB. The defense was impressive – particularly on third downs and in the turnover department – but unfortunately, the officials played a huge role late and the Huskies just couldn’t get enough stops in the end, falling 31-20.

Despite the loss, Jim Mora, his staff and the team answered the “is this really a different team?” questions with a resounding “absolutely” right out of the gate.

“We hate to lose, we didn’t come here to lose,” said Mora. “So, we don’t feel good about that and there’s a real disappointment in that locker room. These young men have been through a lot and have made a tremendous commitment to what we’re trying to do here and they’re a great group of young men. They have a lot of heart and it means the world to them…but, we’re not discouraged.

“I saw a lot of things today out of this group that lead to encouragement. We’re disappointed, it’s a bitter defeat and no one wants to lose, but I’m encouraged by the way they competed until the end.”

It’s probably a bit too simplistic to say this one came down to two plays, but it sort of came down to just two plays. The first one came just 52 seconds into the second quarter, but let’s back up a bit.

UConn jumped out to a stunning 14-0 lead after one thanks in large part to Carter, who helped set up the first touchdown of the season with the longest run of his career, a 52-yard burst deep into USU territory.

Roberson capped the nine-play, 79-yard drive by plunging in from a yard out for his first career touchdown and a 7-0 lead five minutes into the game after the defense forced a punt to open the year.

The Huskies got a huge play from junior linebacker Jackson Mitchell (Ridgefield, Conn.) when he forced and recovered a fumble, but Roberson sustained an injury to his right leg on the second play of the ensuing drive, forcing Turner into an early college debut. It was a rough start as his second career pass attempt was picked-off, but he bounced back to lead a four play, 79-yard scoring drive that gave the Huskies a 14-0 lead at 1:38 in the first when Keelan Marion hauled in a TD. Carter was the main player during this scoring drive as well, ripping off a 44-yard run while Turner ended it with his first career scoring strike. At one point early on, Carter had 110 yards rushing while the Aggies had 71 yards total.

UConn got a stop on fourth-and-inches on the next drive, but that first of the two aformentioned plays came three snaps later when Carter was stripped from behind with 14:08 left in the second. From there, the Aggies ripped off 24 straight points to take a 24-14 lead at the half.

UConn managed to hang around in a defensive struggle throughout the third quarter. Neither team was able to score, which meant the Huskies were still within 10 heading to the fourth. Spurred by another forced fumble and recovery, two field goals of 47 and 54 yards for Noe Ruleas with 13:28 and 10:09 remaining made it a 24-20 game.

“There was a shift (in momentum) and we noticed it. Going into halftime we addressed it,” said Carter. “I think the way we came out in the third quarter was amazing, how we handled that…when we hit adversity, we just have to make sure as a team we continue to keep our heads up high in the midst of everything. As a team, we fought today.”

With Utah State facing a 3rd-&-12 and just under eight minutes left on the clock, it appeared that the Huskies got a stop on a well-defended deep ball as sophomore DB Kaleb Anthony stayed step-for-step with his man and turned his head around to make a play on a severely under thrown ball. This was that second game-changing play as the referees inexplicably threw a flag, extending the drive for the Aggies.

Five plays later, Utah State found the end zone again to put the dagger in, making it 31-20 with 6:00 left. Turner was picked off on the next drive and the Aggies eventually ran out the clock.

Dan Olorvsky, Darius Butler and various former alumni turned NFL players and/or analysts took to Twitter after the game to applaud the efforts of the team and the staff. There’s no such thing as moral victories in football, but given where this program was a year ago, Saturday’s loss was the definition of a moral victory.

“It’s tough to say we took a step today when you lose, but if you take a step back – which I’m trying to do and you look at it – I think we took a step,” Mora added. “I’m very proud of those young men. Not just for today, but for everything they’ve done leading up to today.