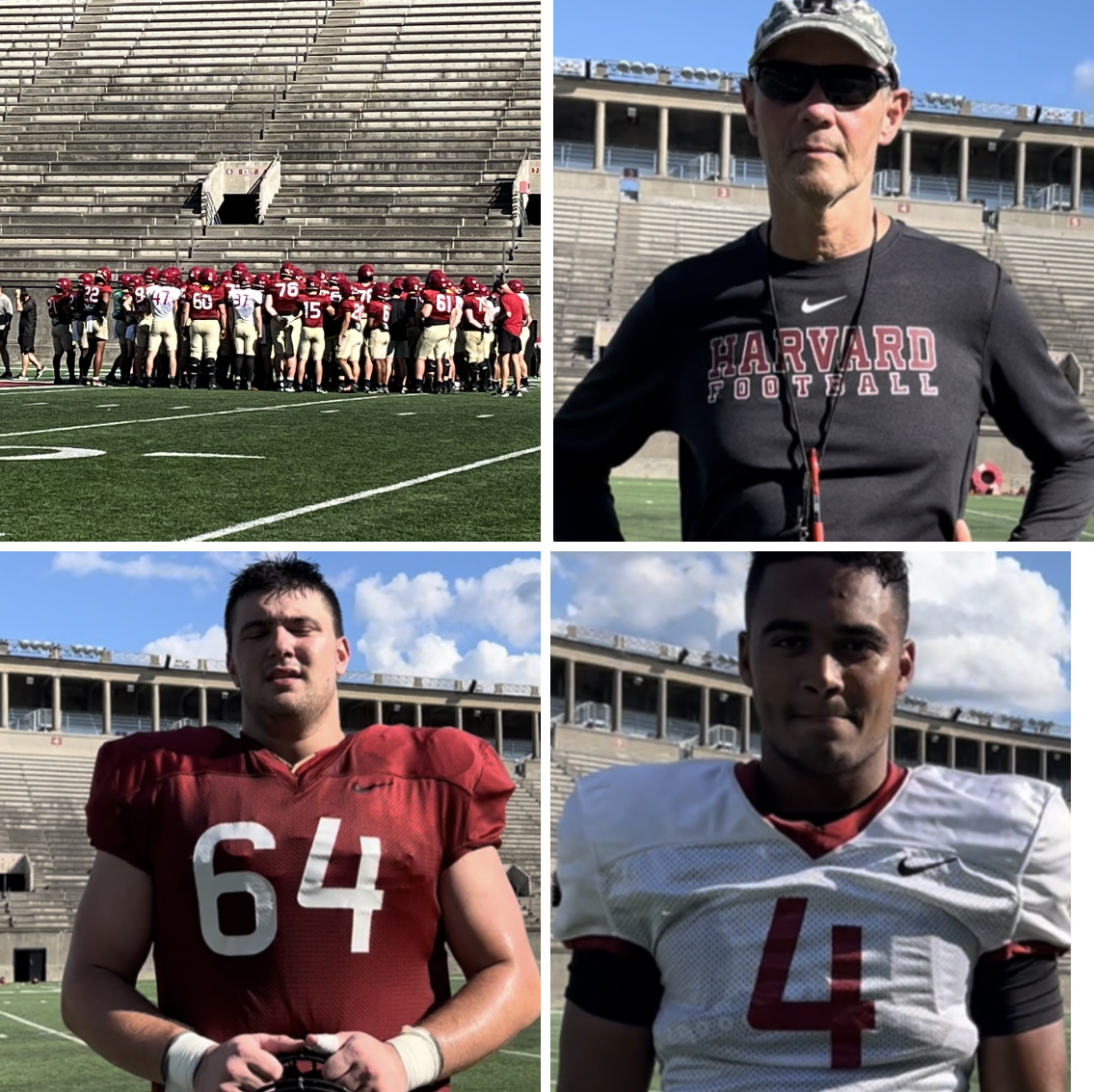 We took a quick trip over to North Allston (I always thought it was Cambridge) on Wednesday to check in with head coach Tim Murphy and the Crimson as they ramp up their practices.

Wednesday was the first “live” day for Harvard with pads as they begin preparation for the opener against Merrimack on September 16. Here’s what stood out after watching the guys compete for a little over two hours…

1. Versatility: Early on when the defense and offense was split up after stretching, I walked over to the offensive side of the field and watched the quarterbacks, running backs, receivers and tight ends rotate between six different stations. At one point, QB’s went through and caught passes while coaches used pads to simulate “catching through contact.” Between that and just focusing on the skill guys as a whole, Harvard can do a lot of different things with a lot of different, talented chess pieces to move on the board.

2. RB group is impressive: It won’t be easy replacing Aaron Shampklin, but the group the Crimson have should be able to do it. Led by Aidan Bourget, there’s some serious speed and size in the room. Sophomore Malik Frederick, classmates Israel Benjamin, Caden Woodall and Shane McLaughlin and juniors Jelani Machen and Sone Ntoh all looked good at times, but this is Bourget’s show.

3. QB competition: It feels like either junior Charlie Dean or senior Luke Emge will end up as the starter, but I wouldn’t be totally shocked if both guys play in games. Freshman Jaden Craig, sophomore Connor Easthope and junior Curt Casteel all showed arm talent at various points throughout practice, but Dean and/or Emge should be leading the way when Merrimack visits in a few weeks.

6. Special teams thumping: This was the most physical practice I’ve been to – at all three levels – throughout the summer. What surprised me the most was how hard guys were hitting during kick off work early on. There wasn’t any full blown blind side’s or anything stupid like that, but there was some serious contact for the 15 minutes or so that I haven’t seen anywhere else. If this is a sign of things to come in the regular season, teams will have to make sure the helmets are buckled up tight immediately.

8. Speedy wide receivers: Senior Kym Wimberly, sophomores Scott Woods II, Cole Cleary (Newton, MA/MIddlesex) and Ledger Hatch and junior Jack Bill – among others – are all speedy targets for whoever ends up starting under center Week 1. Woods caught two deep touchdowns on posts during a late 11-on-11 period, getting behind the defense with relative ease.

9. Big tight end group: Obviously, you want your TE’s to have some size to them and Harvard has it. Sophomore Tyler Neville (6’4, 235), classmate Scott Giuliano (6’5, 226), junior Haven Montefalco (6’4, 231), junior David O’Keeffe (6’2, 246) and possibly Tim Dowd (Topsfield/Pingree) despite being listed as a RB could and should all provide adequate play at that position based on the small sample size I saw.

10. Linebacker and defensive back speed: Led by senior Jack McGowan (Canton, MA/Catholic Memorial)this group can fly sideline to sideline and wrap up ball carriers. It was impressive to watch them in the run game and in coverage on Friday. Classmates Solomon Elbe and Brandon Won, junior Matt Cavanagh, and sophomore Ben Harding (Lee, MA/Philips Exeter) are just a few in a group where athleticism reigns supreme. Sophomore DB Kaleb Moody (North Andover, MA/Choate), juniors Cam Stone and Diassa Diakite and seniors James Herring and Max Jones can all cover and tackle well.

-Cavanagh had a tip-drill INT during 11-on-11 work and drew a huge roar from his defensive teammates before punting the ball to the moon.

-Emge had a pretty RPO 40-yard TD run down the left sideline and drew a bunch of random/hilarious individual celebrations from various guys on offense.

-Benjamin broke off a 40-yard touchdown run at one point, kid can fly.

-Junior linebacker Kobe Joseph had an interception on a floating ball that looked more like a punt – fittingly on Kobe Day (8/24).

-Both of Woods II long TD’s were impressive. He was able to get separation, then track the ball well and haul it in. After the second one, he ran back up the defensive sideline with some taunts for his teammates who couldn’t stop him, he should be a big time weapon for the Crimson.