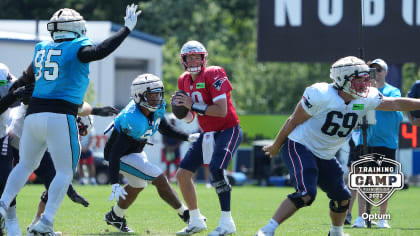 If you’ve ever played football or been to a practice in August at the high school, college or pro level, you’ve seen a fight or two. Maybe even 50.

It’s bound to happen given the nature of the game and the size of the people playing it. Recently, the Panthers and Patriots had multiple fights over a two-day span of joint practices. Some will say that it can be a team-bonding type of moment with players defending teammates, others will say it’s a complete waste of time and a sign that you aren’t very disciplined. The scraps between teammates in team practices are harder to defend as productive, but, in the end, mostly everyone involved in the game believes the fisticuffs are pretty counter productive, but also blown way out of porportion.

Mac Jones chimed in with his thoughts after the second day of practices with the Panthers on Wednesday, a day that saw a fight spill into the stands.

“Yeah I think everyone’s competitive and then sometimes that’s how it gets out here,” he said. “The big thing is it’s football and we’re here to practice and try and have a good day. The coaches handled it properly just calling up the teams, and Coach Belichick obviously gave us good advice about just playing the next play, and play football, and not worry about fighting other people and stuff like that. Just come together and get the good work in that we need to get against a good team.”

St. John’s Prep head coach Brian St. Pierre has seen it all in camps during high school, his college days with BC and then in the NFL.

“To me, it’s just part of the training camp experience. “Long hot days, seeing the same guys every day for hours on end, you get sick of each other,” he said. “I don’t believe it contributes to team building at all. It’s not surprising when it happens, but nonetheless it accomplishes nothing. It doesn’t make a team tough or extra physical.

“Good teams fight, nature of the beast, much ado about nothing.”

Ashland High School head coach Andrew McKay has seen plenty and believes it’s important to separate fights from scrums when talking about which one is helpful and which ones are just plain dumb.

“I think there is a major difference from a scrum and a flat out fight,” he said. “Intensity and competition is part of the game. You can completely grow as a team through adversity. That being said, being obnoxious and trying to hurt someone will never be part of our game. Continuous altercations can’t be tolerated, but, it also depends on the level.

“For our kids, the teaching points are coming together through these times, but having accountability for your actions is also important. At Ashland, we try and use these moments as teachable ones.”

Boston College head coach Jeff Hafley has coached in the NFL and now at the highest level in college and he seemed split on the productive/counter productive aspect of the brawls, but acknowledged it’s far more common than people think.

“I don’t know, you want guys to play with an edge,” Hafley said. “In the NFL you get a lot of those inter-squad scrimmages, I’ve been a part of those and I think there’s been a fight in just about every one I’ve coached. Especially, in those practices…sometimes you do those practices for one day, sometimes you do them two or three and usually on the second day it gets chippy and by the third day it really picks up.

“Some guy, I think he cheap shotted me the second day, the third day now I’m gonna’…I don’t know. Do you get anything out of it? Sometimes. Is it a waste of time? Yeah. Someone throws a punch and breaks their hand and is out, or you hurt somebody on the other team, then it’s bad. So, I’m not sure, but you’re going to have a couple skirmishes. It’s a tough sport, you get hit, you get drug to the ground. I want to teach them that I want you to pop up and be pissed off, handle it within the next play. Find out who it was and go after them in between the whistles…there’s huge teaching moments in that.”

Hafley passionately pointed to an example of how it was counterproductive during a team scrimmage on Monday.

“We had in our scrimmage and it led to the ball being on the plus-25, and now there’s points on the board because a player was selfish,” he added. “That’s a great teaching moment for us. Do it in-between the whistles, that’s what the game’s meant to be…you got me heated there a little bit.”

The fights between the Panthers and Patriots during the week also highlighted the question as to whether or not joint practices are more important, or more productive than preseason games. The NFL has clearly shown they believe the preseason games themselves aren’t as important anymore, eliminating one all together.

On one hand, the ability to rep the same play in the same spot until it’s perfect against an actual opponent during the joints is extremely valuable. On the other hand, young guys who won’t get those reps in practice get to feel the true game day experience with a preseason game under the lights, something that can’t be replicated on practice fields.

On Monday, Patriots coach Bill Belichick shared his thoughts on whether or not he’d ultimately get more from the practices than the game on Friday night. Of course, he also didn’t know these sessions would turn into two episodes of AEW Dynamite at the time, but still.

“Yeah, in some respects, you do,” he said. “We had a couple of great situations come up in the game against the Giants: the Giants got the ball at the end of the half and they were backed up, and they drove the ball and got it around midfield and then they couldn’t quite get into field goal range and ultimately had a Hail Mary situation at the end of the half that they ended up scrambling on. Same thing at the end of the game: we took the lead, they came back. A lot of our players obviously weren’t in there in those situations. The great thing about practice is our players get more opportunities at those situations, especially guys that probably have a higher chance of being in there during the regular season than were in there at those two points in the Giants game, as an example. So, a lot of reps out here for our players. Obviously more reps in practice – when you add all the practices up – than there are in the games.

“Just  more practice opportunities, more chances to get better, more ways to improve, and more things you can find that you need to work on. I mean, in the end, the games have a lot of value too because it’s a game, and it’s structured differently, but there’s certainly a lot to be gained in practice. So, they’re both really important.”