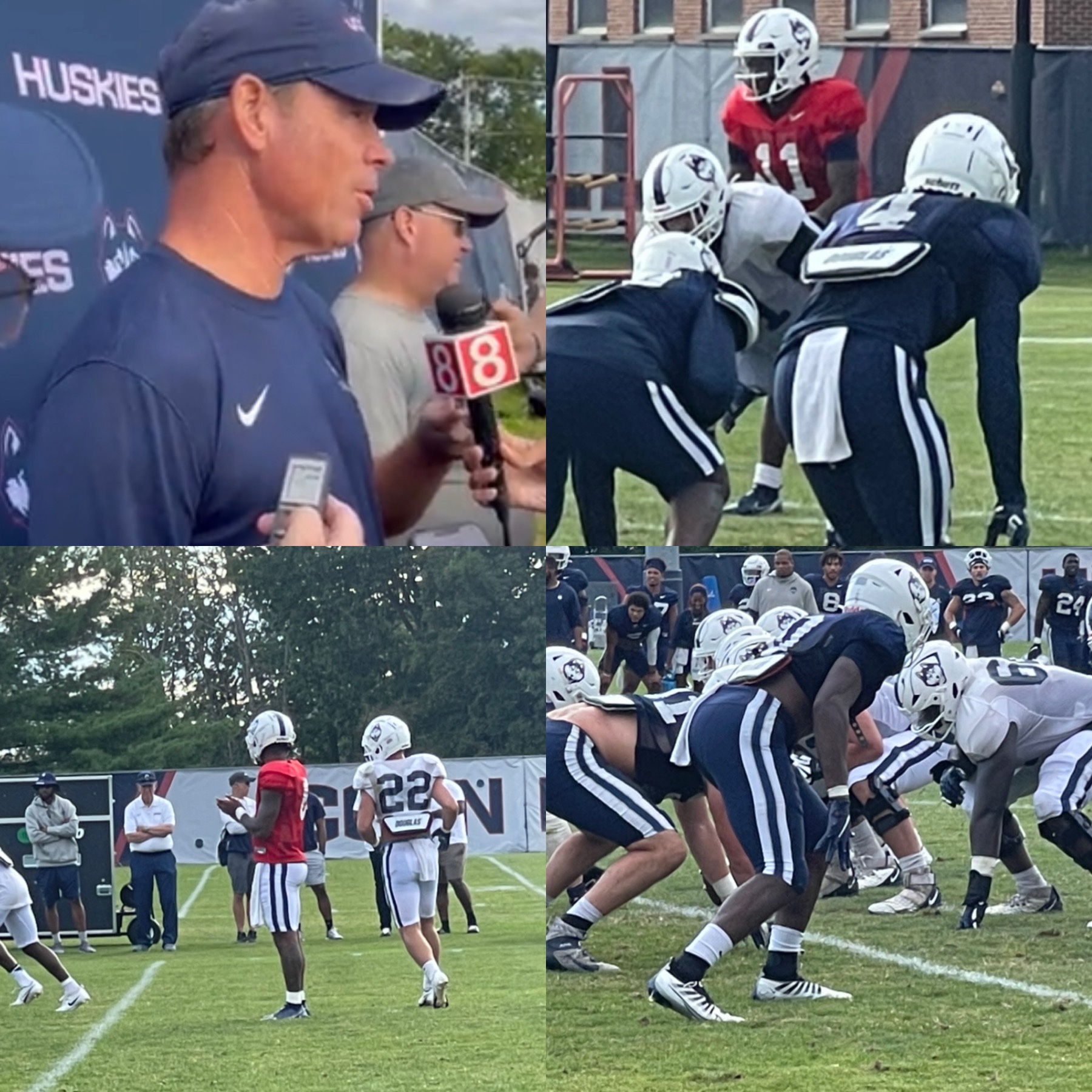 Our latest camp visit brought to Storrs on Saturday where we visited with the UConn Huskies. The team held a situational scrimmage that last two hours. There was a lot to digest so here are my ten takeaways from the scrimmage.

1. Quarterback update: Coach Mora had a clear as day response yesterday when asked if any of the four quarterbacks helped themselves. His answer. “No”

I would agree. In my view, Ta’Quan Roberson and Zion Turner are the front runners but with two weeks left before Utah State, no one has taken hold of the starting job. Mora and his staff have two weeks to figure it out.

Tyler Phommachanh and Cale Millen had their moments but Phommachanh is still trying to come back from a knee injury while Millen is trying to get acclimated to the program. Both are still in the mix to start however.

Roberson had the play of the day for the quarterbacks, breaking a counter read play for 60 yards on the second play of the game.

Turner made his own big play when he hit tight end Bo Estes on a 25 yard touchdown pass. 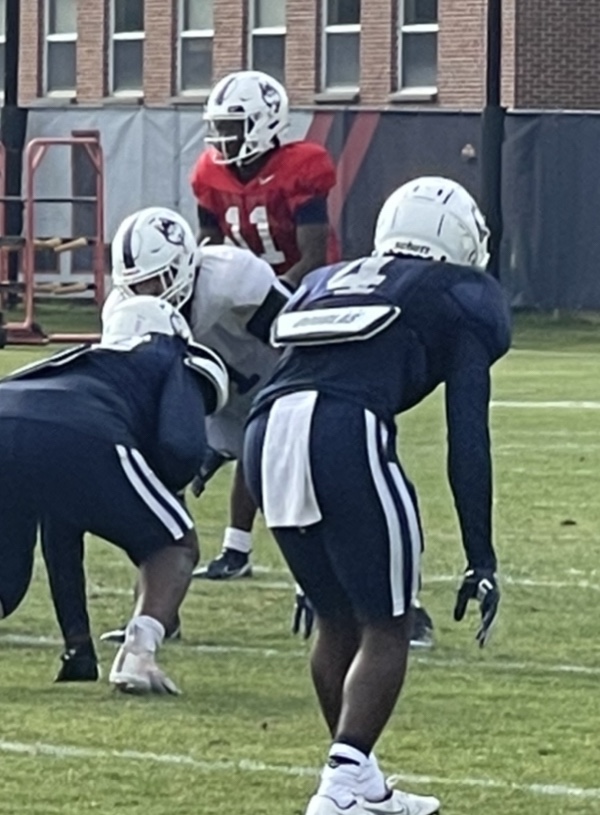 2. A commitment to the running game: The offensive game plan was simple on Saturday. Pound the rock ! That is exactly what the Huskies did. Offensive coordinator Nick Charlton wanted to set a physical tone in yesterday’s scrimmage and I think the offense did that. Running the ball will take pressure off the quarterbacks, get the offensive line more engaged and it will allow three different backs to touch the ball and make plays.

3. Backs impress: Speaking of the running backs, I was very impressed with sophomores Devontae Houston and Nathan Carter and true freshmen Victor Rosa. All three ran hard, balanced and pushed the pile. UConn has a nice rotation of backs that can all do different things.

4. Rosa steals the show: The former Connecticut Gatorade Player of the Year was impressive yesterday. Especially when you considered he’s a converted quarterback. He ran square, showed good burst and power and he looks like he will be a factor in the passing game as well. When Charlton was asked about Rosa, the first thing he mentioned was his toughness.

“He’s very tough. We recruited him as a running back. We knew he had some position flexibility. Charlton added: “He’s a joy to work with. He loves football. He’s always very positive. He’ll take every rep.”

The toughness and versatility were on full display yesterday.

5. Length along the defensive line: The Huskies defensive line will give offenses problems. They have length, athleticism and they move well laterally. Junior Eric Watts, redshirt sophomore Dal’mont Gourdine, redshirt junior Sokoya McDuffie and sophomore Collin McCarthy all present match up problems for the offensive line and we saw that on Saturday.

7. Defense brings the juice: I thought the Huskies defense brought the juice all afternoon. They struggled at times and gave up some big plays but the intensity and the energy was there. They played better as the afternoon went on.

8. Secondary ball hawks: The secondary made some nice plays all afternoon. Cornerback Chris Sherin picked off Roberson late in the scrimmage in a red zone period to cap off what was a good day for the defensive backs. Redshirt sophomore safety Malik Dixon will be a glue guy for this group.

9. Receiver depth challenged: The Huskies have a deep receiving corp that features Nigel Fitzgerald, Aaron Turner, Cam Ross and Ethon Williams among others but this group has been banged of late according to Mora. Despite that, I thought this group did a good job of making plays in space when they did touch the ball.

10. Transfers will make an impact: There is no doubt after watching UConn in the spring and now in fall camp that the transfers Mora and his staff brought in will make an impact. Several transfer not named Fitzgerald, Guidone or Bembry could play a big role on this team as the season wears on. Linebacker Brandon Bouyer-Randle (Texas Tech), wide receiver Dajon Harrison (Texas) and Chris Shearin who had the interception of Roberson could all make a big impact this season. This team needed a talent infusion and these guys provide that.