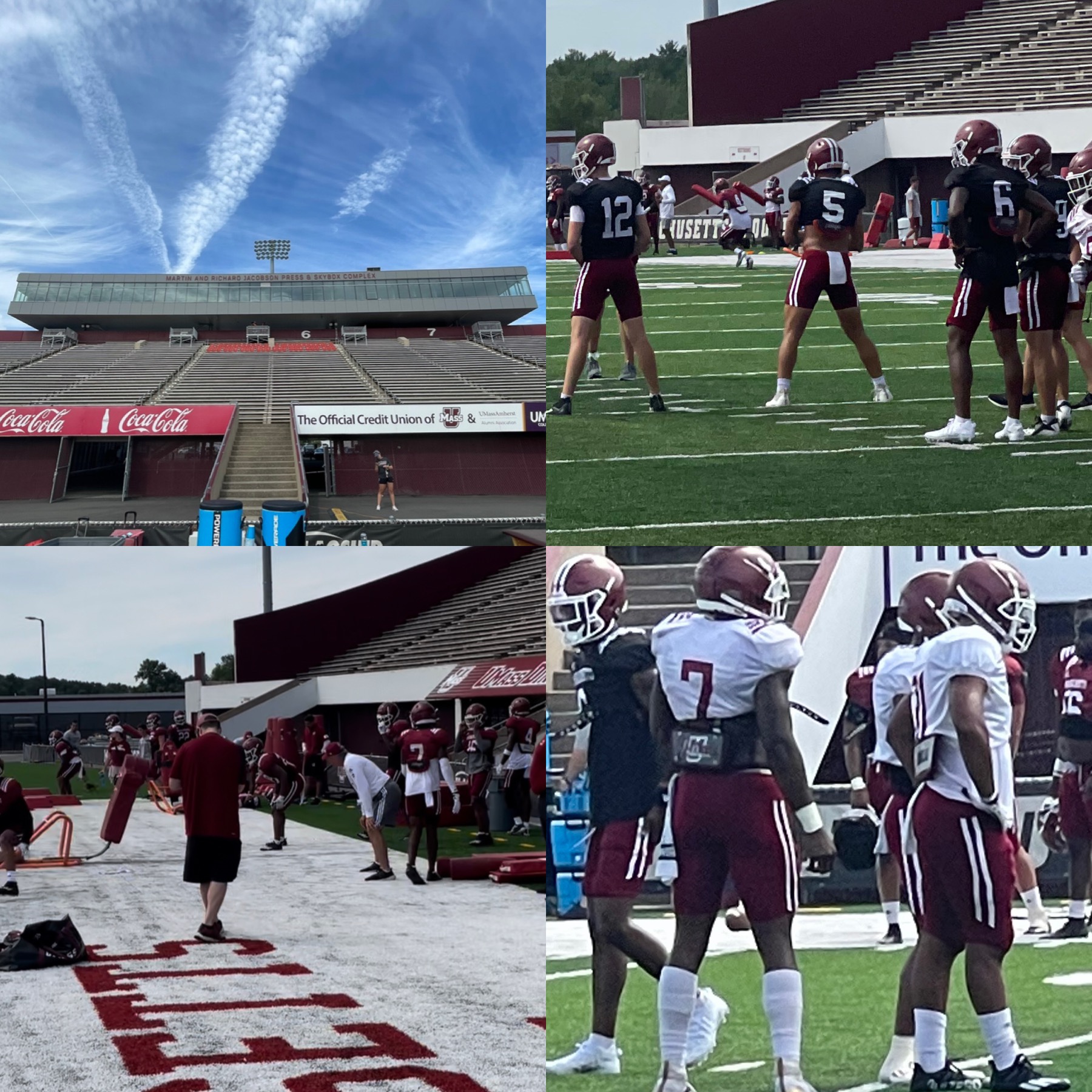 We visited with the UMass Minutemen on Thursday. It was their first day in pads and as you can imagine, it was a lively, spirited practice and that is putting it mildly.

1. Don Brown is as intense as ever: When it comes to intensity, very few coaches can match Don Brown. He was in mid-season form as soon as we walked into practice. He didn’t mince words with his players and he coached them hard. He maintained that intensity throughout the practice. He commands respect and still one of the best teachers in the game.

Quarterbacks Zamar Wise and Brady Olson get some work near the goal line. @newftbj pic.twitter.com/kG418J8JWy

3. Legit depth at running back: We all know how good Ellis Merriweather is. He’s a workhorse but UMass can’t run him into the ground. Luckily they have quality depth in KayRon Adams, Greg Desrosiers, Tim Baldwin and Cyrus Bonsu. All four had a good practice and displayed a diverse skill set.

4. Casula’s calmness: Offensive coordinator Steve Casula is a terrific coach and part of the reason is his demeanor. He is a great teacher and hardly raises his voice. He is a great complement to Coach Brown.

5. Tight end Josiah Johnson could be a weapon: The former quarterback has been carving out a role for himself in the offense the pas two seasons. He is poised for a breakout season both at tight end and possibly in direct snap packages as well.

6. Josh Atwood moves to center:The former Natick High School star looked comfortable at center. Atwood plays with good bend and leverage. As a former wrestler, he understands angle and positioning and he moves well in space which should help the offense in the lateral running game.

7. Secondary is long, athletic and competitive:The secondary had its moments in 7 on 7 but there is one thing you can’t deny. This group is long and athletic. Brown is going to be able to mix and match depending on down and distance thanks to this versatile group of defensive backs. There is young talent in this group but also veterans like sophomore safety Te’Rai Powell and junior corner Josh Wallace.

8. Transfers settling in: The transfers seem to be settling in especially quarterback Gino Campiotti, defensive end Marcus Cushnie, running back Greg Desrosiers and offensive lineman Cole Garcia. All four had solid practices and will make an immediate impact this season.

9. Perimeter skill: The receiving corp looked really good I thought. They competed and made a bunch of plays as well both in team and 7 on 7. They have a lot of size too. Tight end Eni Falayi, wide receiver Onuma Dieke made some plays as did Jaquan Gibson.

10. Brown preaches safety: At the end of practice, Brown told the team he loved the way they practiced and he commended their effort. He also preached safety and staying up. He stressed that beating each other up at practice was pointless and that they need to take care of each other. Brown reiterated that he I didn’t want to go to Tulane with 50 guys.