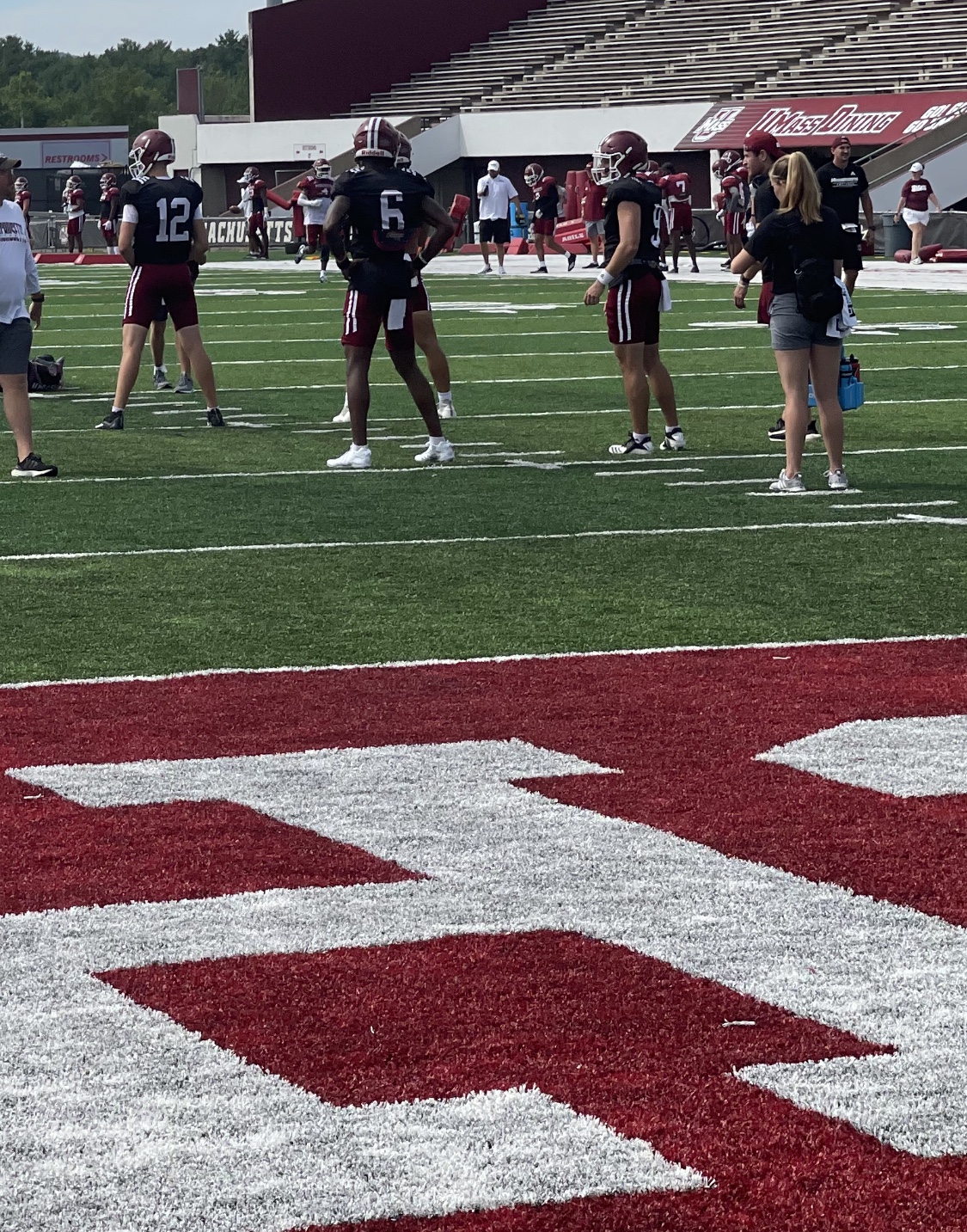 AMHERST — Sifting through the evidence at practice for UMass as the team looks for a starting quarterback can be a fruitless exercise.

You see Brady Olson make a dime of a touchdown pass on a throw that not many can make, and he looks like the guy.

But then you watch Zamar Wise or Gino Campiotti make an electric run in full team drills, and you think, well, it’s got to be one of those two, right?

After Thursday’s practice at McGuirk Alumni Stadium, you could plausibly make an argument for any one of those three. Chase Brewster and Garrett Dzuro also had their moments, but the guess here is it will be one of Olson, Wise, or Campiotti.

The bottom line is no one has really won the job yet. But coach Don Brown isn’t panicking.

Of the statement that the title of best quarterback on the team seems to change with each snap, he said, “Pretty fair. When we sit down and have those discussions, everybody has their moments. Everybody has their strengths. We are just going to keep letting it play itself out.”

Maybe if Brown had to make a decision tomorrow, he’d be a little stressed out. But the opener at Tulane is Sept. 3. There’s no need to rush a decision that has not made itself obvious yet.

Both Brown and offensive coordinator Steve Casula laid out some criteria on what they’re looking for from a starter.

“Well, there’s a hundred of them,” Brown said. “One, decision making. Two, the ability to run. Three, the ability to throw the rock. Four, to be able to discern fronts, coverages, where to go with the ball. There’s so much that that guy has to do. We’ve got a lot of work to do. We’re still crunching. But it’s a good group. I like the way they’re working.”

“Every one of those guys has shown me a trait, or a play, or a group of plays that show us they can help our team win football games,” Casula said. “That’s what it was about. Quarterback’s responsibility here at the University of Massachusetts is, number one, don’t put our team in a position to lose the football game. Number two, it’s to take care, play every snap with that in mind. Protecting the situations in down and distance. Understanding how aggressive I can be on a first and 10 vs. a third and 7. And how sometimes throwing the ball away on a third and 7 is great, because it becomes about field position and the kicking game. So constantly being mindful of that. But I can’t say enough about that group. I love them. I love coaching them. Fun to be around. There’s oftentimes they make me look smart.”

At times, Olson looks like the best passer. He puts good velocity on his throws, and is usually accurate when he gets time. He made one touchdown pass to Jacquon Gibson from about 25 yards out that was put in a place only the receiver could get it. All told, it was probably the best throw of the day by any quarterback.

Both Campiotti and Wise are probably the best runners. Wise is a smooth athlete who can make people miss and find another gear at the second level. Campiotti also has some explosiveness to him.

It will be interesting to see how this progresses, but Brown and Co. have some good options. No matter who wins the job, he will have some traits that can help the Minutemen be successful.