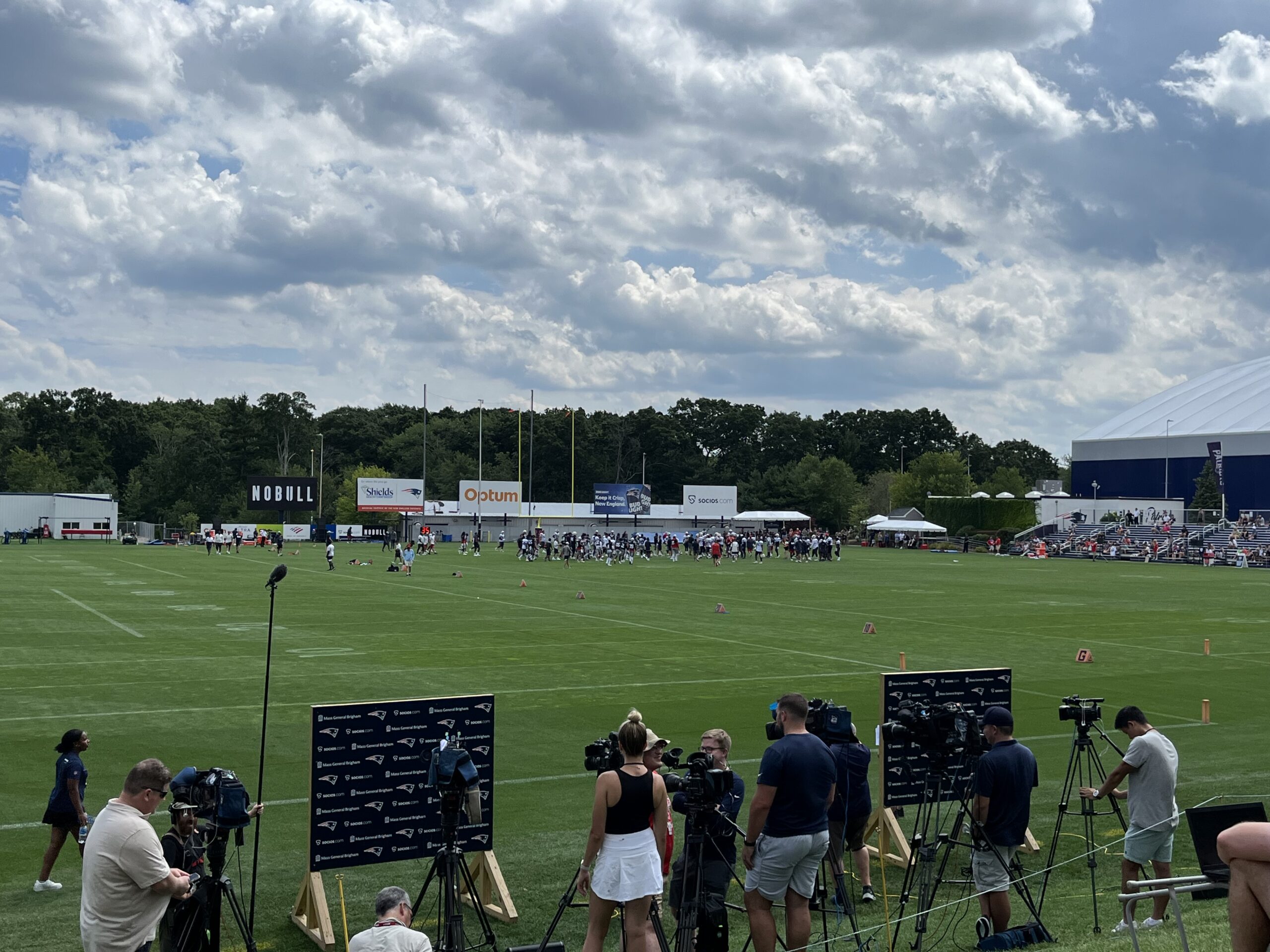 After a putrid practice for the offense on Monday, things looked a bit better on Tuesday. The team moved practice from 4 to noon in order to beat any thunderstorms, so the guys got the full dose of heat once again.

This was a day where the staff seemed to want to slow things down a bit, coach more and ultimately get the running game going first and foremost since there’s now a game in two days.

-Terrance Mitchell’s streak of being the first guy out was officially snapped on Tuesday by an unlikely teammate…Mac Jones. Jones was out extremely early and went to the far side of the field to get what appeared to be some cardio in. Ty Montgomery wasn’t far behind Mac.

-Smallest crowd by a mile. Between the time change and the heat there MIGHT have been 150 people in the bleachers for this one.

-Lots of individual position work early on. One thing that stood out when safeties were working on the goal line was when Jabrill Peppers ran a quick route against Josh Bledsoe and completely torched him. He could probably play receiver.

-7-on-7 work started at 12:43 and went until 12:55. Biggest play of the period was a great jump ball catch by Lil’ Jordan Humphrey from Zappe in the back left corner of the end zone. During this time, Davon Godchaux, Lawrence Guy and Carl Davis were working individually with bags.

-Kick off work from 12:55-1:00 with JJ Taylor handling most of the receiving duties. Meanwhile, Damien Harris and Rhamondre Stevenson ran a few slants on the opposite field with Mac to stay loose.

-First bit of 11-on-11 from 1:00-1:20. This wasn’t full speed by any means and the first offense went against the scout team defense, but Stevenson, Harris and Montgomery all had holes to hit and made a few nice cuts. Baby steps for the running game.

-Matt Slater worked on downing punts inside the five at this time. The greatest job in the world is either a gunner or kicker. Talk about easy street.

-Mac was picked off by Harvey Langi after a ball deflected off Kendrick Bourne. A play or two later, Deatrich Wise accidentally took Mac to the ground on a rep but sort of held him up once he realized a lap for him was probably on the line, pretty funny to see.

-With 1’s going against 1’s Bryant had a nice PBU on a back corner fade to Jakobi Meyers.

-A bit of ugliness returned when Hoyer had to throw a ball away near the goal line.

-Devin McCourty should have had an interception in the back of the end zone but couldn’t hang on to a ball thrown by Hoyer. Jack Jones had a nice PBU near the left pylon towards the end of the period.

-Pats worked on some punt stuff from 1:20-1:25. During this time – and it’s something I just started to notice on Monday – Peppers ran full sideline-to-sideline sprints on his own several times. He did it later on during practice as well.

-More 11-on-11 team period work from 1:25 to pretty much the end of practice. A few snaps into this one came the most entertaining part of the day, a legitimate scuffle/fight between David Andrews and Christian Barmore. Guys immediately tired to jump in and break it up, including Mac until he sort of thought better of it and shuffled his way towards the outside of the giant pile. Barmore was kicked out of practice completely, while Andrews was too, but he went to the hill to run sprints before hanging out near the hill until the end of practice. Probably better not to have those two behemoth’s in the locker room together.

-Kevin Harris had a few nice reps running the ball with the 2’s. Matt Sokol had a nice grab in the back corner of the end zone from Zappe and Mac had a nice ball to Jonnu over the middle at one point after a well-ran play action fake.

-Josh Hammond dropped a well-thrown long ball from Mac in the back of the end zone late. DeVante Parker added one more highlight reel catch towards the end of the day, going up for another jumping grab with Jonathan Jones on him. He’s made at least one spectacular catch a day.

The Patriots will have a walkthrough type practice on Wednesday that’s closed to the media and public. The first preseason game should answer some (not all) questions we’ve had.

The next open practices are the joints with Carolina next Tuesday & Wednesday ahead of their preseason game Friday night.