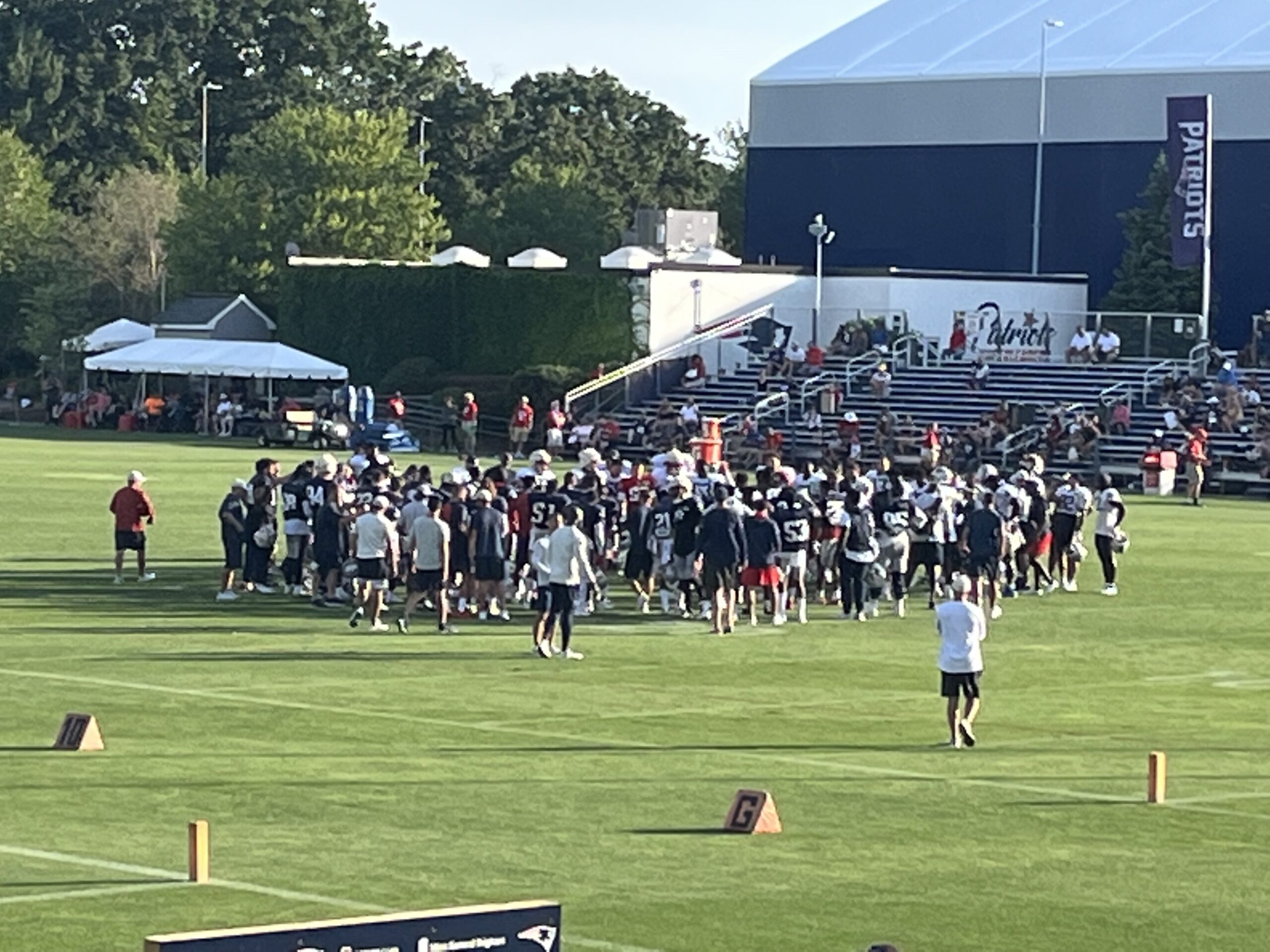 That’s the only way to describe practice No. 10 on Monday afternoon. There’s been quite a bit of chatter about how poorly the offense has looked, but Monday may have been rock bottom. It was ugly, but let’s get into some sights, sounds and thoughts from the two-hour session…

-While Terrance Mitchell wasn’t the first guy out for the in-stadium practice last Friday, he was again on Monday, which means he’s either 9-10 or 10-10 depending on if you count the one Friday. Brendan Schooler, Marcus Jones and Malcolm Butler all followed.

-Jonnu Smith’s kid gave a big “hi dad!” yell as Smith walked out and he smiled and waved. Marcus Jones, Jack Jones and Peppers worked the punt machine early and Tre Nixon joined them later on.

-This was hands down the smallest crowd all camp, with maybe 400 people there. The heat actually wasn’t the bad with a stiff breeze the entire afternoon, so maybe people are already sick of watching this offense.

-While doing sled work, the O-line rotated through and pushed it from the end zone all the way up to the 50.

-Nixon had to do pushups during an individual receivers drill. Not great.

-At 4:32 1-on-1’s started things off and it was all defense early. Myles Bryant and Jack Jones made early PBU’s over the middle and Marcus Jones added one against Josh Hammond.

-DeVante Parker did have a great shoe-string catch with Jonathan Jones in coverage. Kendrick Bourne dropped a deep ball that went right through his hands with Bryant on him.

-Tyquan Thornton had his best day of camp on Monday. Early on in the same drill he hauled in a deep ball from Mac over Mitchell.

-On the last throw of the drill, Mitchell picked off Mac on a ball intended for Parker. It was a sign of things to come.

-Receivers and DB’s started a two-on-two stacked formation drill at 4:40. Hunter Henry burned a couple guys going over the middle, Kristian Wilkerson beat Butler on a comeback and both Nixon and Thornton burned defenders while running quick routes over the middle. Thronton’s ability to run smooth routes continues to show itself.

-At 4:44 the Pats went to 11-on-11’s. By 4:44:01 Trent Brown false started on the very first snap and had to run a lap. Bentley blew up an early run in the backfield on a hand off to Damien Harris and Marcus Jones had a nice PBU against Jakobi Meyers on a jump ball.

-Barmore had a late would-be sack and the drill ended on a quick Meyers completion. The ending felt rushed a bit, almost like a little league coach telling a player “let’s end on a good note.”

-Bailey bombs returned at 4:55 for a few minutes, with the stud punter touching just under 5 seconds on hang time routinely. Jake Julien also had some impressive punts as well. Marcus Jones, Bryant and Peppers all fielded punts.

-4:58 marked the start of another lackluster 11-on-11 period before 7-on-7’s began at 5:05. It’s stunning how much cleaner the offense looks when the O-line isn’t on the field. The play of the day – and really the only one fans could cheer for – was a back corner, leaping catch by Parker in between Bryant and Jonathan Jones. At this point, tight end Devin Asiasi also walked off the field with a staffer.

-Back to 11-on-11’s at 5:13 pretty much for the remainder of practice. Mac had to scramble early, then had a brutal miscommunication with Henry on a deep ball down the right sideline. Butler had a nice play against Agholor on a deep ball and on one particular play Barmore, Marcus Jones and one other player (couldn’t see who) converged on Mac for a would-be sack.

-Pierre Strong had a few good reps both as a pass catcher and a runner when the two’s took over. We saw quite a bit of Hoyer and Zappe as the two get ready for the preseason game on Thursday night.

-After a brief period of the “open field” drill – where Agholor juked Justin Bethel out of his shoes – it was more 11-on-11 starting at 5:44. On the first snap, Mac was picked off by Jalen Mills on a ball intended for Bourne.

-Moments later, Jonathan Jones should have had a pick against Mac after jumping an RPO route to Thornton but it clanged off his chest.

-Butler had a good PBU against Thornton a bit later before two-minute work started.

-Fittingly, Josh Bledsoe ended the practice with a pick of Hoyer in the end zone, with a few players on offense visibly showing their frustration.

Not much else to say other than the offense is a mess right now. Part of me thinks we may be underrating the defense a bit at this point, but we won’t know until things go live for real on Thursday. The Patriots practice at 4 P.M. again on Tuesday (open to the public, gates open at 3) before taking Wednesday off.