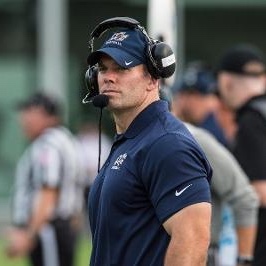 Dan Curran’s squad was up and down at times last season but there is no denying that the Warriors were one of the most talented teams in the NEC.

Merrimack must replace key pieces like Westin Elliott, Shawn Page, Clay Legault and Caleb Holden but the cupboard is well stocked in Andover thanks to some great recruiting and the transfer portal.

Here are three things we will be watching in fall camp.

1. Quarterbacks: UConn transfer Jack Zergiotis will be the favorite to start but he won’t be handed the job. Curran preaches competition so expect him to have to beat out returners like sophomores Malakai Anthony and Jack Esquivel among others to be the starter.

2. Skill galore: Whomever the quarterback is, they will have a bevy of skill players to throw the ball to. Tyler Roberts, Jacari Carter and a stable of talented running backs on the roster are all capable of making big plays in the passing game. the The Warriors have plenty of firepower in their arsenal offensively.

3. Front seven: We know the Warriors have plenty of talent on the back end with McKenzie and Witherstone but the front seven needs to step up and support the secondary with a consistent pass rush. Veteran defensive end Corey Hagerman is a player to watch. The senior has the skill set to juice up the pass rush.

Final analysis: Merrimack was picked fifth in the preseason NEC poll but this team is better than that. There is plenty of talent on hand and with a strong camp, the Warriors can position themselves to be a dark horse in the NEC.