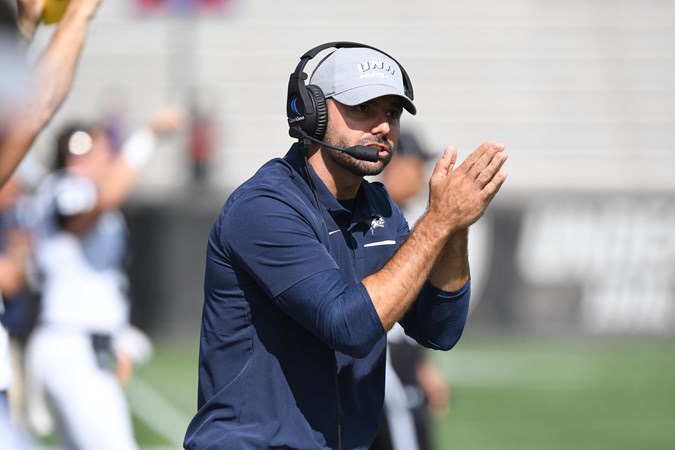 The UNH Wildcats are opening their first training camp since 1998 without Sean McDonnell at the helm of the program. After 22 years on the job, McDonnell retired after last season.

In steps Ricky Santos who served as interim head coach when McDonnell took a leave of absence in 2019.

Santos inherits a roster with talent but the Wildcats battled injuries and inconsistency last season en route to a 3-8 finish. They were picked to finish 9th in the CAA pre-season poll.

Here are three things we will be watching at fall camp.

1. The return of Max Brosmer: Brosmer missed last season with a leg injury. The Roswell, Georgia native is now healthy and ready to lead the program again. There might be some rustiness early but Brosmer will workout the kinks and position himself to start again.

2. Front seven on defense: The Wildcats will have one of the best front sevens in the CAA led by senior defensive tackle Niko Kvietkus and sophomore defensive end Josiah Silver. They are both a force especially at rushing the passer. Add to that a talented linebacking corp and safety Pop Bush and this defense should be one of the best in the conference.

3. Running backs: UNH should have a potent running game with junior Dylan Laube leading the way. Laube is a workhorse who can impact the game in a myriad of ways. Sophomore Issac Seide provides good depth and there are other backs who can factor into the offense as well. Look for the Wildcats to lean on their running game early as Brosmer rounds into shape.

Final analysis: The Wildcats will be a sleeper in the newly revamped CAA. Santos is passionate about the program. He has a good staff and there is talent on the roster. If Brosmer can stay healthy and give the Wildcats consistent quarterback play, they will surprise some of the doubters this season.