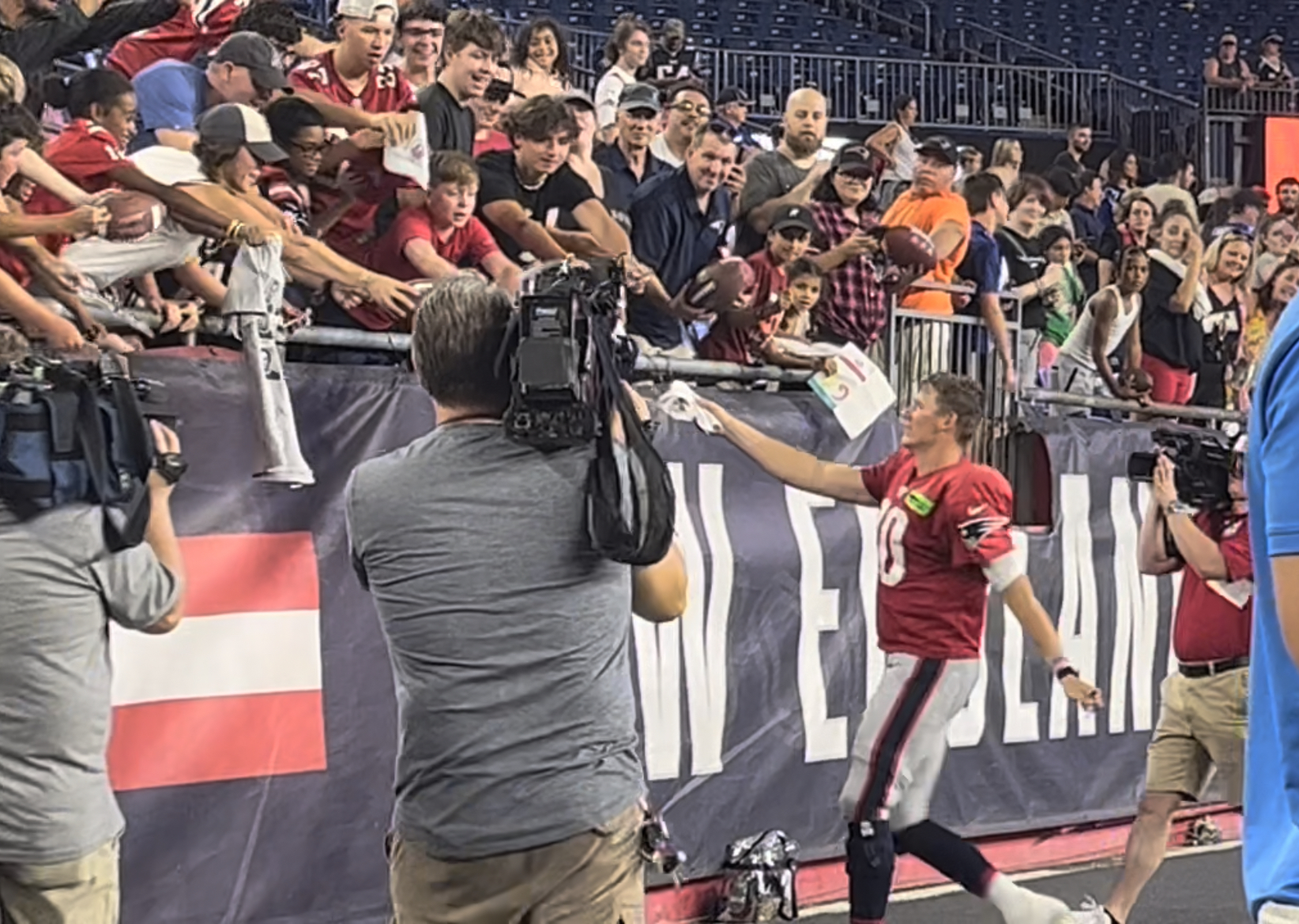 For the first time in 2022, the Patriots played some football inside Gillette Stadium on Friday night.

The annual season ticket holder and Foxborough resident practice drew a good crowd that almost filled the lower bowl. A rainbow came out after vicious thunderstorms just before the Patriots took the field, but it wasn’t a good omen as there’s still a lot to figure out about this team with inconsistency rearing its ugly head again.

There was some interesting things to see and hear inside Gillette…

-The 8-for-8 run that Terrance Mitchell had being the first guy out ended as Tristan Vizcaino, Jake Bailey and Nick Folk were the first guys to take the field. Jake Julien joined them a bit later.

-Mac and Hoyer ran out of the tunnel in game day-like fashion right at 7:00 after practice was pushed back a half hour. Both guys did the Brady run down the Pats’ sideline to a huge roar before the “let’s go” fist pump in the end zone.

-Mac and Damien Harris shared their elaborate pregame (maybe pre-practice? Haven’t noticed until tonight) prior to warmups. The bond between the two Bama boys is always there.

-Patrick Chung and his son were on the field during pregame warmups and lightly going through the various stretches with players. Chung looks like he could still suit up.

-Jahlani Tavai – who was hurt at the end of Wednesday’s practice – stood on the sideline but wasn’t in uniform.

-Around 7:20 some light 7on-7 and 11-on-11 work started, but it was at a walkthrough speed on both ends of the field as the crowd continued to file in. Extra points at the closed end of the stadium followed.

-Damien Harris played a little DB against Chung’s son on one end of the field during the PAT work. Harris let him have a few catches instead of earning the PBU’s.

-Dugger and Montgomery were back to receive the opening kick off for Team Blue once the scrimmage got underway. There were 45 minutes on the clock, running time.

-Mac led the Team Blue offense. On the second play from scrimmage Damien Harris busted through for a would-be 70ish-yard TD run.

-Matt Patricia had the walkie talkie for Team Blue with the offense on the field. Steve Belichick appeared to be calling the plays for the White Team defense. Joe Judge looked like he was calling the Team White offensive plays.

-Actual chunks of yards weren’t necessarily counted after plays as the offense repped a few different times from the 30 before moving towards midfield. Mac had a nice ball to Kendrick Bourne on the “road” sideline and then a nice comeback completion to Jakobi Meyers early on.

-JJ Taylor had a nice run for Team White early after Team Blue punted. These “drives” weren’t full drives and the pace wasn’t full speed, but it was clearly a way for guys to at least get a small feel of the game day atmosphere inside Gillette.

-Bentley would have obliterated Taylor if this was full speed a few players later after he blew through the line.

-Lil’ Jordan Humphrey hauled in a pass from Zappe on the right sideline with Jonathan Jones on him, moving the ball to the 20-yard line.

-Kevin Harris had a 20-yard TD run and then the team worked on situational hurry up offense, sprinting back to the line before a dump off in the flat to Harris that probably would’ve gone for a TD as well. Nicely ran drill by Zappe.

-Vizcaino hit back-to-back field goals from about 35 and 45-yards to cap the first Team White drive.

-Great kick off return by Montgomery up the right sideline for Team Blue’s second possession. Is he the guy I’ve been clamoring for? Ultimately, I still hope it’s Marcus Jones, but as I keep saying, there’s plenty of options there.

-With the ball at the 10, Nelson Agholor went up for a back-corner jump ball and came down with it inbounds against Justin Bethel. After repping another run play from the 10, Josh Bledsoe won a battle against Jonnu Smith in the end zone to grab a pick against Mac before doing a Deion Sanders-esque shuffle.

-Jake Bailey put the kick off out of bounds and had to re-do it with Tre Nixon back receiving for team White’s second possession. Nixon had a pretty nice return on the second kick.

-Nice comeback route for Tyquan Thornton against Adrian Phillips near the right sideline, Zappe put it right on him. Zappe’s arm is legit, just not always accurate.

-Kyle Dugger muffed a punt with about 13 minutes left on the 45 minute clock.

-Josh Bledsoe ended up picking off Mac after a ball bounced off Nelson Agholor’s shoulder.

-Once the original 45 minutes ran out, media members, fans and even a few Pats’ staffers were surprised to see another 45 minutes go back on the clock after a five minute break for a second “half” of football.

-Was at field level at this point so as a shorter guy my view was limited. However, I did see Scott Pioli roaming the sideline and an early Myles Bryant muffed punt, but that was largely do to another Bailey bomb making life difficult.

-We got our first training camp skirmish of the season when Justin Herron and Josh Uche had to be separated, much to the delight of the crowd.

-Arguably the highlight of the night came from a fan wearing a Miami Heat Dwayne Wade Miami Vice jersey and high pink socks. This guy was absolutely berating both Mac Jones and Bill Belichick from the Optum Field Lounge for at least 10 minutes. “Throw another pick, Mac!” and “You Suck Mac” were sandwiched around “You haven’t won a playoff game in three years Bill!” and “You’ll never win another one without Tom, Bill!” while Belichick could absolutely hear him given the proximity of the fan. He was finally told to stop (I think) after a while and walked back into the lounge.

-A few minutes later, Tre Nixon fumbled after catching a ball and Henry Anderson recovered. Anderson has had a very good camp.

-Ty Montgomery continues to be one of the few bright spots on offense, consistently making plays whether it’s a run or as a receiver.

-Mac continued to struggle to find open receivers and ended up having to tuck and run. He can definitely move when he has to (ideally, it’s not this much) and the fans erupted when he took off for a pretty big chunk of yards.

-It wasn’t all terrible. There were a few plays that sent the fans home happy. Brian Hoyer hit DeVante Parker for a deep ball TD over the middle, with Parker torching Brendan Schooler by about 10-yards. Hoyer also dropped a ball in the bucket for a TD down the right sideline to Kendrick Bourne (over Shaun Wade) and Zappe hit Tyquan Thornton on a quick throw over the middle for a TD. Thornton then reverse-dunked on the goalpost for an impressive celebration.

-One final punt ended things before Coach Belichick broke the team down at midfield and then players scattered around the stadium to sign autographs after what turned into a long night of practice.

We still have more questions than answers on both sides, but Friday night was more about guys getting a game day routine down and getting a feel for what things will be like next Thursday night when the Giants come to town for the first preseason game.

The Patriots are now off Saturday and Sunday before returning for open practices on Monday and Tuesday next week (9 A.M.)