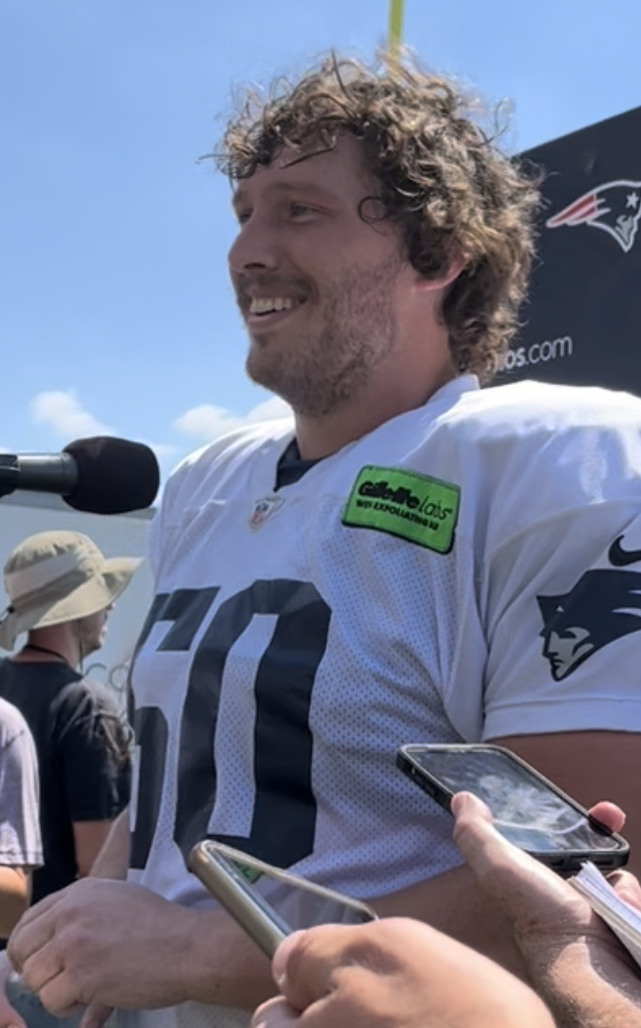 It’s a strange new world for the Patriots’ first round draft pick.

Sorry, that was so lame, but I had to do it.

Cole Strange spoke to the media following practice on Thursday afternoon and sounded like you’d expect a wet-behind-the-ears rookie to sound like. Luckily for him and other rookies in his position, football is a game after all and while most days in the Bill Belichick era have no room for fun, there are some exceptions to the rule.

Before the eighth practice session, Strange and other Patriots rookies got to experience slip & slide day.

A Patriots staffer soaked a corner of the field for a while before practice as is tradition, and then with the team huddled around, Matthew Slater took over hose duties, spraying guys down and also spraying the football while the rooks’ had to try and recover it for about 15 minutes or so.

“I feel like I practiced better today, so maybe we should do it more often,” Strange joked. “I don’t know if anybody else would be a fan of that though. Slater had the hose and was just spraying us in the face. They were spraying it for like 10 minutes before practice and so, it was like a fumble recovery thing where we’re supposed to go and grab it.

“The thing is, as soon as Matt threw (the ball) on the ground, he would like aim (the hose) right at the ball, so you’d dive and miss. He’d get in there for like five seconds and just spray your whole body, but I had fun.”

After getting his first full week in pads out of the way, Strange portrayed a quiet confidence about where he’s at, but knows there’s obviously plenty of room for improvement.

“I thought it went well,” he said. “It was difficult and there was things that I messed up, but I think there’s a lot that I did well and so, you know, there’s a lot to work on, but I feel good about it, for sure.”

Understandably, Strange didn’t really have any time to set expectations for himself or anything like that prior to minicamp or training camp, rookies are simply in survival mode this time of year.

“Honestly, I guess I didn’t think that far ahead,” Strange said with a grin when asked if anything surprised him or what his expectations were. “It was more of like a, ‘let me get this one rep in front of me,’ trying to be very shortsighted and not look too far ahead, right now at least.”

Christian Barmore isn’t a veteran, but Strange has quickly learned things aren’t nearly what they were when he was playing for Chattanooga when he’s had to go up against his new teammate. This type of competition is helping the rookie hone his craft with quite a stiff test in front of him daily.

“He’s a great guy to go against, honestly, I feel like all of them are,” said Strange. “There’s a lot of great competition. Every time we do that I feel like I’m getting better and hopefully getting them better too.”

Strange is also making sure he eats up whatever kind of coaching Bill Belichick has for him.

“I feel like it’s a huge advantage, you know? If I mess up on something, and he comes over there and works with me, he pretty much tells me what it is I messed up on and I can watch it on film and be like ‘ok, I see exactly what he’s talking about’…big help.”

Simply because of where he was chosen in the draft, Strange is going to have high expectations placed on him. Fair or unfair, that’s life as a first rounder. The good thing is that Strange understands he’s got a long way to go to squash any doubts from a worried fan base about another wasted draft choice, but there’s an “aww shucks” type of demeanor that may help him ignore all that noise and just play ball.