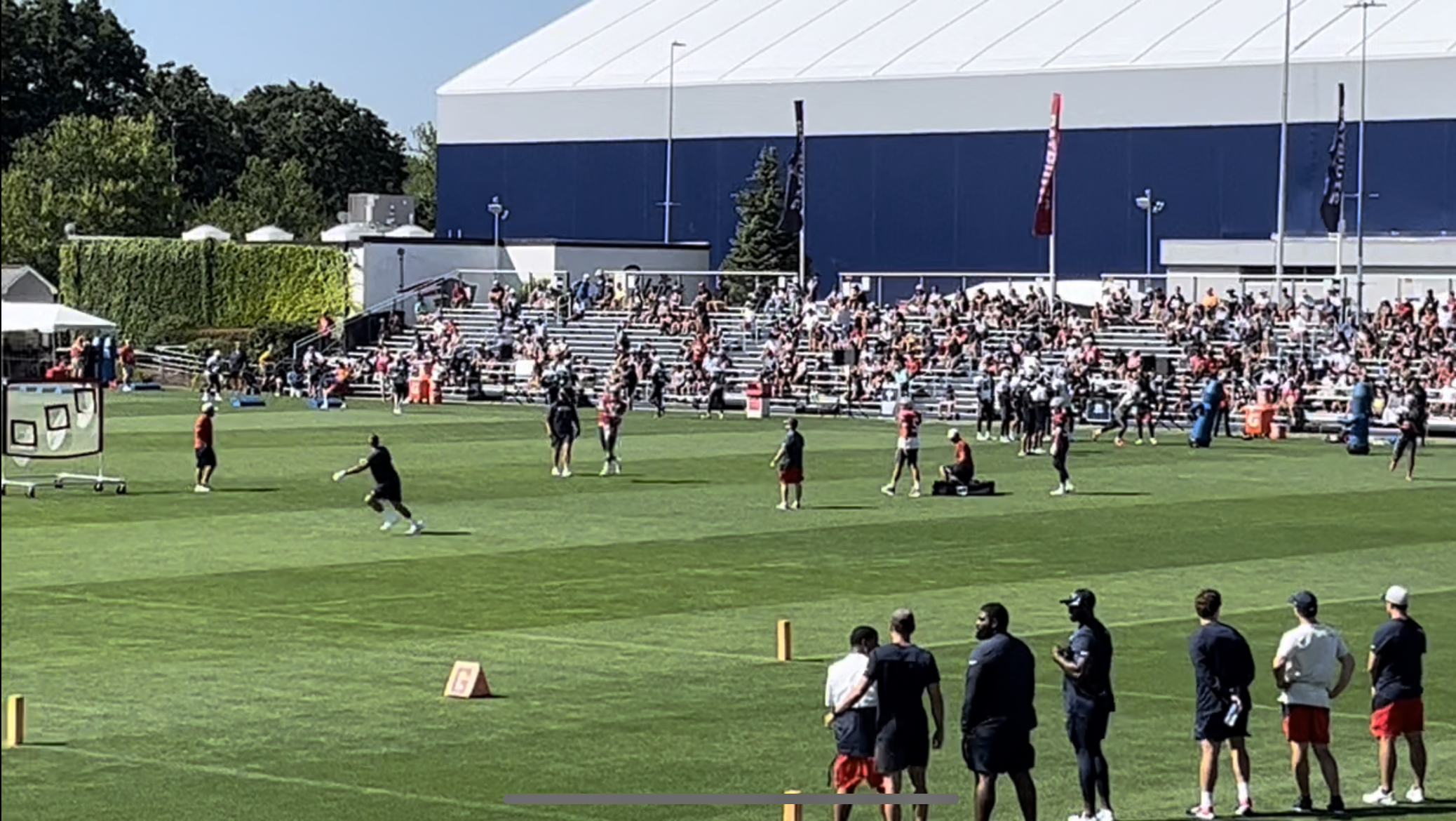 Jumping right into it today…

-Eight practices, eight straight days being the first one out for Terrance Mitchell. Today may have been the longest period of time in-between Mitchell’s arrival and the next guy out, which was Jalen Mills followed by Malcolm Butler.

-Practice got going a bit late today, but for a good reason. It was rookie “slip & slide day” with Matthew Slater manning the hose. A staff member watered down one patch on the far field for a good 10 minutes or so before the team came out. With a Bill Belichick team there is always an element of competition, so rookies had to slide through while trying to recover a loose football. At times, Slater would put the hose right on the ball to make it bounce in various directions. in almost 100-degree heat, the young guys didn’t mind going through practice soaking wet.

-During the stretch period you could see a few guys trying to dump water out of their cleats, which is obviously the only downfall to the soaking.

-This was the smallest crowd by far with the het clearly playing a factor. Mac still received the loudest ovation when he came out, but it was nothing compared to some of the others he’s gotten.

-Back in pads, the first bit of competition got going at 10:00 on the dot with safeties and tight ends going 1-on-1. Jonnu Smith – who had arguably his best day of camp so far – had a great grab over Josh Bledsoe on a ball from Brian Hoyer. Adrian Phillips was all over Hunter Henry on an early rep and Kyle Dugger was draped all over Devin Asiasi on another. Overall, the competition clearly went to the defense.

-Robert Kraft strolled the sidelines around this time after the Kraftcopter made one of two appearances on the day.

-At 10:05, the wide receivers and defensive backs began 1-on-1’s as did the big guys up front. The drill was built more for focus on pursuit from a defensive perspective, with a running back taking a quick toss or catching a screen before a defender had to try and shed a blocker to make a tackle in the open field.

-As usual, Christian Barmore continued to stand out throughout the day.

-On the offensive side, Dugger had a great pass break up against Tre Nixon and Joejuan Williams had one against Lil’ Jordan Humphrey. Josh Hammond hauled in catch on a nicely ran slant while going against Jack Jones and DeVante Parker had a pretty comeback route snag with some good coverage by Justin Bethel. The biggest play of the period was a catch from Nelson Agholor over Jones on a ball from Hoyer.

-One’s v. two’s kicked off the first bit of 11-on-11 at 10:17. Jack Jones had a great PBU on a deep ball against Agholor on one of the earlier reps. Smith brought in a ball on a well-thrown wheel route with Brendan Schooler on him. Joejuan Willams made a nice effort to break up a pass on the sideline to Humphrey and Mac showed some nice touch on a throw over the middle to Jakobi Meyers with Bethel in coverage. Ty Montgomery had a nice catch towards the end of the period against Marcus Jones.

-Usually, 7-on-7 has given the offense the ability to look better than it has in 11-on-11, but that wasn’t the case from 10:17 to 10:32. On the very first snap, no one could get separation as Mac had to step up and scramble, something he’s shown he’s capable of doing, but something he’s also said he doesn’t really want to do. Things got better, but it still wasn’t an ideal period.

-Another open field drill emphasizing pursuit and tackling and then some kick off work from 10:41-10:53 took us into the longest bit of 11-on-11 we’ve seen so far this camp (I think). Actual drives were put together instead of just drilling, although there was some situational repeats (do overs?) during this time.

-On the first drive, Meyers hauled in a slant with a great snag against Myles Bryant. By the third or fourth snap, Mac was sacked but probably could’ve gotten rid of the ball quicker.

-During this time, Tristan Vizcaino hit bombs into the family and media tent. It’s the most chaotic part of practice by a mile.

-Tre Nixon had a fantastic catch going over the middle against Mitchell while Matt Patricia was calling plays. JJ Taylor made a nice cut to cap for a TD run.

-With Zappe running his drive, Anfernee Jennings stuffed a run early before Tyquan Thornton had a great grab in-between both Jack Jones and Schooler.

-There was quite a sequence for DaMarcus Mitchell at one point. Mitchell false started and ran a lap, then came back two plays later with a run stuff and then earned a sack against Zappe. During this span, Shaun Wade also made had a great diving PBU while covering Nixon.

-Music was added to 11-on-11 work at 11:08. By 11:09, Mac was flushed out again by Davon Godhcaux and appeared to face plant after tripping while running, but there’s also a chance he was working on getting down, tough to tell but it certainly wasn’t graceful.

-Jonnu added to his good day with a nice catch over the middle towards the end of the morning.

-At one point, Mac appeared to yell at the sideline after having little time to throw again, but I couldn’t really hear from my point. Whether he was yelling or simply asking a question or whatever it may be, the body language definitely doesn’t scream confidence at times.

-Nixon grabbed a great ball from Mac in the back left corner of the end zone against Malcolm Butler.

-Things ended on a down note for the whole team when linebacker Jahlani Tavai went down with an injury and was helped off the field.

We are now one week away from the first preseason game and there are still plenty of things to worry about. But, on the flip side, is it possible the defense is just going to be better than we all thought? The offensive line continues to struggle, but the skill guys have shown (at times) they can make something happen, so it can’t be this inconsistent, right?

Friday night’s in-stadium practice for season ticket holders (7 P.M.) won’t reveal much at all unless it’s a completely different script than it’s been in years past. The team is most likely off Saturday and Sunday, which means the open practices Monday and Tuesday ( A.M., gates open at 8) are going to be critical ahead of the preseason game against the Giants on Monday.