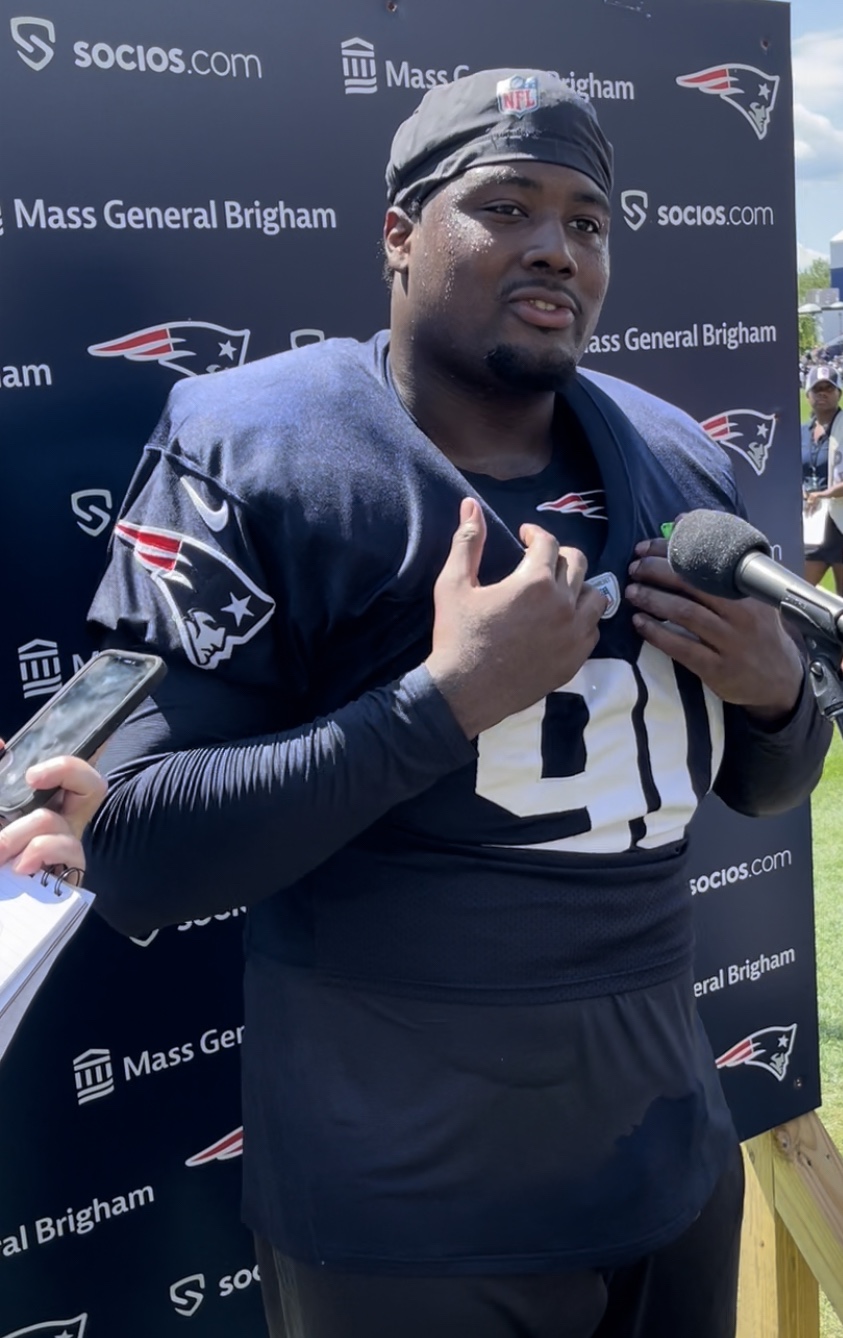 Second year defensive tackle Christian Barmore has been a force thus far in training camp. He has been virtually unblockable at times. Veterans and rookies alike are struggling to block him one on one and on double teams.

Barmore has come into camp in good shape, something that was a point of emphasis for him. He dedicated himself this off-season and the work is paying off thus far. He is also more comfortable in the Patriots defensive scheme, something Barmore acknowledged when he met with the media.

“It is way better than last year. I’m playing faster. I’m running, I’m faster. Barmore added: “I was training in Texas, in the heat. Lots of cardio, working on my feet.”

A more explosive Barmore is a scary thought for the rest of the league. Barmore’s size and length coupled with his explosiveness make him one of the most physically gifted defensive lineman in the NFL.

Patriots Coach Bill Belichick is not surprised at how far along Barmore is in this training camp compared to last year’s camp. Belichick cited Barmore’s participation in the off-season program as a big reason for his continued development.

” Christian’s done a good job. He’s way ahead of where he was last year. First of all, he’s in much better condition. Second of all, he has a much better understanding of what we do, what our opponents do, and the daily routine or the weekly routine of how the progression’s going to go, because he’s been through it. There were times, with all rookies, where they don’t expect it to be as much as it is, or they expect it to be more than what it is. Maybe fatigue they can’t get through, can’t pace themselves, just because they don’t know. Now they know and they’re much better at that.”

Consistency has been an issue at times for Barmore throughout his career. It is also something that young players struggle with. Belichick however has seen a change in Barmore in terms of how consistent he has been thus far this off-season and in camp.

“He’s been more consistent, like all second-year players – this isn’t really unique to him – but he’s been more consistent. He has a better understanding of our scheme, the opponent’s scheme, what can happen, what’s a problem, how to handle those problems when they come up. And his physical development, his techniques, his skills: overall strength, speed, stamina, have improved. They were good anyway, but they’ve gotten better through training. He’s making progress.”

The improvement in consistency is a direct result of Barmore being more focused on improving in certain areas of his game. Especially playing the run.

“I want to play the stretch better, play the run better, using me feet. Playing the run was my number goal.”

Barmore also recognizes that versatility is a big part of his value to the team. Being able to line up in multiple alignments is something he takes pride in.

Barmore is also more confident which is also a scary proposition for opposing offensive lineman. When asked when was the last time he felt he lined up against someone who was a bad physical match up, Barmore simply shook his head and said nah….nah…nah.

Commitment, consistency and confidence are all essential traits to being a great player. It appears Barmore possess all three traits and he is ready to meet his enormous potential.