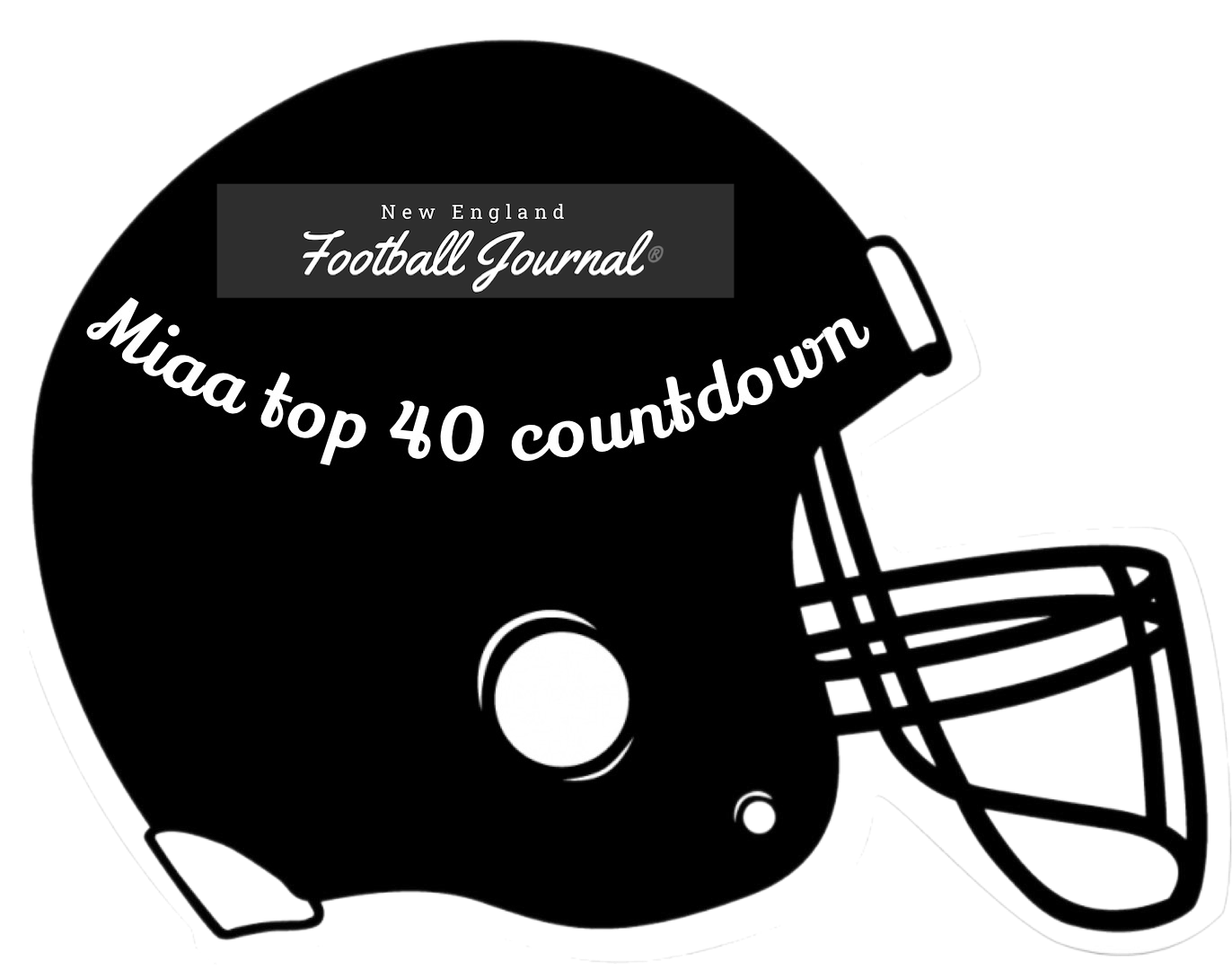 As the calendar turns to August, we once again kick off our high school coverage with the 40-team MIAA preseason countdown. Over the course of the offseason, we pared down this list from one of closer to 75. It was truly difficult to get the number down to 40. This is an exhaustive exercise each year, but fun to do.

We will start — in alphabetical order — with the 15 teams that just missed the cut for the top 25, then count things down all the way to number one.

And with that, we’re off. We hope you enjoy the content, and have a great season.

15 teams that missed the cut (in alphabetical order)

The Shamrocks had a successful run in 2021, as they beat rival North Attleboro at the beginning of the season and were eliminated from the D2 playoffs with a close loss to Reading. The main source of optimism around Feehan this year stems from strong play in the trenches. Case Mankins (6-4, 255), Eddie Cinelli (6-2, 270), Tristen Upton (5-11, 240), and Jake Gosselin (6-0, 240) are the names to watch there. MLB/FB Dante Bruschi is an instinctive linebacker, while Connor McHale (KR/WR/S), Nick Yanchuk (RB/OLB), and Cam Burns (RB/CB) are all dangerous with the ball in their hands. Nonleague tests with North Attleboro and Attleboro will be interesting, while a very good St. Mary’s team and Bishop Fenwick are the biggest hurdles within the Catholic Central League.

After a successful, 4-1 Fall II season, Brockton dropped to 5-6 last year, but still had some positives, such as winning the Southeast Conference for the second year in a row and making the playoffs. There is potential for greater strides this fall in coach Peter Colombo’s last year. It starts with a wide receiving group that will be tough to contend with, led by junior Cam Monteiro, who already holds D1 offers. The rest of the unit is strong with Christensen Paul, Mike Victor, and Matt Turco. Running back Kensley Rock has the coaching staff excited. Makhi Boston and Tsunami Resende anchor the lines, and defensive end/tight end Donovan Munroe has plenty of potential, as well.

Doherty has been one of the top programs in both Central Mass. and the state in recent years, consistently churning out teams that are both athletic and physical, and able to compete with just about anyone in the region. The Highlanders had a bit of an inexperienced team in 2021 and posted a 6-5 record. We project Doherty to improve on that this fall. There is a nice mix of largely junior and senior talent on Sean Mulcahy’s squad this year. Juniors include Malachi Burke (RB), Juan Reynolds (FS/WR), and Bryce Miller (OL/LB). Seniors to watch are Liam Bisnette (OL/DL), Khamani Lomax (OL/DL), Tim Moynagh (WR/QB/DB), and Ryan Flanagan (WR/DB). The schedule is tough with its usual CMass slate and a new date against Mansfield also on there.

A consistent power out of the Hockomock League’s Davenport Division is Foxboro, which should again be a team to watch. Last year, behind running back Dylan Gordon and a deep group of skill positions, the Warriors put together a 9-3 season. Along the way, Foxboro earned wins over North Attleboro, Plymouth South, Stoughton and Wilmington. The only losses were to Duxbury, Milford, and Mansfield. This year, Foxboro loses most of its offensive production, but should still be strong behind a very good junior class. That group includes WR/CB Tony Sulham, LB/RB Lincoln Moore, and DE/TE Brandon Mazenkas. Senior WR/S Payton Francis is also one to watch. The schedule is interesting with nonleague tests against Holliston, Whitman-Hanson, Plymouth South, Hopkinton, and a crossover Hockomock test with North Attleboro.

Melrose has been consistently one of the best programs in the state under coach Tim Morris. The program has always featured a strong defense and powerful running game. Melrose has most recently won state titles in Division 4 in both 2017 and 2019. And although the team had an uncharacteristic, 3-8 down year last season, five of those losses were by one score. We expect Melrose to bounce back both in the Middlesex League and the state. The offensive line should be a strength with Columbia-bound two-way lineman and captain Braden Marceau-Olayinka (6-3, 260), center and captain Jack Claeys (5-10, 225), and Charlie Krygowski (6-2, 240). The skill spots are led by running back/strong safety and captain Stephen Fogerty and wide receiver Otto Albanese. The Middlesex crossover game with Reading to open the season should be a good one.

Always one of the top programs out of the Cape Ann League, North Reading cranked it up a notch last year. The Hornets made it to the Division 5 state title game, where they fell in a close one to Swampscott, 14-7. With a quality nucleus back for this season, the Hornets can possibly reach those heights again, or further. Leading the way is quarterback and league MVP Alex Carucci. The Hornets also have returning league all-stars in OT/MLB Sam Morelli, OT/DL Anthony Pino, WR/S Craig Rubino, and RB Will Batten. Coach Ed Blum is also looking for contributions from OG/DL Owen Delano, K/OLB/WR Matt Guidebeck, OL/DL Teddy Suny, WR/DB Ryan McGuire, and others. The Hornets open with nonleague games against Northeast and Greater Lawrence before jumping into Cape Ann League play against Pentucket.

One of the perennial powers out of the South Coast Conference is Old Rochester. This is a program that consistently runs the ball well out of the I. The Bulldogs made it to the Div. 6 state title game in 2018, where it lost to Stoneham, 26-20. Now, Old Rochester competes in D5 and should be one of the favorites in that bracket. It is the clear-cut team to beat in the SCC. Last year, the Bulldogs notched some good wins on its way to a 7-3 year. The only losses were to Dartmouth, Fairhaven, and Pentucket. This year, the Bulldogs return eight starters on each side of the ball. Leading the way are QB Noah Sommers, FB/LB Jacksen Martin, RB/LB Walter Rosher, OL/DL Brendan Hubbard, and WR/CB Landon Maxwell. There are some interesting nonleague games with Dartmouth, KIPP, and Dennis-Yarmouth.

In 2019, Plymouth South made it to the Div. 4 state title game, where it lost to Melrose. Expectations are high again for the Panthers, who this season have a team with a chance to make another deep playoff run. Last year, Plymouth South had a strong team that went 8-3, including wins over Hanover, Stoughton, and North Quincy. The losses were to Scituate, Foxboro, and Westfield. Once again, much of the optimism centers around junior running back Casious Johnson, who is a returning All-State performer. Joining him on the Panthers this fall is his younger brother, freshman RB/CB Gio Lynch. There is a solid skill group returning in WR Jamie Andrews, WR/CB Liam Davis, CB/S Declan Davis, and QB Cole Brunstrom. Offensive lineman Harry Ottino (6-4, 255) and three-year starter at LB Jackson Elliott also return.

Rockland has.a proud tradition and added to it last season with a Div. 6 state title. The Bulldogs beat Abington at GIllette Stadium, 23-13. It was the second time Rockland defeated a very strong Green Wave team in 2021. The only losses for this team last year were to Middleboro and East Bridgewater en route to a 10-2 mark. Once again, Rockland promises to have the type of team that can make a deep playoff run. The Bulldogs should be solid on both sides of the ball, and have experience in the right places. Leading the way again is RB/DB Lucas Leander. Leander had a terrific 2021 and is a valuable runner and receiver. QB Michael Moriarty returns, as does RB/S Jake Wilson, and WR/CB Gavin Wardwell. The Bulldogs open the season with games against Hingham, Silver Lake, and Whitman-Hanson before South Shore League Sullivan Division play starts.

Going back to 2018, Scituate has won two Div. 4 state titles, and established itself as one of the premier programs both in the South Shore and the state. The Sailors always feature a balanced offense and strong defense. Although this team has to replace a lot of key pieces on both sides of the ball, the Sailors should still be formidable. Leading the way for Scituate this fall are their four captains. Danny Thompson is a returning two-way starter on both lines at 6-5, 295. Also a two-way starter at TE/DE is 6-3, 225-pounder Jamieson Hodlin. Returning defensive starter Colin Morley at 5-10, 200 will move from outside to inside linebacker. Will Chatteron, a returning starter who played CB last year, will move all over the field on offense. Senior Shane Johnston transferred back to Scituate from St. Paul’s (NH) and will make an impact on the lines at 6-5, 275.

There have been few programs around the state that have been on as much of a roll as Swampscott. The Big Blue won Div. 5 state titles both in 2019 and 2021. Coach Bobby Serino has his program competing well with everyone on the schedule. Last year, the Big Blue posted quality wins over Masconomet, North Reading, Beverly, Bishop Fenwick, Danvers, and Peabody. The only loss was to D3 state champion Marblehead on Thanksgiving. The Big Blue lost a lot of production to graduation, but return WR Elijah Burns, CB/WR Jason Codispodi, CB/WR Chris Ferragamo, and G/LB Ethan Gee. The nonleague schedule again is challenging with Auburn, Lynn English, Bishop Fenwick, Saugus, and Northeast.