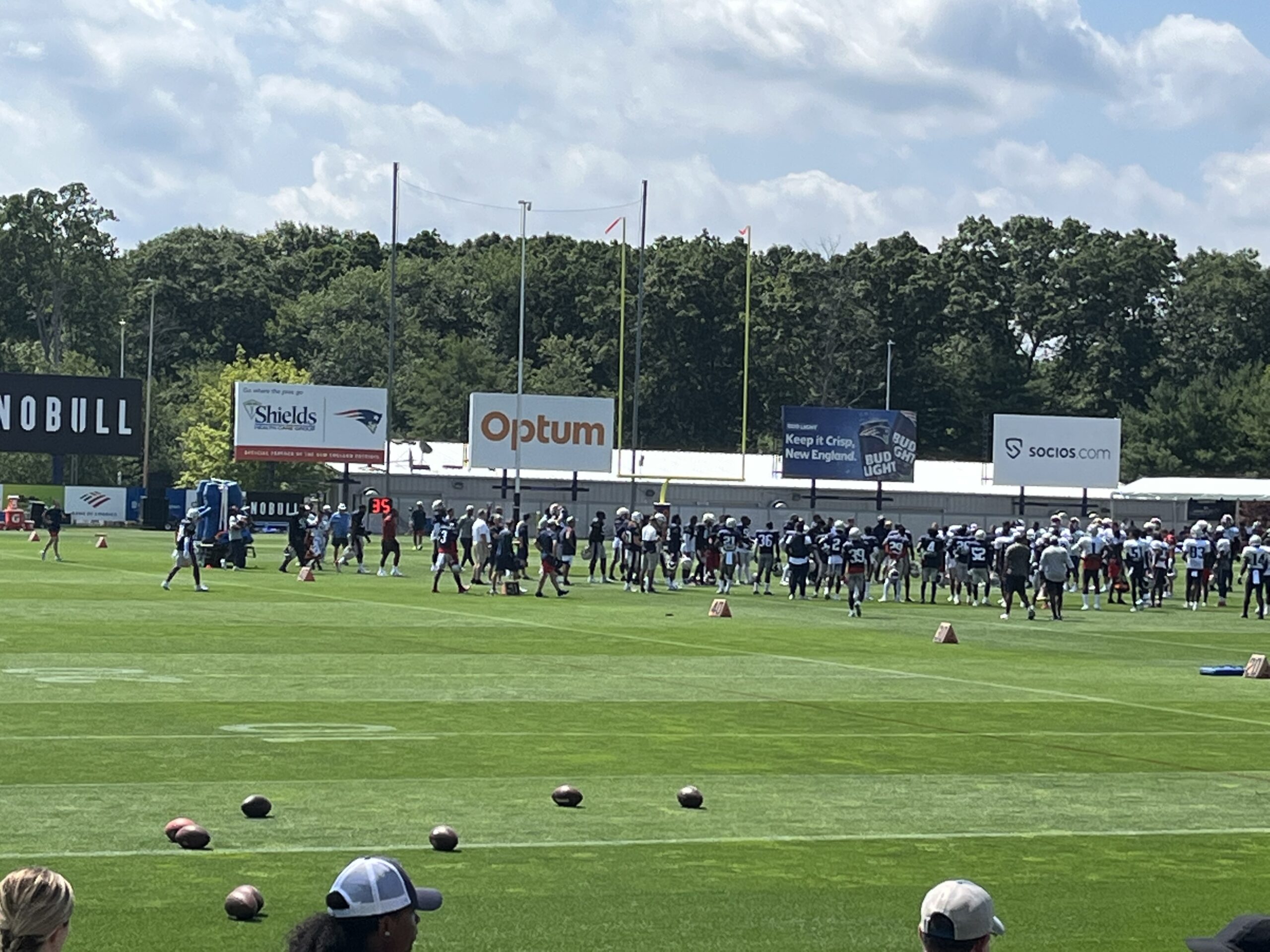 Day two of padded practices was another good one for the defense, a struggle for the running game and while there were some more flashy catches from a few receivers, an inconsistent day for the offense yet again.

-Terrance Mitchell made it six-for-six as the first guy out for practice.

-Lonnie Paxton was on hand in the family/VIP area. He might be the only field goal/long snapper in NFL history who will always be remembered by a fan base.

-Speaking of the fan base, Tuesday’s crowd was the smallest of training camp by far. Most of the bleachers were full by the first few periods of practice, but it took a while and also cleared out substantially before practice ended. Not much energy either.

-During early positional drills, Kendrick Bourne had to drop down and do pushups, I didn’t see why, but I’d assume a drop. Towards the end of the pushups, Jakobi Meyers playfully pushed down on Bourne’s back as he tried to rise up and the two shared a laugh after. Meyers added a nice toe-tap sideline catch in the same drill.

-At 10:00 competition started with 1-on-1’s. Jakobi Meyers burnt Myles Bryant at the line before hauling in a catch on a quick slant. Mitchell had a nice pass-break up on a similar route, Ty Montgomery continues to impress and had a nice grab against Mitchell a few snaps later.

-The two best plays of the day came on back-to-back reps in the same drill. First, rookie Tyquan Thornton made a ridiculous diving catch against Jalen Mills, then, Nelson Agholor went up for a one-handed, Odell Beckham Jr.-esque grab over Joejuan Williams just before the horn blew for the next period.

-Initial 7-on-7 work was very light from 10:13-10:18 before the first 11-on-11’s started. Tyquan Thornton was more involved than he has been throughout the first five practices. Montgomery seems destined to make the team at this point too, he just does everything well. He can run and catch in a number of different situations.

-For the first time (maybe ever) Damien Harris actually stopped a run short today after a great cut during the 11-on-11’s. He continues to bring fantastic energy every day.

-Back to 11-on-11 work from 10:37-10:48. Thornton had another nice catch, this time with a pretty grab on the sideline, keeping his feet in bounds on a ball from Bailey Zappe. Ronnie Perkins, Bill Murray and Anfernee Jennings all had to run a lap during the other set of 11-on-11 work being done on the other field.

-Mac seemed frustrated throughout the morning and the offense really only had a few dump offs or quick throws over the middle at its disposable during this particular period. The one highlight during this point was a deep ball from Mac to DeVante Parker down the right sideline over Justin Bethel.

-Ball security is job security, and there was a bit of time spent on it. I’m sure it may have happened more than I saw it, but the only lap I saw taken was from Agholor after he had the ball punched out by Shaun Wade.

-In what I have to think was a unicorn type situation, Mac and Steve Belichick shared a chat near the sideline while there was some brief field goal work taking place on the main field. Would love to know what that conversation sounded like.

-Back to 11-on-11 at 10:54 and the defense dominated. On the very first snap Henry Anderson batted down a Mac throw. On one particular run play, Raekwon McMillan was in the backfield seemingly just as Damien Harris received a hand off. Mac earned a big roar when he was flushed out and took off for a decent chunk-play run, but it was only because Ja’Whaun Bentley was in his face quickly. Christian Barmore – who remains in permeant beast mode – and Jennings also blew up a run in the backfield.

-The second team received either 12 or 13 straight reps towards the end of the period, an odd choice given how much the offense is struggling to find consistency.

-At 11:11 Aerosmith started cranking as the team switched over to Red Zone work. On the first snap Lawrence Guy ended up blowing past Isaiah Wynn to disrupt, forcing Mac to show off his ability to move in the pocket again. Matt Judon would have had a sack on Jones during the period as well.

-For a brief second, Tre Nixon looked like Danny Amendola to me when he caught a quick out from Zappe and jetted towards the end zone.

-Mac and Agholor hooked up for a lucky play over the middle as the ball sort of fluttered towards Agholor thanks to pressure and a would-be sack from LaBryan Ray.

-Mack Wilson made his first (at least that I’ve seen) big play when he smoked J.J. Taylor in the backfield during the same RZ period.

The offensive line has struggled to block in the running game and the receivers have really only been able to make big plays in 7-on-7 work or in drills. The inconsistent play offensively during the 11-on-11 periods is worrisome, but it’s far too early to say this offense can’t score points. I still think it’s an underrated unit that clearly has some talent, but they need to start showing it against (on paper) an average defense, especially with preseason game No. 1 a week away.

Practice No. 7 is once again open to the public on Wednesday starting at 9:30 with gates opening at 8:30. As always, continue to check out nefootballjournal.com for all things New England Football.