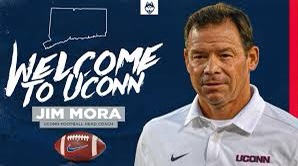 The UConn Huskies kick off the Jim Mora era today as they open training camp. UConn’s season opener is less than a month away on August 27th when the Huskies travel to Utah State.

There are plenty of areas to evaluate in this camp. Here are three areas I will be focusing on when following the Huskies in camp.

1. Quarterback competition: Mora and his staff remade the quarterback room. In are Penn State transfer Taquan Roberson, Northern Arizona transfer Cale Millen. Out are Jack Zergiotis and Steven Krajewski. Roberson and Millen will compete with the only returning quarterback on the roster, Tyler Phommachanh. Incoming three star recruit Zion Turner may also factor in the mix.

New offensive coordinator Nick Charlton will run an uptempo, multiple offense. He wants to run the quarterback so Roberson would be the favorite but based on what we saw in spring ball, this competition is wide open.

2. New wrinkles on defense: Mora retained old friend and former assistant Lou Spanos so the Huskies will once again be a base 40 front. I would also expect some more wrinkles however. Expect more 30 fronts in nickel and dime situations and more pressure. The Huskies have a strong front seven so expect Mora and Spanos to play to their strengths and move a lot. The defense was abysmal last season. They must improve if this team is going to compete.

3. Culture change: If spring ball was any indication, the culture at UConn is changing. Mora is running a tight ship and expectations are high. He wants to win now. Camp will be tough and it will change a team that quite frankly needs to be pushed.