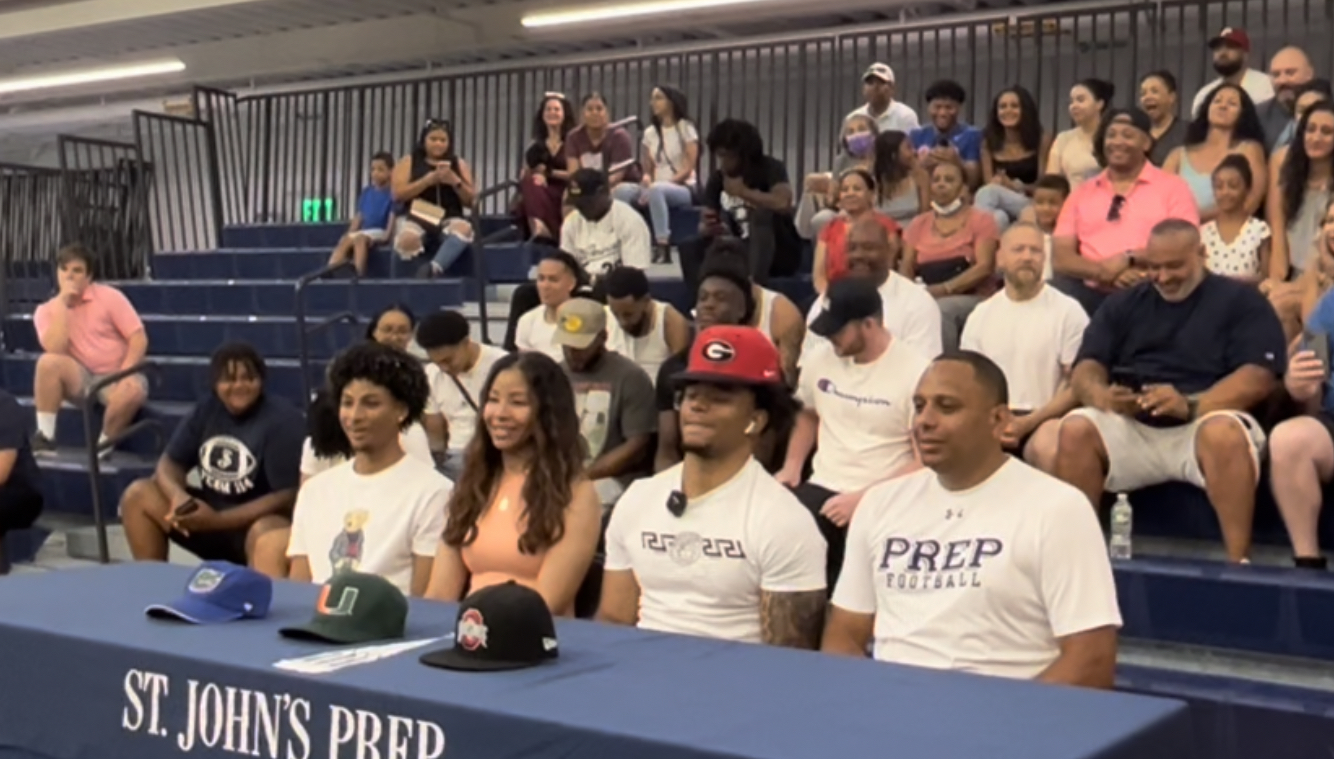 Keeping a secret can be hard sometimes, but keeping the same secret for a month and making sure your family does too? That’s excruciating.

On Saturday afternoon with a national audience on a CBS Sports livestream watching and his teammates, family and friends sitting in the bleachers behind him inside St. John’s Prep’s beautiful field house, star safety Joenel Aguero finally got to reveal the decision he had known he was making for a month.

With his brother Joel Jr. sitting on his far right, his mom Angela to his immediate right and his father Joel on his left, Aguero had hats from Florida, Miami, Ohio State and Georgia lined up on a table with a blue SJP cloth draped over it in front of him. When the moment of truth finally came, Aguero grabbed the red Georgia hat and proudly put it on his head as those closest to him cheered.

“I made up my mind, I’d say probably a month ago,” he told the media during a scrum following the announcement. “I made it like a month ago, but like I said, I didn’t want to limit my options…I kind of did keep it a big secret between me and the family. They knew what I was going to pick, it was a family decision.”

Prior to making the announcement, Aguero turned and faced everyone that came out to show some love. When he began thanking his parents he became quite emotional, but eventually got through it.

“I know he worked hard and had to get up early in the morning, but he’ll still come to the field every single day,” Aguero said of his dad while choking back tears. “Lastly, I’d like to thank the woman of the house, my queen, my everything, my mom. Without her, I would really not be in this position. She’s my mentor for real, she gives me the best advice that she could ever give me…we get into it a lot but I love my momma.

“I wake up every day with a purpose and I’m going to take care of her and all my family. I just want to keep grinding and keep shining.”

Knowing you’re good enough to play Division 1 football at an elite school is quite a stressful proposition for some kids. Aguero acknowledged there were moments where it was hard to wrap his mind around the fact that he was now one of those big time recruits with all sorts of attention.

“It was a lot, to be honest,” he admitted. “This was always a dream of mine, so I kind of just had to wrap my head around it and be like ‘listen, you’ve prepared for this your whole life, you worked for this, it was going to come.’ I prayed with my family, I prayed to god and then the moment came true.”

There was also a familiar connection that Aguero relied on. New Minnesota Vikings draftee and former Everett star Lewis Cine was a Bulldog and went through the same process as Aguero.

“He really helped me,” Aguero said of Cine. “He told me his story and how the University of Georgia helped him be a first round safety. So, I’m trying to follow in the same footsteps, but even be better though.”

Now that the stressful process is over, Aguero can focus on trying to get the Eagles back to Gillette for one more crack at the Division 1 Super Bowl.

“Yeah, I feel like I can definitely enjoy it,” he said. “Now I can help my team win a state championship, which we will.”

Days like Saturday are all the proof anyone needs that Massachusetts and New England high school recruiting is drawing the most attention it ever has because of guys like Cine, Aguero and so many others. As a member of arguably the best team in the SEC, Aguero plans on showing what football in these parts is all about while striving to reach the NFL.

“They better stop sleeping on us because we’re on the come up,” Aguero added sternly. “They used to doubt us all the time and be like ‘Massachusetts ain’t got no football,’ but that’s why I’m here. I’m putting my whole state on the map and I’m going to keep putting on and just show (SEC fans) that we’ve got ballers too, just like everybody else.”