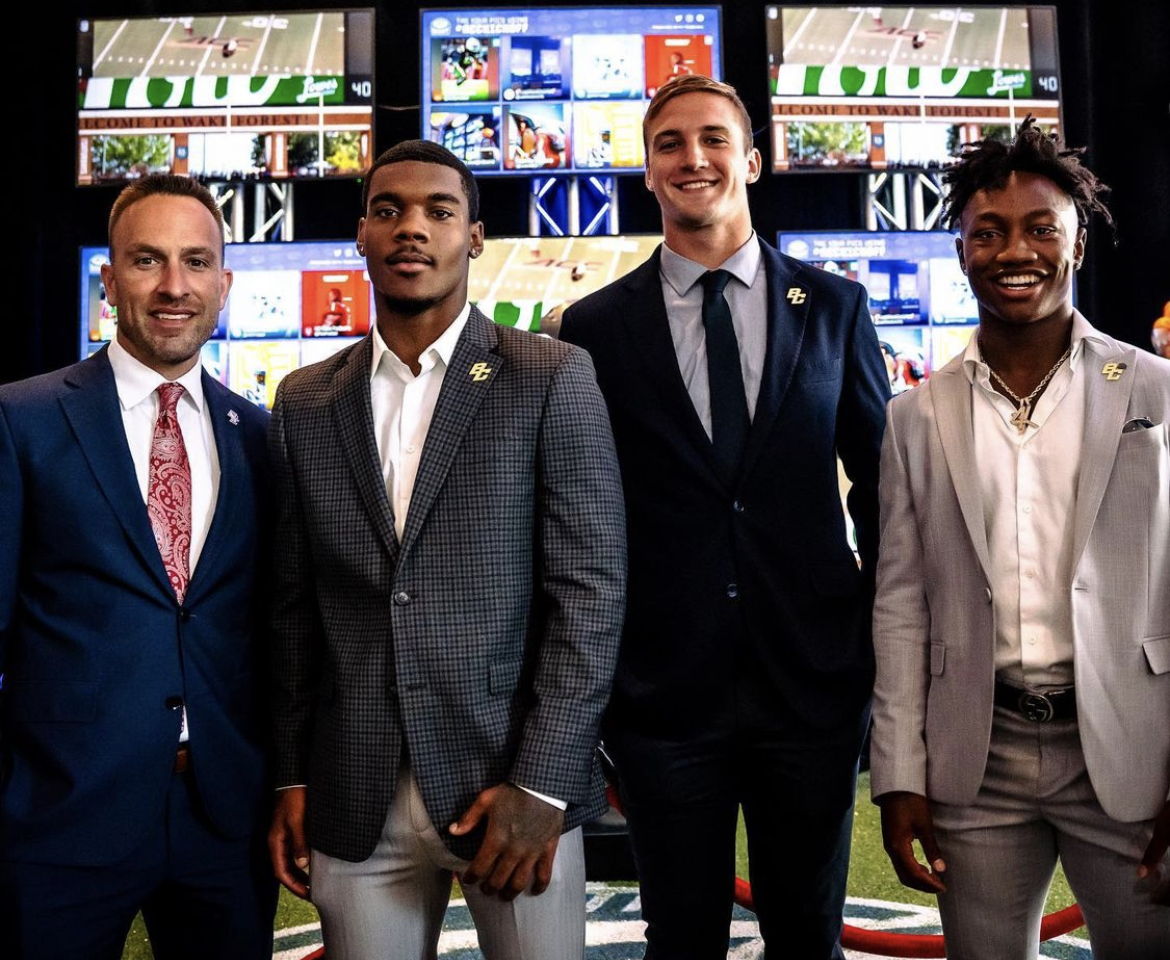 The BC football season still doesn’t start for just over a month officially, but Wednesday provided Eagles fans with a fix they were craving ahead of camp starting.

The ACC and ACC Network kicked off its two days of media coverage and season previews down in North Carolina Wednesday with Atlantic Division players and coaches representing each school. The Coastal Division will go through the media “car wash” on Thursday. Speaking on behalf of BC was head coach Jeff Hafley, quarterback Phil Jurkovec , wide receiver Zay Flowers and defensive back Josh DeBerry.

There was quite a bit to sift through and some really good stuff from all the guys, so here’s everything that stood out from those press conferences:

COACH HAFLEY ON THE OFFENSE AND NEW OC JOHN McNULTY

“John and I were together when I was with the Bucs. John was the quarterback coach, I was the DB coach. I know what type of person he is, what type of man he is, and that’s really important to me.

I’ve also coached against him when I was at Pitt, and he was in the Big East at the same time. What was important for me is what I have learned as a head coach is I have a vision of what I want the offense to look like. I feel like in my first two years, to be very honest with you, I focused too much on the defense. I think I failed as a head coach to make sure that my vision on what I want the offense to look like stays that way.

I interviewed a lot of guys, and John’s vision and my vision, they really matched up. Without getting into too much detail of what it’s going to look like, there will be some similarities of what we did in the past, but then we have to find out what guys like this can do very well, and we have to get guys like Zay the ball.

I’m really excited about John being here and seeing where we can take the offense. Again, do I think we played well enough on offense last year? We don’t. That’s my fault. I need to do a better job as head coach and making sure my vision stays intact throughout the year.”

“Phil played one game healthy, one, against Colgate. He didn’t have to do too much. No disrespect to Colgate, but the game got out of hand, and we didn’t throw it around like we were throwing it 50 times a game like his first year when we lit it up. Phil goes down with a freak hand injury, falling on the sideline in Week 2, and I was told Phil was out for the year. Everybody understands what type of person he is, what type of quarterback he is.

He got cleared by the doctor to play physically. Now, that didn’t mean he was ready to play. I was told he had 50% grip strength in his throwing hand, and we’re getting ready to play a night game on a short week against Virginia Tech, and he comes in my office and he tells me he wants to play.

That says a lot about Phil because there’s a lot of guys that, one, wouldn’t want that tape to get out. Right? He is this hyped-up guy, can barely grip a ball and throw it down the field. Two, he hasn’t practiced. He comes back, and he puts the team before himself with 50% grip strength, barely practicing. We beat Virginia Tech in our Red Bandana game, and then Georgia Tech, and he had 500 yards by himself and five touchdowns.

Then he gets beat up in our Florida State. Not a little bit. We didn’t protect him very well. Then he has the flu going into the Wake Forest game. Doesn’t practice but still plays.

If I’m an NFL GM or coach and have been in those meetings, that tells you everything you need to know about Phil. You can turn on the tape and watch him play, but kids aren’t built like that anymore. He is tough. He cares about his team. When he gets out on the field, there’s nothing that phases him.”

“Zay, everybody saw the story of Zay. Zay is another story of what’s right in college football right now. Everybody wants to talk about all these things that are wrong: NIL, transfer portal, conference realignment. We need good stories, stories like Phil, like I just told you. Stories like Zay who had the opportunity to go get a ton of money to leave, as he is getting phone calls from other schools, but instead calls me and decides to stay because he cares about his team, because he cares about a real degree and because he wants to finish what he started.

We need to get this guy the ball more. I told him, he is not going to be able to go out after games this year he is going to be so damn tired. He is going to catch punts and return punts and touch the ball over and over again. That’s my job as a head coach.

I get passionate when I talk about those two guys because they are different, and there’s not enough of that right now in college football.”

JURKOVEC ON BEING INJURED LAST YEAR & HIS RECOVERY

“This offseason has been great. I’m fully healthy, so I’m all good to go, but it was a little bit tough there last season at the end. Coach touched on it. Not being fully healthy and trying to grit my way through it.

I think I learned a lot during that time, and I tried to make the most of it, but overcoming that adversity has strengthened me.”

JURKOVEC ON HIS CONFIDENCE IN THE YOUNG OFFENSIVE LINE

“I’m fully confident in them. It’s not ideal, but they’ve got a legacy to carry. They understand the great O-line play that has come from BC, and they were all recruited to play here.

So these guys are ready. I think they’re all ready to step up, and I’m excited for them. It will be fun bringing along these new offensive linemen showing them the ins and outed of the game, like, when we’re actually on the field playing. I’m really excited, and I hope that we have a great camp.”

“Passionate. Passionate about the game. I think he understands what it takes to make it as a college football coach. He has put in the work through years. I know because being from Pittsburgh, he lived at someone’s house. What would you call it? Like a bar almost, as a GA. He really grinded his way up. He loves this game. He loves everything right about the game. Coach Hafley has been the best. That’s infectious. His love for the game.”

“Definitely. Excited for that one. I haven’t been back since the transfer, so that’s going to be a special one.”

FLOWERS ON HIS DECISION TO RETURN

I just felt like I owed it to the program to come back and try to give the program something that we didn’t have in a long time.”

FLOWERS ON WHAT HE WANTS FANS TO REMEMBER AFTER HIS CAREER

“That I was a BC man. I was loyal to the program, and I did everything I could to help the program prevail and reach a spot that it couldn’t back when it was hard.”

DeBERRY ON THE LACK OF CHATTER SURROUNDING THE DEFENSE NATIONALLY

“It’s very competitive in terms of our workouts with the offense versus the defense. We’re used to not getting a lot of the shine, as defense tends not to in football. We’ve used that as nothing but fuel. We’re looking to be the best defense in the conference in the country this year in terms of every aspect, not just passing defense. We’re looking to be the best in sacks and all that other stuff. We’ve been using that as fuel. We have a lot of guys coming in, leadership stepping up. We’re using that as fuel and looking to go straight up from there.”

DeBERRY ON THE BIGGEST DIFFERENCE BETWEEN HIS FRESHMAN YEAR AND NOW

“The biggest thing I’ve been working on is my leadership. Being more of a vocal leader in terms of not just being the guy that people look at as being the guy that can get on somebody, that can lock somebody up, doing it both on and off the field in terms of workouts and camp and then leading up to the season. I Just mainly working on my leadership and feel like I grew a lot in that aspect from freshman year.”

DeBERRY ON THE DEFENSE IMPROVING ITS PASS RUSH

“We definitely are more in terms of looking at the D-line and their leadership. You got guys like Marcus Valdez. He has been there a long time. He stepped up as a leader. You have guys like Shitta Sillah and guys like “Booze” coming back. We have a lot of firepower coming back. They’ve used that as nothing but fuel. They want to get it more than anybody else. We definitely use that as fuel. That’s been good for us this year.”

“I feel like Coach Haf defines what we are. He is a great leader on and off the field. That helps us be better, and it helps guys buy in. You have Phil and Zay coming back for another year even though they don’t have to. That’s the type of team we have. That’s what type of head coach we have. That’s Coach Haf for you. We’re bought in. I’m bought in, and I’m bought into everything he has to offer. That just shows how great of a coach and leader he is.”