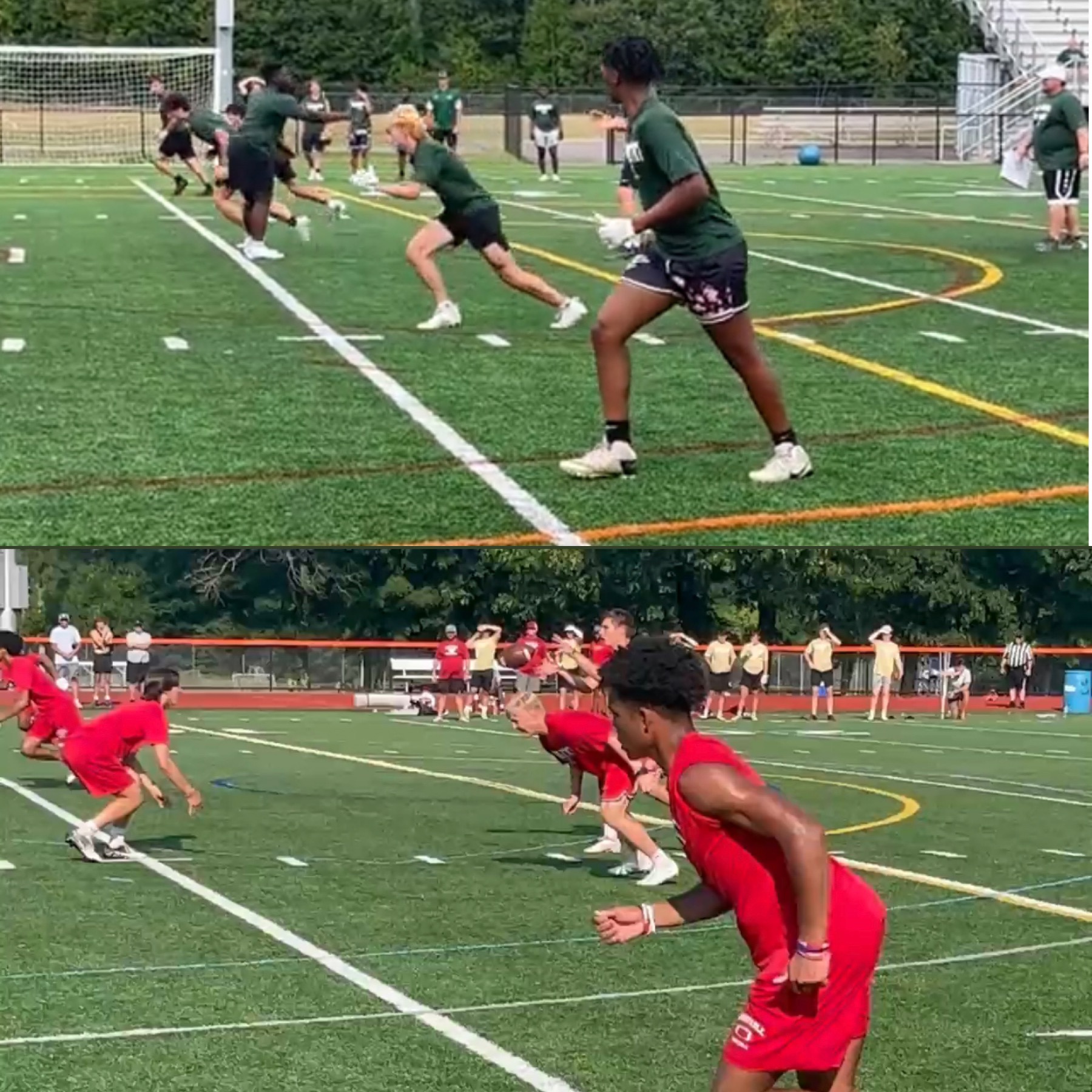 Over the weekend, we took in a heaping helping of 7-on-7 at the Northeast 7v7 North and South regionals. Milton coach Steve Dembowski does a phenomenal job running the tournament, and the event was a success again.

On Saturday, it took place at Exeter High School in New Hampshire, while Sunday was at Oliver Ames. The only blip was for about an hour when it poured down rain on Sunday. Some teams left, but enough stayed to have a great playoff.

What we did on both days was talk to as many people from each school to try to get info on teams for the fall. We are going to use this article to share that information with you.

If your team did not get mentioned, feel free to reach out via email to kurkjianadam@gmail.com.

We talked with over 65 teams. Here is that info.

— Milton had a fantastic weekend. The Wildcats made it to the North Small final before losing to Billerica Saturday, then won the South regional Large division championship on Sunday. Senior quarterback Owen McHugh threw the ball well on both days. The Wildcats have their top four receivers back in seniors Mike Fulton, Dillon McKenzie, Mike Salmon, and Shane Olsen. Senior captain and LB KJ Beckett also returns, and junior WR Zack Stowell played well on Sunday.

— BB&N won the North regional Large or Open Division. The Knights are always in the mix for an ISL title and will be again this fall. Senior WR/S/OLB Ronan Hanafin had a tremendous Saturday and would be in the running for overall MVP of the event had there been such a thing. Barnstable transfer quarterback Henry Machnik will lead the Knights this fall. Other players who will contribute this fall are senior WR/DB Isaiah Kacyvenski, junior TE Brett Elliott, senior LB Leo Sarzana, sophomore running back Bo MacCormack, junior LB Jack Kelly.

— Barnstable had one of the best collection of athletes on either day, as the Red Raiders made it to Sunday’s Large final where they lost to Milton. The player to remember here is sophomore WR/S Chevy Shakespeare. He already has a URI offer, and was a touchdown machine on Sunday. Barnstable in recent years has been a run-heavy team, but will open things up this year. Other top performers for Barnstable included junior RB/WR/S Tajardo France, senior WR/DB JJ Martin, senior QB Jake Mooney, and senior RB Mark Wiseman.

— Dedham made a surprise run and won the South’s Small division title with a 6-0 win over Rockland in the final. The Marauders will be junior heavy this fall, but talented. Juniors to watch here are QB Joe Goffredo, RB/S Gianni Gasbarro, LB/RB Will Fitzgerald, and WR/S Eyram Kplorfia. Sophomore RB/DB AJ Pinet is another player to keep an eye on.

— Westford Academy had a great day Saturday, making it to the Large division final before losing to BB&N. Senior running back Anthony Rudiman is a 1,500-yard rusher and should have another big season. Senior LB Drew Wilson, senior WR Matt Hagan, senior WR Luke Frenault, and sophomore WR/S Alex Wilson should all have big years for the Grey Ghosts.

— Bonny Eagle of Maine had a terrific run to the knockout stage. Seniors led the way for the Scots. This year, they will be led by QB Cam Marcello, WR Hayden Campbell, WR Caden Nixon, RB Trevor Perkins, OL Nick Ryker, and OL Brody Ernst.

— The Brooks School out of the ISL had a strong Saturday, making it to the semifinals of the Large or Open Division before losing to BB&N, which Brooks beat earlier in the day. The premier player for that team was senior WR/TE/DE/LB Jackson Conners-McCarthy, who is a Buffalo commit. Senior QB Mike Wolfendale, junior RB/LB Joel Moreles, senior LB/WR Marcos Montiel, senior CB/WR Rayden Waweru, and senior WR/S Nomar Tejeda will lead this team in the fall.

— Rockland is coming off a D6 state title, and the Bulldogs have the opportunity to make it back with a strong nucleus this fall. Rockland has a strong senior group in RB/DB Lucas Leander, QB Michael Moriarty, RB/S Jake Wilson, and WR/CB Gavin Wardwell.

— Duxbury made it to the Div. 4 state title game last year, and has the firepower to get back. It all starts with quarterback Matt Festa, who was on target on Sunday. Other Dragon standouts include senior WR Cullen Quinlan, senior S Brendan Bonner, junior LB/WR Alex Barlow, and junior LB Finn Carley.

— Plymouth South made some strides last year and looks to continue the good times behind junior RB Casious Johnson, one of the top backs in the state. The Panthers will also have senior contributors in WR James Andrews, WR/CB Liam Davis, CB/S Declan Davis, and QB Cole Brunstrom.

— Thornton Academy of Maine went 11-0 last year and won the Class A state title. This team is always in the running up there, and should be good again. Leading the way this fall will be senior WR/CB Henry Lousier, senior LB Tommy Johnson, senior RB/DB Hayden Whitney, junior QB/S Caden True, senior QB/S Ryan O’Keefe, and senior LB Harry Bruce.

— Natick again looks to be strong out of the Bay State Conference. The Redhawks have two quarterbacks who can play in sophomore Damon Taylor and junior Drew George. Other players to watch are junior RB/LB Ted Ferrucci, senior WR/CB Drew Waldron, senior LB Henry O’Connor, and senior TE/DE Jack McCarthy.

— Marshwood of Maine won the Class B state title last year, but will be young and replacing a lot of talent this fall. Senior WR/DB Emmanuel Poe and junior TE/LB Riley Parnham will lead this team.

— Middleboro had a good year in 2021 and will be back at it this season behind seniors Jacob Briggs (QB), Nate Tullish (RB), and Harry Fuller (OL).

— Wellesley only had seven seniors on last year’s roster, so the Raiders return an experienced and talented team. Senior brothers Xavier Ferrara, a TE/LB, and Vince Ferrara, a QB, will combine with senior S/WR Tyler Yen to lead the Raiders.

— Keep an eye on Foxboro. The Warriors lost a lot to graduation, but will just reload. The junior class is strong with WR/CB Tony Sulham, LB/RB Lincoln Moore, and DE/TE Brandon Mazenkas O’Grady. Senior WR/S Payton Francis will also contribute.

— Concord of New Hampshire had some bright spots on Saturday. This team will be led by seniors DB/WR Divon Duncan, QB Zack Doward, TE/DL Austin Wells, and WR/DB Matt O’Rourke.

— Haverhill will be young with a mostly sophomore team. Senior S/WR/RB Adrian Sarrette will lead the way for the Hillies.

— Triton made a nice run Saturday and will be led this year by senior QB Max Ciaramataro, senior OL/DL Ashton Wonson, and junior WR/S Cole Piaseczynski.

— Another team to watch out for is Apponequet. Seniors lead the way for Lakers in QB/DB Harry Lemieux, RB/LB Jackson Gagnier, and TE/DE Ethan Brown.

— Attleboro had a strong day Sunday and will build in the Hockomock League behind seniors Anthony Salvianti (WR/DB), Spencer Schertz (S), and Ayden Ramirez (WR/DB).

— Winchester had a good day Saturday and has a big junior group this season.

— Norton brought a lot of players and expects to be very competitive this season.