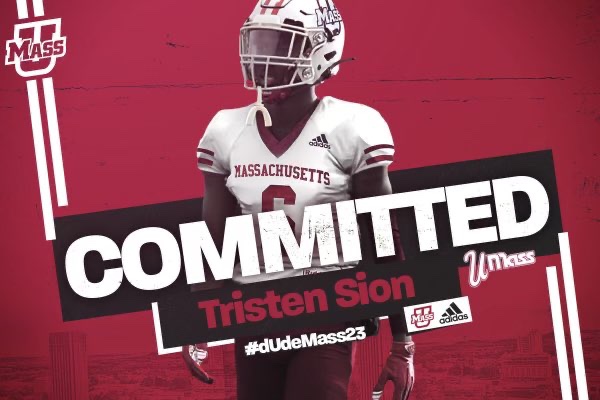 The Don Brown Affect is a real thing. Brown’s presence at UMass is attracting talent from across the country. The latest example is defensive back Tristen Sion from James Rickards High School in Tallahassee, Florida. Sion committed to UMass last night. He is one the highest ranked recruits to ever commit to the program.

Sion had 41 total offers and picked UMass over BC, UConn, Wisconsin, Ole Miss, Mississippi State and Nebraska among others. Sion sited Brown’s success in developing NFL talent as a big reason why he chose UMass.

The 6-1 170 defensive back can play corner or safety in college. He is long, smooth and fluid as an athlete. He plays with good instincts and does a good job of reading routes and breaking on the ball. Sion competes in contested catch situations and consistently makes plays on the ball when he’s one on one.

UMass currently has five commitments for the Class of 2023 but there will be a lot more on the way including Sion’s James Rickards teammate three star wide receiver Rico Watkins who has UMass in his final three list. Like Sion, Watkins would be a tremendous get for the Minutemen.