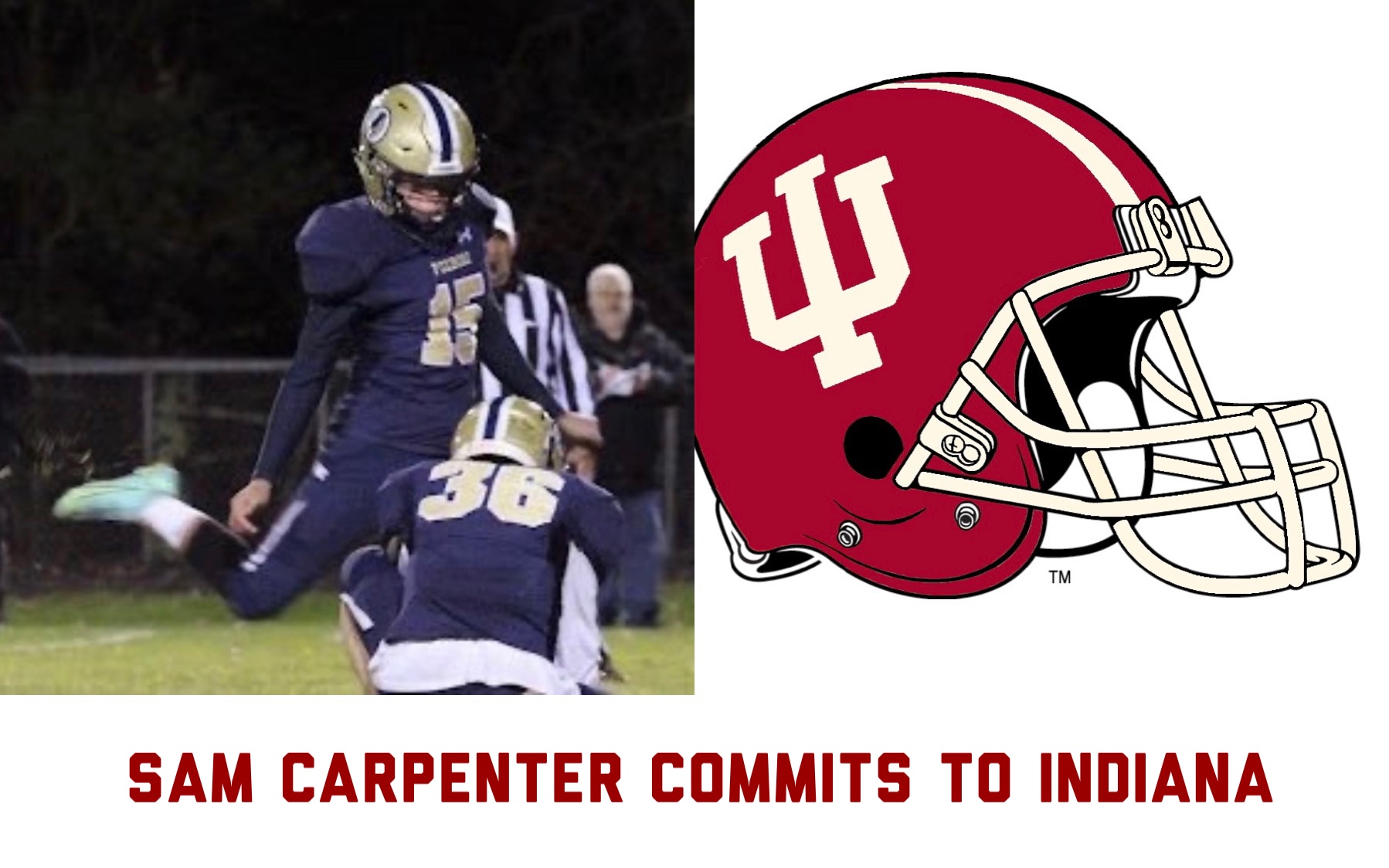 It is not very often you go from being a kid who is trying out football for the first time as a sophomore to a five star recruit two years later. Unless you are Foxboro kicker Sam Carpenter of course.

After two seasons of kicking for the Warriors, Caroenter announced on Thursday that he is committing to Indiana University as a preferred walk on.

If you don’t know Carpenter’s story, it is one of the best football stories in the state in a long time.

When Carpenter first joined the Foxboro High School Football team, he tried to play wide receiver but quickly realized that playing receiver was tougher than he thought. So, he started kicking the football thinking that is a way for him to get on the field.

Foxboro Head Coach Jack Martinelli and his staff quickly realized that they had something special in Carpenter.

Martinelli said that he and the staff knew they had something special.

“The first thing we thought was, he is going to be a big time kicker at the next level.”

Carpenter kicked during the Fall II season and last season. He emerged as one of the top kickers in the state. He went from a soccer player trying out football to a highly sought after recruit.

This spring, Carpenter visited several schools most notably West Virginia, Pitt, Rutgers and Indiana among others. At the Rutgers specialist camp earlier this month, he hit a 56 yard field goal to win a kicking competition.

I’m proud to say I won the specialists camp at Rutgers!!! Here is the 56 yard field goal to win and in the comments of the video is a 74, 4.26 kickoff!!! Thank you to @Coach_KBruno, @CoachEAllen21, and @GregSchiano for today!!! @brendancahill_ @hakuna_mourtada @coachstein48 pic.twitter.com/N7UOx19gs0

Carpenter most recently attended Indiana’s camp. After kicking at the camp and meeting with the coaching staff, he immediately felt that he found the right place.

“Indiana feels like home. I want to study marketing in college and Indiana has one of the best degrees for marketing in the world. Paired with Big Ten football, the coaches, and the love between the program that I haven’t felt anywhere else, made the decision easy.”

As soon as Indiana offered Carpenter a preferred walk on spot, he jumped at the chance and committed.

” I wasn’t planning on committing at any point but after I sat down with Coach Teegardin and I got the offer, I knew I was going to commit soon after.”

The process has been one that hasn’t just involved Sam, but his parents as well. That fact is that lost on him.

“I’m very relieved the process is over, mostly for my parents which always took the time to visit a place if I was interested.”

None of this is lost on Carpenter when he reflects on his incredible journey the past year and a half.

“I am still in disbelief that I got to this point. I only started kicking at the beginning of 2021, so this journey has amazed me with how far I could go. I’ve realized along the way that you will get so much out of something for how much you put into it. That is how I am and will continue with everything in my life.”

It has been quite the journey and in many ways, it is just getting started.