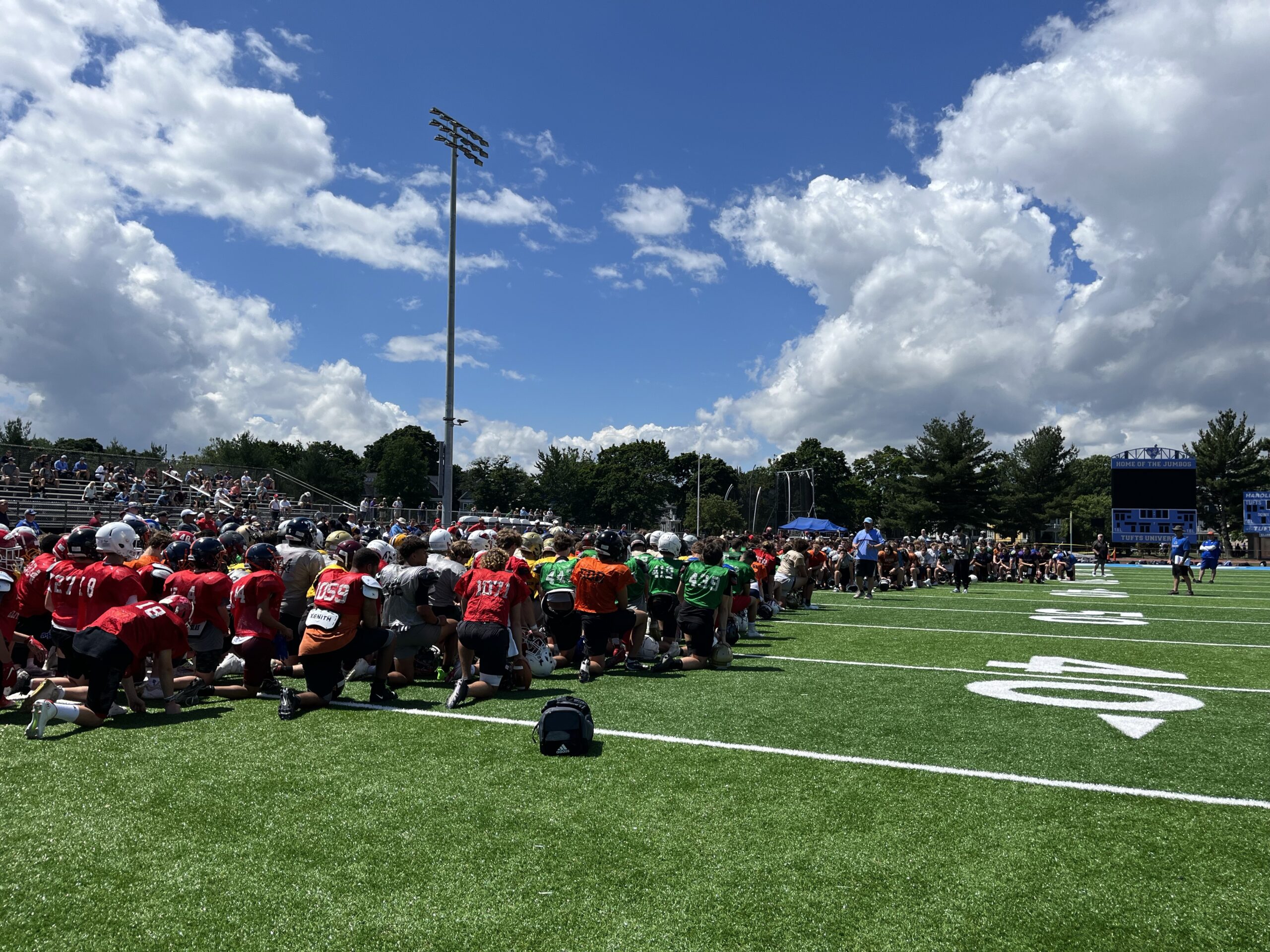 The Tufts campus was buzzing as you pulled into the parking lot at the football field early on Thursday morning.

For the 17th straight year, the Elite New England Football camp was a sellout as players from 37 states, Mexico, Canada and Denmark all flocked to Cambridge for day one of two. The camp – ran by John Pappas, BB&N head coach Mike Willey, Tufts head coach Jay Civetti and many others – has quickly become one of the top summer camps in the country. Dozens upon dozens of head coaches from Division 1, 2 and 3 schools were all on hand to get a look at their next possible diamond in the rough or superstar.

“They’ve done a great job building this to where it is now,” Civetti said. “Coach Pap has been doing this for a number of years, he knows what he’s doing. It’s incredibly well-organized and it’s a great chance for kids to come and compete and not just get better, but get some exposure for scholarships.”

Prior to the start of individual drills around 11 A.M., Pappas addressed the over 800 players on hand.

“What I want you all to do is relax and play,” he said. “You don’t have to worry about a bad time, a bad measurement, any of that stuff. Go back and fix it the next play, we’re going to be here for two days.”

Pappas also talked about how this was a job interview for many guys as coaches are actively looking for players they want on their campus. Pappas explained that it’s not all about what happens inside the white lines either, and coaches would be watching for character guys.

Following Pappas’ speech, Civetti addressed the guys as well and reminded them how important the networking aspect of camps are.

“It’s a pleasure to have all of you guys here,” he told the massive group. “The big thing for me…there are a lot of great coaches here from a lot of different places. Make sure you take the time to go introduce yourself. This is a chance to get better as a football player, yes, but to help advance your lives.”

“This is a great opportunity to get 800-plus kids and now 300 coaches on one of the best college campuses in the Greater Boston area,” he told NEFJ prior to things getting started. “It’s a great day for these kids to learn from some of the best college coaches in the country and a chance to really improve as a player, get recruited and get exposure with some really great coaches.”

After the pleasantries were done, it was time for football. Each position group went off to do some various individual work before one-on-one’s began around noon. Competition was the theme as wide receivers and defensive backs went at it, tight ends and linebackers went at it, linemen went at it and the quarterbacks and running backs all set forth to show what they could do with all eyes on them. Kickers and punters also got work in with eight-on-eight, live action planned for later in the day.

If you need to know just how much the recruiting scene in New England is growing because of camps like this one, just listen to Brian Carroll, offensive coordinator of the Pomoma-Pitzer Sagehens, a Division 3 school in California.

“We’ve been coming out to New England Elite for years,” he said while dodging a WR-DB drill. “We’ve been part of it for 20 years with John Pappas, greatest guy in the world. It really helps our recruiting. We’ve got a lot of kids in the Northeast that love coming out and checking out our campus. Just to be a part of it with Tufts University and coach Civetti, a class guy who does it right, so we’re thrilled to be here.