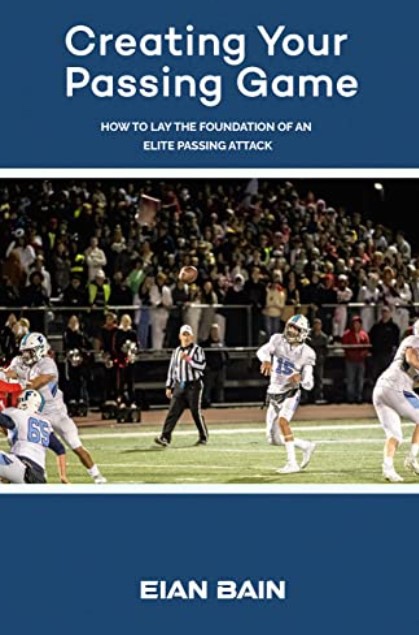 Eian Bain and the Franklin football team have reached some pretty remarkable levels of success under his leadership the last few years, and while eyes have already been on 2023 for a while now, Bain recently decided to dip his toe into the writing pool.

The Panthers’ head coach recently released “Creating Your Passing Game…How To Lay The Foundation For An Elite Passing Attack,” on Amazon, a 97-page book on all things offense.

We spoke with the proud new author on Wednesday, and Bain told us why he decided to do it.

“Basically, I’ve found that at our level, it’s hard to retain coaches year to year. I think our coaches have had a very good experience working in Franklin, but the days of hiring coaches as teachers in the building seem to be less practiced today. For our coaches that work in the private sector, it can be a year-to-year position. I thought maybe other programs might be in the same situation. I’ve made many resources in the past, and wanted to share some of them.”

Bain is hoping this new book is helpful for those that may be looking to get into the game or, those that may already be in the game, but want to take their knowledge to the next level.

“I wanted to make a resource that could help new coaches and/or someone who might want to enter the game of football,” he said. “I hope that it is a good length, offers enough detail without overwhelming someone, and might provide the encouragement to get into coaching. I tried to think of some things that I wish I had known early in my career, and maybe it could be helpful to someone else.”

For those Franklin fans worrying a bit or rivals over at Milford, King Philip and Mansfield salivating at getting a leg-up on the competition, Bain didn’t divulge is entire playbook or anything like that, and by no means does he feel like he’s re-inventing the wheel either. Bain has just taken lessons he’s learned throughout the years and condensed them into one easy read.

“It isn’t exactly our playbook, but everything we do is rooted in the fundamentals talked about in the book,” he said. “Franklin is certainly not the only team using these things, and I did not invent anything in the book. It is all stolen through years of clinics, meetings, and experiences we have had.”

This isn’t just a bunch of football talk in written form. Bain has included images and bullet points throughout for coaches or players that may be more of a visual learner. Football conversations are unique at times, and Bain wanted this to feel more like a couple of guys being dudes than anything else.

“This has text, bullets, and a lot of diagrams.  I wanted to it to read like a conversation, so it won’t make English majors too impressed,” he joked.

Surprisingly, Bain didn’t spend much time putting this together, as most of the content is stuff that’s already been used or jotted down at some point through the years.

“Since most of the material was already prepared at some point, it didn’t take long to put together.  Most of the coaches that have worked for us or coached against us will recognize parts of it and tell you it’s how we do things,”

Bain isn’t just stopping at one either. Having taken the self-publishing route and putting this one on Amazon, Bain is now looking at adding a bit more to the collection.

“I hope by the end of the summer to release a couple more books on various topics, and add to the digital library as the years go on,” he added. “I really enjoy coaching and sharing the game.  I’m by no means a guru or an expert, just a coach who wants to help others.

“Hopefully a few people care to read it and take a few things away from it.”