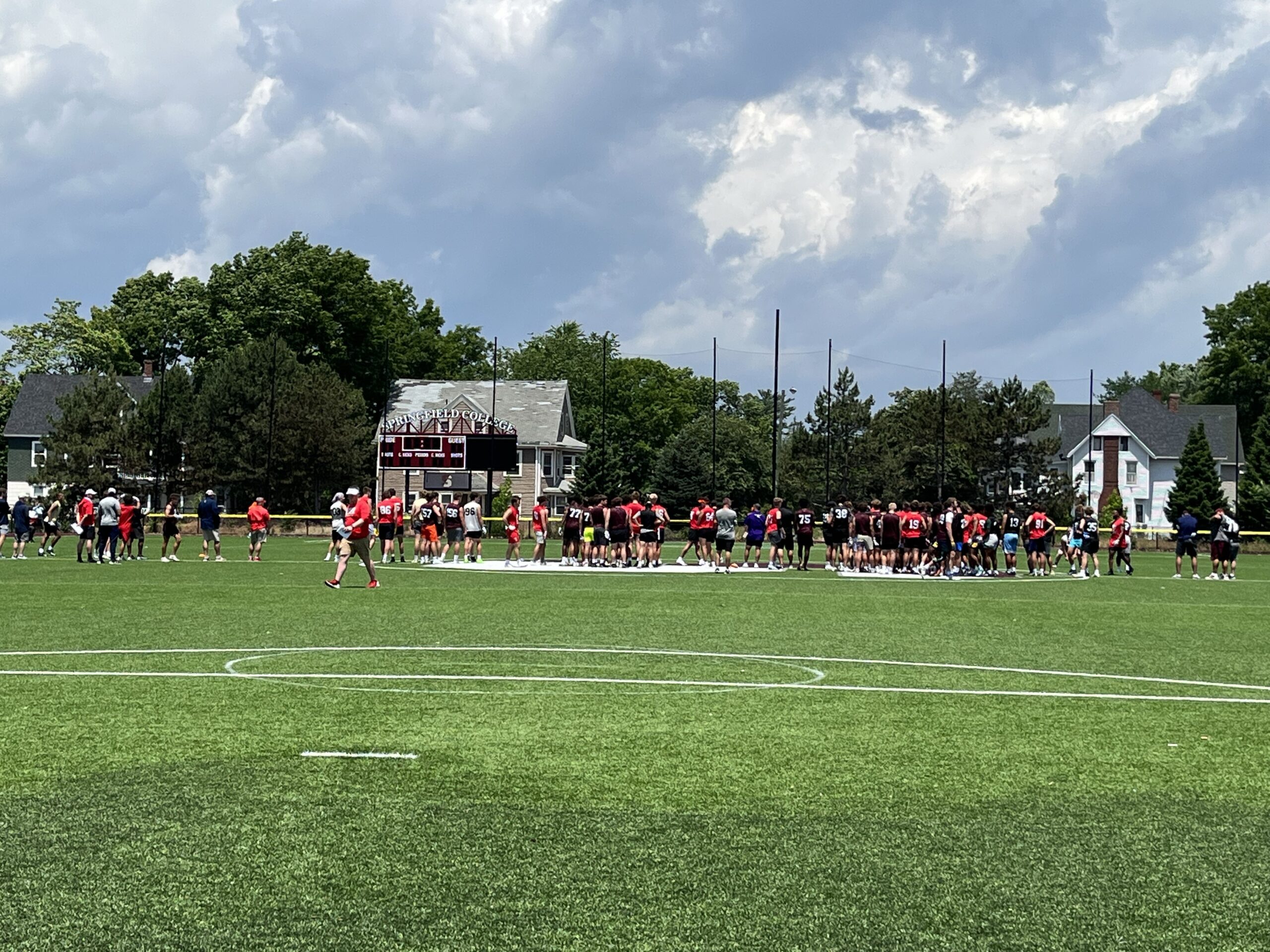 SPRINGFIELD – Anyone who is anyone in the New England college football recruiting world converged at Springfield College early Friday morning for the Best of New England camp and it was another fantastic event.

Steve Martin, the director of B.O.N.E and Excel Sports Academy of New England, along with Springfield head coach Mike Cerasuolo among many others put the camp on across the school’s athletic complex for roughly four hours on what was a sweltering morning and afternoon.

Nearly 1000 prospects and over 100 coaching staffs ranging from UConn, to Navy, to Holy Cross, to Rutgers, to Bryant, to New Haven, to Syracuse and everywhere in between were on hand. Some schools sent their head coaches, some sent the entire staff and some sent a few assistant coaches. Kids had their lives changed possibly forever based on their performance, earning offers on the spot or following the conclusion of final drills.

The only thing missing when members of the media or players signed in was a Frank Costanza “The Place to Be” sign. Springfield College was truly the place to be on Friday for those invested in the development of local players and the growth of the college game in New England.

“This day means a ton to us,” said UMass offensive coordinator Steve Casula. Both he, head coach Don Brown and other members of the Minuteman staff were on hand. “Springfield is kind of our second home. Just right up the road, so really, it means a lot to us. It’s an opportunity to evaluate guys we’ve already been recruiting, it’s an opportunity to watch them in person, to coach them, to visit with them and recruit years out in advance.

“Then, you never know, maybe find some new players. The biggest thing it means to us is we take a lot of pride in New England football and what a great day this is for all of New England football to really show how many good players there are in this part of the country.”

After checking in around 9 A.M. or so, guys did some basic testing (measurable, 40-yard dashes) and then around 10:30 or so drills for individual positions started. Lineman worked over on the baseball fields, the wide receivers, running backs and quarterbacks worked on a couple fields and DB’s and linebackers worked down on the bottom field. Rarely did you see a lull in action, yet everything was organized and professional, truly a joy to watch as kids competed and ultimately tried to fulfill their dreams, especially those that may not get the same attention as some of the other big time recruits on hand.

“For evaluations (the camp) means another opportunity to see kids,” added Rhode Island head coach Jim Fleming. “You’re always fighting through the crowds to find the right guys, but there are a lot of familiar faces that we’ve seen through the course of spring and getting the chance to work them out there today is a great benefit and it’s really cool for New England football.”

As parents, athletes and coaches made their way back to the parking lots following the day, there was an heir of accomplishment and brotherhood that was hard to ignore. New England high school and college football is peaking now more than it ever has. There is excitement around so many different programs that hasn’t always been there and days like Friday only add to that excitement.

This entire community is now hell bent on making sure the kids and schools in this area get the respect they deserve.