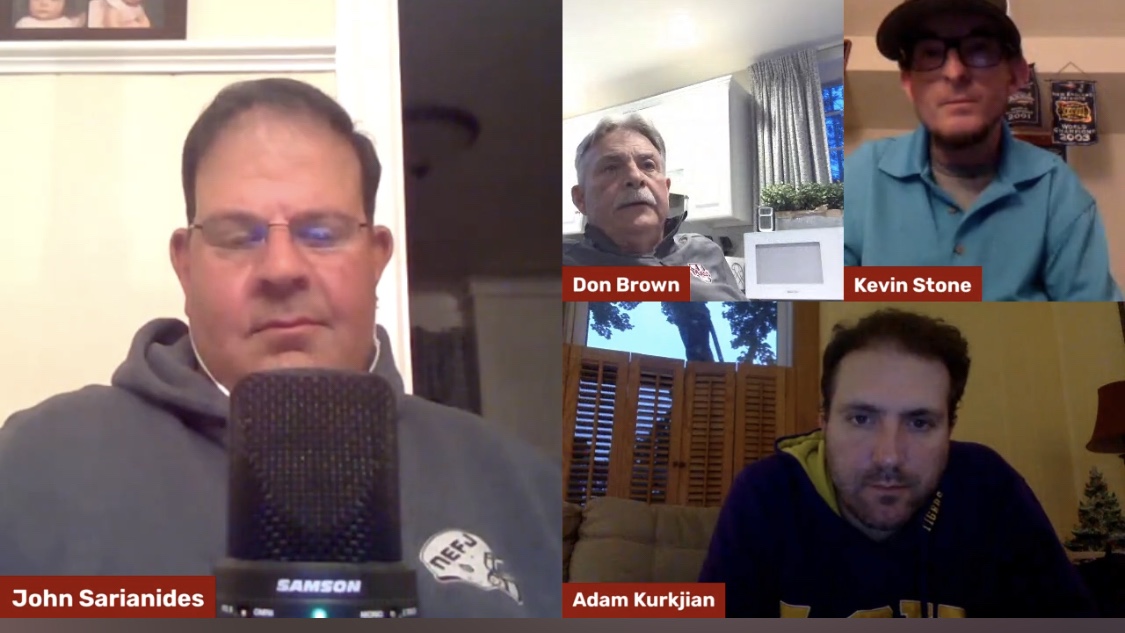 What followed was a wide-ranging discussion that lasted over 51 minutes. The conversation touched on Brown’s career and his various stops, his coaching philosophies, and what he sees from the Minutemen this fall, among other things.

We decided to give a summary of what was said. Needless to say, Brown is very excited in his second go-round in Amherst.

— Asked about what it is like to be back in his home state, the Spencer native said it was good, and mentioned how UMass has used the transfer portal to find players “who can immediately help your program.”

— More on the portal, Brown noted how UMass started with roughly 71-72 players last fall, and how that “really impacts your depth in a negative way.” Brown said the portal helped fix that for this year’s team.

— On Brown’s time in Michigan, he was asked about recruiting both Massachusetts and New England, for which he was very active. Brown said that “at times, it was” a hard sell to the other staff members at Michigan. “But we had a good staff that was open in recruiting.” He added that he takes “recruiting New England players personal because that’s your home.”

— Brown commented on the state of FBS New England football with Jeff Hafley at Boston College and Jim Mora at UConn by saying, “Those guys are both excellent football coaches.” He said, “It’s nice to see the schools in this area attracting guys of that caliber. It only means good things for the guys from New England, that’s for sure.”

— Of his return to UMass, Brown said “I really couldn’t turn it down.”

— On the game atmosphere being less than stellar in recent years, Brown said “You hit it on the head. They can’t just come to the game, hang out outside, and have dinner, a couple of beers and socialize, and leave. That’s not what we’re looking for. We’re looking for the opportunity to play in front of them, to earn their respect, to earn their support. That’s really what we’re talking about as a program.”

— On the importance of getting a new field, Brown said “When you have players who are giving their all, the first thing you need is an environment that they can feel good about.”

— Regarding the quarterback room, Brown noted how Zamar Wise is a dual threat. He said Brady Olson is throwing the ball “extremely well.” Gino Campiotti is someone who they brought in from the West Coast, and Chase Brewster came in from Tilton. “All four of those guys, it’s funny, each guy is a little bit different.”

— Brown was asked about the mat drills, which were a big hit on Twitter. “Physically, you want the players to be challenged. So, we put them through several body movements: seat rolls; dive on their chest; crab; forward rolls; side-to-side running; the 20-yard shuttle type of scenario. . . . But really, what I tell them is, I’m going to break every one of you on this mat.”

-He was asked about what he likes about his running game heading into the fall. “You need to be good at tailback to run the rock. . . . When Ellis (Merriweather gets the ball, it’s not 180 pounds running at you, it’s 2-2-5. Two-two-five smashes you.He’s not afraid to do that.”

— A big issue with the program is the lack of conference affiliation. Brown was asked about that. “I can tell you this: (athletic director) Ryan (Bamford) is hell-bent on finding a place for us to go. But it’s got to fit. It’s got to be a good fit for UMass.”

— On the Don Brown Football School, he said, “We wanted to make sure the young men in New England know that they have a home in UMass.”

— When it comes to assistant coaches Jeff Moore and Valdamar Brower, Brown said, “I told Jeff Moore back when he was at St. Thomas More, and then he was at Loomis (Chaffee), I said if I ever get to be a had coach again, you’re going to be one of my first hires, and you’re going to run the recruiting.” On Brower, Brown said, “Just seeing how he treated people and how he had grown as a coach, again, it’s another guy that I earmarked that if I ever got back in the head coach world, I knew he’d to be on our staff.”

— Brown talked about the overall athletic department, including the men’s hockey and basketball programs. “What (Greg) Carvel has done with the hockey program is totally ridiculous. I’m just proud to break bread, sit at the same table, and so forth.”

— Brown relayed a story of how he came to be the baseball coach at Yale. He was honored that 24 of the 25 players from that team visited him recently at Michigan.

— Regarding his defense coming this fall, Brown said, “Don’t let anybody set goals for you. There’s only one thing I demand: learn the playbook, and run to the ball. If you don’t run, you will not play for me. You will not play one minute.”