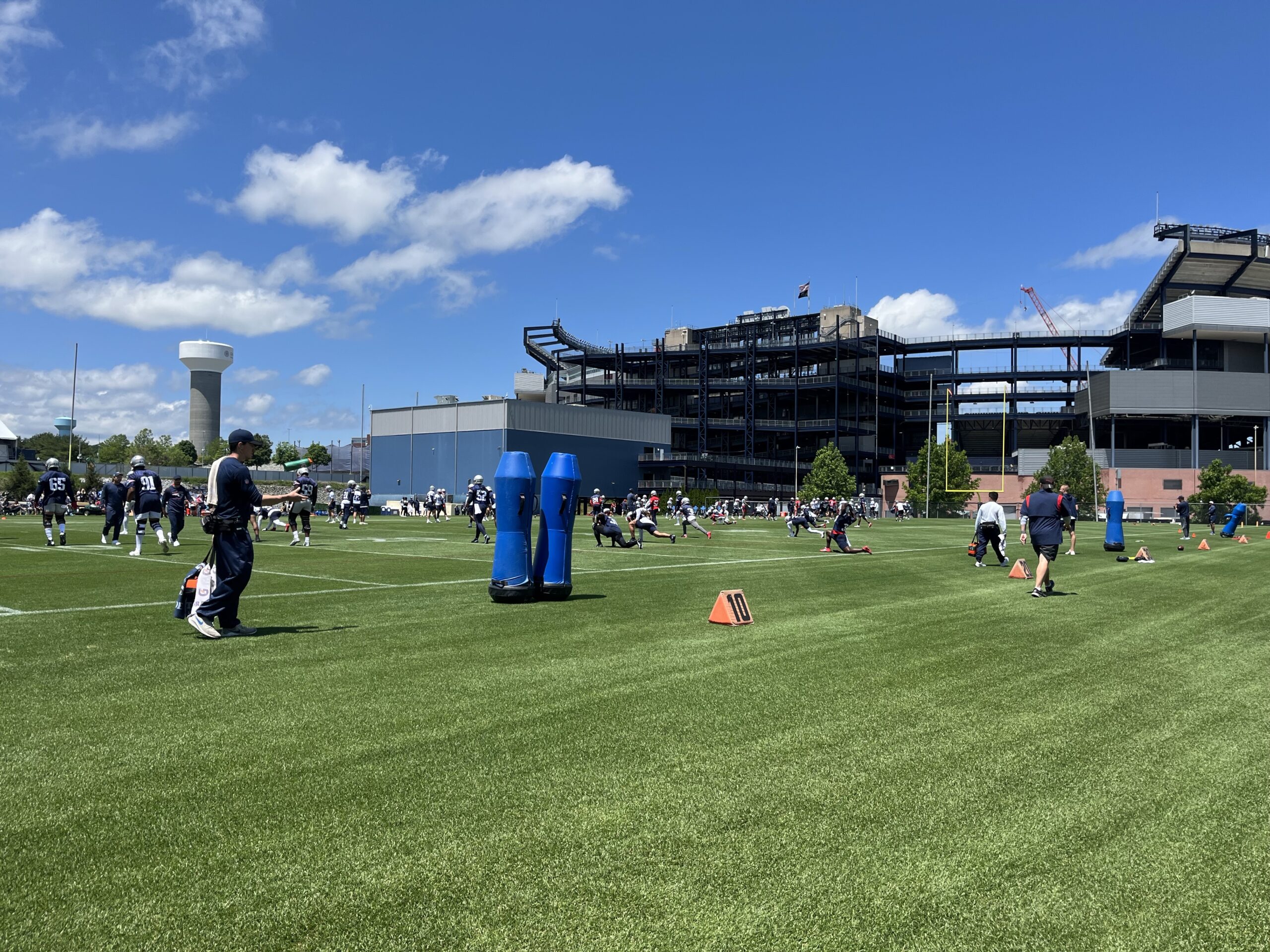 FOXBOROUGH – So much for the full day of rain.

It turned out to be a beautiful day at Gillette for the second of three mandatory mini-camp sessions and once again, there was some positive signs in all three phases. Here’s what stood out throughout another lengthy two-hour practice on Wednesday…

-Coach Belichick met with the media before practice donning a green Celtics hat and opened with a message:

“Start off with a big Go Celtics,” he said. “Big one here tonight so I am sure the fans will be out in full force and see if we can bring this one home.”

-Bon Jovi was in the house, which meant plenty of hits blaring over the loud speakers set up on the lower field sideline. Matt Judon was belting out a bit of Livin’ on a Prayer’ during the stretching period.

-Speaking of Judon, once again he looks good, although obviously nothing is full speed yet. He was wearing a hoodie under his practice jersey throughout the afternoon as temperatures climbed as well. Brought the energy too, particularly early. It’s June, but Defensive MVP isn’t off the table for him if he can perform at the level he did early last year for the entire 2022 campaign. Guys clearly gravitate towards him.

-There were some fans in attendance in about 100 seats that were set up behind the Patriots’ sideline, and they actually got a pretty good show by mini-camp standards.

-Jerod Mayo has a pretty good spiral as he was throwing short passes to linebackers who were back-pedaling then breaking on the ball during positional drills.

-Coach Belichick bounced around a bit early on, taking a quick look at a defensive-line drill and then a linebacker drill before heading back towards the 50. Ultimately, he spent a large chunk of the day with Utah State defensive coordinator/safeties coach Ephraim Banda. The two chatted throughout team and positional work, while Bill kept an eye on everything going on in front of him around the defensive side of the 45-50-ish yard line. Banda previously coached at Miami for five years, serving as both safeties coach and he was co-defenisve coordinator his final two seasons there.


-Jake Bailey put on another entertaining performance during early special teams work. Jake Julien continues to put on a knuckle-ball like display with some pretty good distance. Bailey’s ability to both boom the ball and pin it along the sideline so far with regularity has been ridiculous.

-Tre Nixon continues to be that early guy that’s flashing, but there’s reason to believe he might stick in a legitimate role if he keeps performing the way he has. In almost identical fashion to the catch he had on Tuesday, Nixon hauled in a ball from at least 40-yards out near the sideline right in front of reporters, a post-corner (maybe just a corner?) dime from Jones. It wasn’t his only big play of the day…

-On the very next snap, Brian Hoyer threw a ball over two defenders on a similar route heading the opposite way, and rookie Tyquan Thornton was the one hauling it in, drawing a big cheer from teammates.

-Calling it now, Jonnu Smith is going to be a problem for defenses this season. After a strong performance catching the ball on Tuesday, Smith was back at it on Wednesday with an even better showing. On one throw from Jones in particular, Smith leapt up and grabbed it, contorting his body along the sideline to snag a PBU away from Kyle Dugger. Smith was fired up after the play, as was Jones.

-Rookie Jack Jones had a hell of a day, grabbing two interceptions in different periods and a PBU later on. His first interception was the one that stood out the most, jumping a slant from Zappe intended for Kristian Wilkerson. The PBU came late in the day during 7-on-7’s against Agholor.

-Devante Parker has quietly gone about his business and I’m not sure I’ve seen him drop more than one ball in drills or live action. Mac hit him deep right at the whistle to signal moving on to the next period about halfway through, could be fun to watch this year if the chemistry continues to build.

-Troy Brown could literally play right now and produce in today’s NFL. Just absolutely jacked. While coaching kick off return work, Jerry Thornton of Barstool Sports and I both agreed that it’s really not even debatable.

-At one point with Linkin Park blaring, Agholor began jamming out on the sideline, pretty funny. Bon Jovi, Journey, AC(lightning bolt)DC and Disturbed were all cranking just before that, felt like I was back in a high school lacrosse locker room with the LP & Disturbed.

-At one point Agholor yelled “bye, bye! bye, bye!” after catching a slant from Mac Jones in front of Jack Jones and taking off for the end zone.

-The highlight of the day and really all offseason so far came about a half hour before practice ended. In wildly similar fashion to the earlier catches on the sideline, Jones hit Nixon with another one, but this time Nixon was able to grab it one-handed with Marcus Jones draped all over him. Mac and a few other teammates sprinted downfield while the catch drew an eruption from everyone and a gasp amongst the reporters along the sideline.

-Nixon brought in a tough catch going over the middle in late 11-on-11 work, continuing his ridiculou day. Tyquan Thornton also had a nice grab on a slant in the same period.

-Kendrick Bourne beat Malcolm Butler clean going over the middle, but the ball was tipped and Butler was able to recover and make an interception before sprinting down the left sideline. Cole Strange was there to make sure he didn’t go the distance though.


Through two days, it’s hard not to get excited about guys like Jack Jones, Tre Nixon and the fact that Mac Jones has rarely made a bad throw throughout OTA’s and now the mandatory part of camp. Mac has been more demonstrative and assertive and it seems as if Patricia is calling the plays with Judge talking to Mac after various reps. If this is an early indication, then this offense does indeed have enough talent to cause problems, it’ll just come down to how guys are used and whether or not Mac can elevate others like another QB used to do.

The Patriots wrap up the mandatory portion of mini-camp on Wednesday.