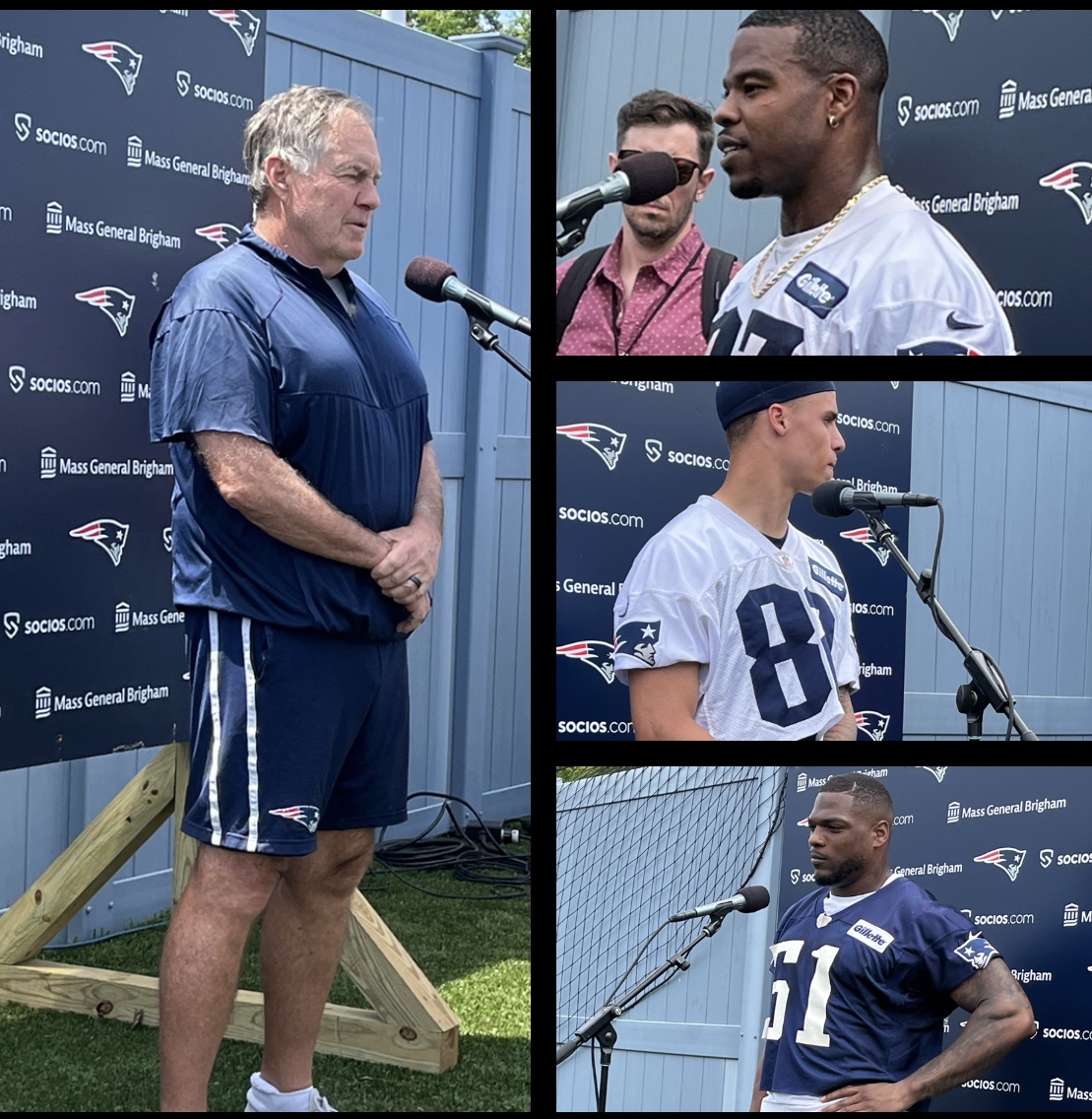 There was a slight first day of school vibe on the lower practice field behind Gillette Stadium on Tuesday afternoon.

Mandatory mini-camp began and aside from a few excused absences, just about everyone was in the house for the first of three straight practice days. There was definitely a bit more tempo to the near two-hour session compared to the optional OTA’s and we even got a small skirmish at the tail end of the day. Here’s what stood out as we start to get a sense of what the 2022 Patriots will look like…

-Energy was high from the jump and Matt Judon was leading the way. Good to see after he wasn’t around for OTA’s, he looked to be in great shape too.

-Early on one of the most entertaining parts of the day came when Jake Bailey started booting balls to the moon. 98.5 The Sports Hub’s Alex Barth was nearby tracking hang time and it reached five seconds or right around that mark several times. The positioning of the ball in the corners inside the 10 was impressive as hell too.

-The first bit of 7-on-7 work meant ‘Crazy Train’ blaring over the loud speakers. Felt like a game day for a few seconds.

-Isaiah Wynn was on hand after skipping OTA’s. Trent Brown was out for the start of practice but did make an appearance about 15-20 minutes in.

-Ty Montgomery and Tre Nixon really stood out with some extra reps. Kendrick Bourne was absent, so both guys took advantage of their opportunities. Both guys could play a variety of roles with their speed and route running abilities.

-Speaking of Nixon, the prettiest play of the day came on about a 40-yard dime from Mac right in front of where most of the media was standing. Jones laid a ball in over Nixon’s shoulder and he was able to corral it along the sideline. Jonathan Jones was in coverage. Mac was extremely fired up with a few “yeahhh’s!” after the catch.

-One of the new rookie defensive backs Jack Jones had a really nice PBU over the middle on a slant during 7-on-7 work.

-Three years ago when I first interviewed AJ Dillon I thought he was the most jacked human I’d seen. Rookie running back Kevin Harris might give him a run for his money. Harris could be a very interesting third down or goal line guy if he’s able to earn the opportunity. He can catch a bit, but just the size of him up close screams “bulldozer.”

-Bailey Zappe had a nice completion on the sideline to Nelson Agholor at one point. Both Zappe and Mac have looked good in the time we’ve seen them.

-Mac was particularly good on Tuesday. Jones was making deep ball throws look easy, hitting throws on the sidelines with precision and getting it out quick on dump offs and quick slants over the middle. Jones also stepped up out of the pocket and took off a few times when things broke down.

-One of those times was when Christian Barmore got through with ease, he’s still just an absolute beast and should only get better in Year 2.

-I still have absolutely no idea who’s calling plays. There were times where it was Matt Patricia in the huddle with guys, there were times where Mac is solely communicating with Joe Judge and Bill Belichick is still around for all of it back behind the quarterback. Bill did involve himself in other areas today, but the focus on offense is clearly going to be a point of emphasis for him going forward.

-Hard not to like Devante Parker early on. Jones hit him on a deep ball down the right sideline over Jalen Mills at one point and it was a clear “well, that’s why he’s here,” moment. Between Parker and Thornton, along with Nixon and Montgomery and others, there might be more weapons for Mac than we initially thought.

-Jonnu Smith and JJ Taylor both flashed receding the ball at times on Tuesday both in 7-on-7 and 11-on-11 work. Taylor caught a couple pretty balls running up the seam while Jonnu had to extend for a couple and showed some fire with a “let’s f’n go,” after one catch. Two more guys who could make an impact if put in the right positions.

-Kyle Dugger made a diving interception, almost Edelman-against-Atlanta like, saving it from hitting the ground. NBC Sports Boston’s Tom Curran told him it was incomplete after, but Dugger insisted there would have been a challenge flag thrown.

-On the final snap of practice, Terrance Mitchell ripped a ball out of the hands of Agholor over the middle. There was a scrum for the ball and that scrum soon turned into a bit of a dust up before the team hit the hill for roughly 10 minutes of conditioning.

All in all some interesting nuggest from the first day, Wednesday and Thursday should be very interesting with severe rain in the forecast. You know Coach Belichick loves him some miserable weather situational football.