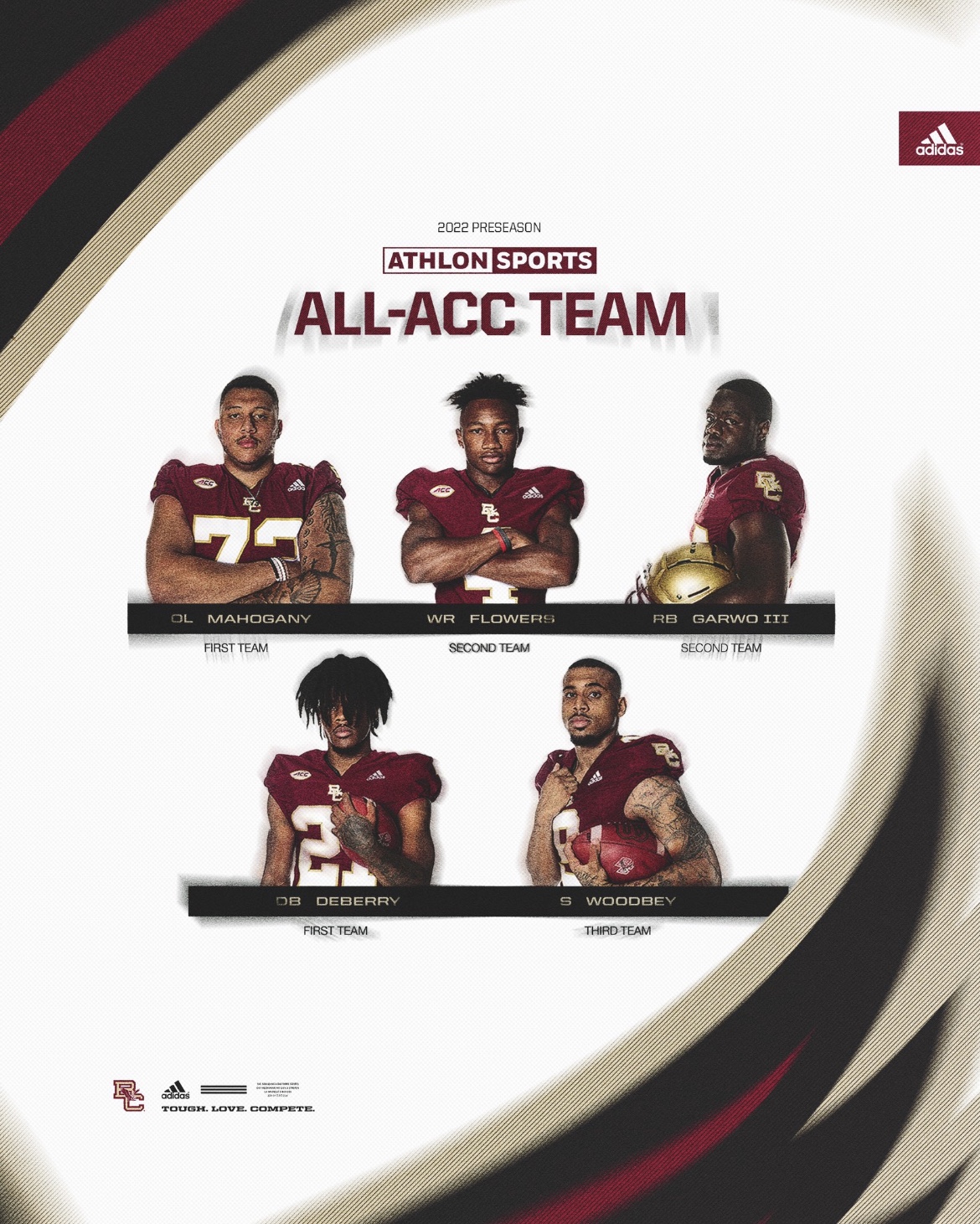 
Things will ramp back up for BC in a month or so, but on Friday afternoon, Athlon Sports had five players from the Eagles squad on its preseason All-ACC teams.

Christian Mahogany, Zay Flowers, Pat Garwo, Jaiden Woodbey and Josh DeBerry were named to the team. DeBerry and Mahogany were first team selections, Flowers and Garwo second team and Woodbey third team. It’s somewhat stunning Flowers wasn’t also a first teamer, but it does speak to the amount of talent at wide receiver in the ACC.

Mahogany is now the veteran of the O-line room and barring anything crazy he could very well be one of the top linemen in the country. A drop off on O-line play will be the lazy, popular pick in terms of criticism for BC nationally heading into the year, but Mahogany and the rest of the line have a chip on their shoulder and this preseason first team accolade should be a prelude of what’s to come for Mahogany and his group.

DeBerry gaining first team acknowledgement should be huge for his confidence and add a little extra swagger to his game. With Brandon Sebastian now in LA with the Chargers along with Zion Johnson, DeBerry is going to be one of the guys relied upon heavily in 2022 to lock people down outside and should be able to do so. DeBerry’s game has flown under the radar lately, especially last season.

Flowers not being on at least second team would have been criminal. Everything is lined up for Flowers to have one of the more special seasons for a receiver in BC history, propelling him into the NFL Draft. His recent willingness to stick with the program for his final season when $600,000 was put in front of him to transfer just shows how committed he is to having a special year, don’t be surprised when he’s a first teamer in December.

Garwo has been a quietly consistent leader over the last two seasons. Ever since AJ Dillon left the running back position hasn’t gotten nearly as much love as it used to, but Garwo is the definition of dependable and his work ethic has set an example in both the offseason and regular season. Second team is a lofty expectation for him, but one Garwo should be able to meet. Garwo and the rest of the backs are going to need to contribute regularly if the the new offense under OC John McNulty is going to click on all cylinders.

Woodbey selected as a third teamer is interesting and undoubtedly will be used by him as motivation. Woodbey has talked regularly on social media about being the best safety in the country and if you’ve ever watched him work, you know it’s a very attainable goal. Woodbey is a guy who will set the tone physically and can cover just about all of the speedy receivers in the ACC, it just hasn’t really been noticed yet. The Eagles may benefit as a defensive unit with this “slight” as a third team selection if Woodbey uses it to his advantage.

As a whole, the five selections speak to some pretty lofty expectations nationally for some of BC’s top talent. The expectations nationally will never meet what the local fan base now has for them in Year 3 under Hafley, but these nods from Athlon Sports do show the Eagles are on the map, it’s now just a matter of whether or not Hafley and his crew can put it all together.