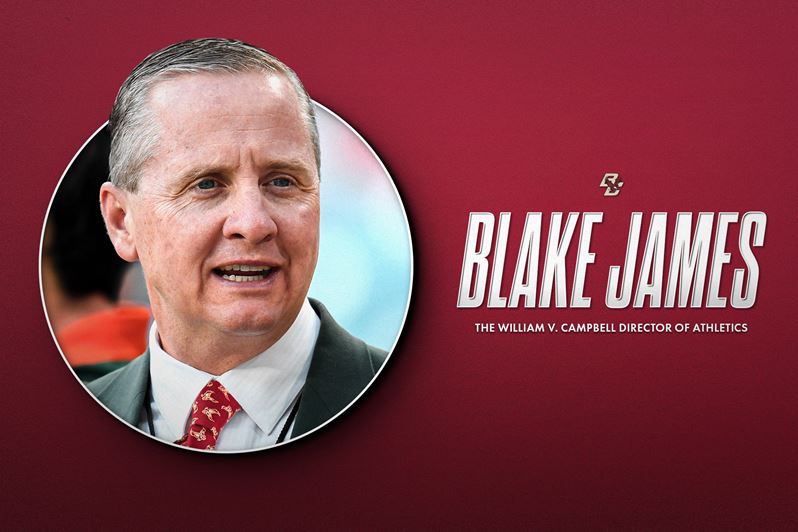 In a statement, James said it was an honor to be coming to Boston College.

“It is truly an honor to join the Boston College family as the William V. Campbell Director of Athletics,” said James. “I am grateful to Fr. Leahy for the opportunity to lead the Eagles and for his confidence in me and in our shared vision for BC Athletics. We will strive for excellence in all of our pursuits in alignment with our Jesuit values. We will compete for championships with integrity, with incredible young men and women, and talented and compassionate coaches and staff supporting their journeys.”

James has committed to staying at Boston College until he retires. Stability and continuity were important to school after James predecessors Martin Jarmond and Pat Kraft only stayed at the school for a combined five years.

That commitment is especially important for Jeff Hafley and the football program. Hafley is on his third athletic director in three years. That is not good for any coach let alone the football coach.

Hafley has committed to staying at the school by signing a contract extension and now the hope that the school has an athletic director who will stick around with him for more than three years.

James has a proven track record in both fundraising and facilities. Both areas are important to the long term viability of an athletic department and the football program.

James was integral in the building of a new football facility at Miami, one the school desperately needed. One has to assume he will want to enhance facilities here which could benefit the football program and the entire athletic department.

Football is the school’s most high profile program and it brings in the most money. James has proven in the past that he values football and will do whatever he can to support the program.

James ACC experience gives him a better understanding than most athletic directors of what it takes to compete in the conference. It is why he ultimately got the job and why his hiring could benefit the football program.

If Boston College is going to take the next step and consistently compete for ACC titles and the college football playoff, they will need even more of a commitment from the school. The hope is, James can give Hafley and his staff what they need to take those next steps.

As always. Time will tell. For now. Blake James is a positive hire for the football program and the athletic department.