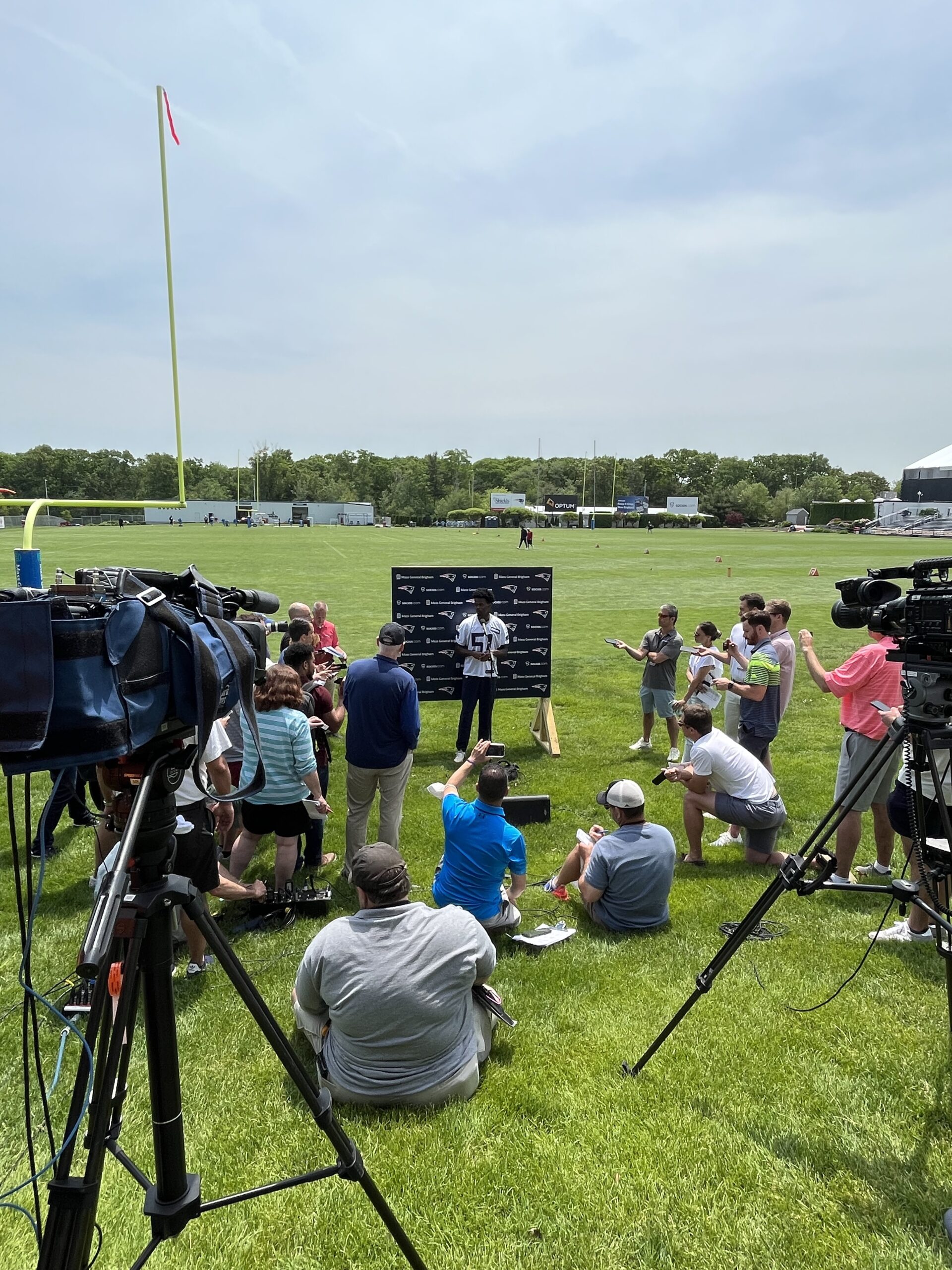 FOXBOROUGH – The Patriots were back on the practice field in front of the media for the second time on Tuesday afternoon.

With mandatory mini-camp set for next week (June 7-9) there were still some guys missing since this week is still voluntary. Bill Belichick spoke prior to practice too, here’s what stood out…

-In total there were only 10 guys still missing, which is pretty damn good attendance for “voluntary” work outs. Matt Judon and Isaiah Wynn continue to be the biggest ones. Trent Brown wasn’t there on Tuesday, but he was there for the first open practice last week, so I’d have to think it was a maintenance day or something along those lines.

-Belichick opened his availability acknowledging the Celtics’ win on Sunday and the subsequent berth in the NBA Finals. Belichick also gave former running back Danny Woodhead a shout out as he tries to qualify for the U.S. Open that will be coming to The Country Club in Brookline in a few weeks.

“Morning. Another great series for the Celtics, so congratulations to the team, the staff, the organization. Great accomplishment, looking forward to seeing that play out, he said. “Also keeping track of Danny [Woodhead]. One more step to get to the U.S. Open, so, pulling for him.”

-Belichick was also asked about the relationships between he and other coaches in town and whether or not the local coaches share ideas with each other.

“It’s been great. It’s been great going all the way back to when Rick (Pitino) was here when I got here. Bruins, Red Sox, Celtics, it’s been a great relationship with our players and their players, and the teams and coaches, from my standpoint. It’s been great,” he said. “Yeah, sure. Some things in common. Both in Boston, pro sports. Some of those guys move on, like Doc or Tito or Tommy, who was here, obviously, briefly. Dave Dombrowski, guys like that. It’s good to stay in touch with them, even though they’re in different organizations, still going to pull for the home team. The relationships there, they extend past the initial introduction.

-If you were thinking we might get a little more clarity on the coaching “titles” as we move along this spring you’re going to be disappointed. With Matt Patricia working with the O-line and both Joe Judge and Bill Belichick heavily involved in the offense Tuesday, this is how it’s going to be. It’s obviously still wicked early, but honestly don’t be surprised if BB ends up calling the plays. Judge feels like more of a QB coach right now just based off his interactions with Mac, Zappe and Hoyer. Again, things could change at any point between now and September though.

-The offense didn’t do much as it was mostly a conditioning practice with quite a bit of running and the session only lasted about an hour. But, Judge could be heard clear as day yelling “great F’n ball baby!” on a Mac throw at one point during some QB/WR drills. He (Judge) is very vocal to say the least.

-Mac has looked good and has also been one of the last guys off the field at the end of both open practices, working on throws for quite a while. During the individual and team drills Jones continues to make pretty much every throw. Feels like it’s coming out a little quicker too, we’ll see when things start to speed up next week.

-Calling it now, Malcolm Butler is going to surprise people this year after taking a season off. He’s motivated & looks good so far.

-Jonnu Smith made a sick one-handed catch during drills. Hunter Henry also hasn’t dropped a ball yet (at least that I’ve seen). I’m still holding out hope the two-tight end offense is a legitimate threat for the Patriots’ offense this season.

-DeVante Parker has been consistently solid during the light work too, I’m really looking forward to seeing how he looks when things go live during mini camp.

-New rookie WR Tyquan Thornton and Jones were side-by-side during some of the conditioning, with Mac “out-running” him, although in fairness it looked like Thornton was probably going 3/4 speed by his standards. Thornton also met with the media for the very first time aside from his post-draft Zoom.

“It’s a process every day, just trying to come in, work and get better,” Thornton said. “I’m making strides every day. Thornton also stressed that he’s working hard on his route running, particularly moving his arms more when getting in and out of breaks. (If you don’t immediately think of the Bette Midler Seinfeld episode upon reading that we probably wouldn’t be friends). You could hear coaches yelling for him to do so a few different times during some of the early work for the receivers.

-McCourty, Hoyer, Slater, Nick Folk and Cody Davis were in their own little sprint group a little bit ahead of the team. The rest of the team was lined up along both upper fields during about 20 minutes of running from 11:50-12:10 before breaking off for positional work. There were a few team drills, but nothing crazy.

-I’m probably going to write this 500 times by the end of the season, but I love watching Damien Harris finish runs, even in June. During one carry, Harris repeatedly yelled “yeahhhhh, yeahhhhh,” as he crossed the goal line.

-Mr. Kraft was also on hand for practice Tuesday, strolling out right around the beginning of the hour and standing on the sideline in-between the two field for the whole practice.

-Cole Strange spoke to the media for the first time as well (aside from his Day 1 introduction) and seems to be getting acclimated quickly. He’s probably a starter, so he really doesn’t have a choice.

“Not to sound cliché, but this is a dream come true,” said Strange. “Every single day I come out here I’m just really trying to keep working to get better. Once again, as cliché as it sounds, I think it’s just like, the fundamentals and the basics don’t change. I’m not saying I’m at that level yet, but no matter how good you are, no matter what level you’re at, you always have to work to get better at those and I know that’s very true for me.”

All in all, it was more of a “get back into the swing of things” day for the Patriots more than anything it felt like. Mac looks good, Coach Belichick and Coach Judge are firmly entrenched in the offensive work and whether we in the media or fans like it, there doesn’t seem to be “too many cooks” in the kitchen for now, but again, it’s early. Next week should start to provide at least a little more clarity on a number of things both offensively and defensively.