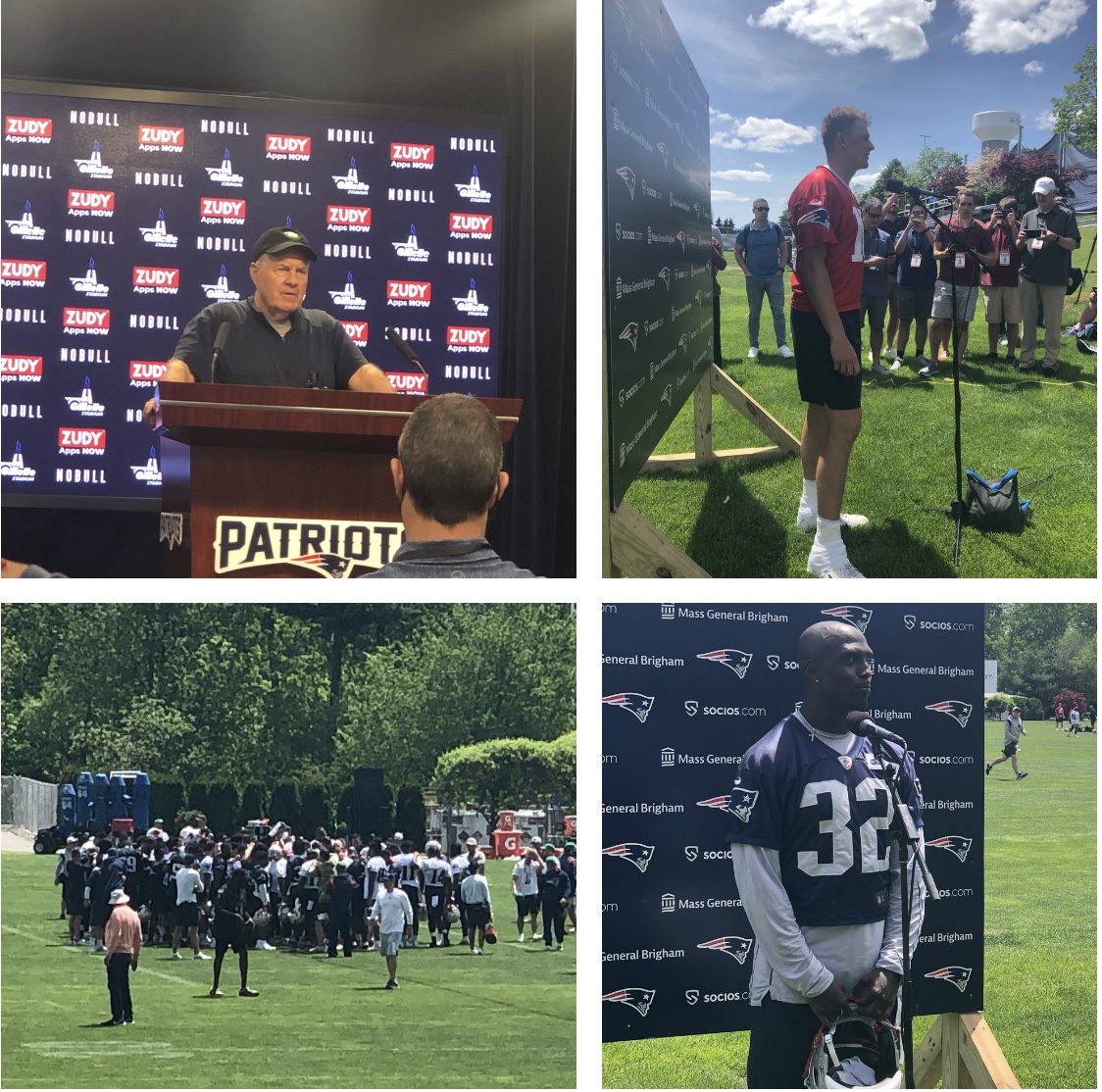 FOXBOROUGH – Football is back.

Ok, obviously not really, but the practice fields behind Gillette Stadium were buzzing on Monday morning as the Patriots were out for their first OTA practice. We’re still in the non-mandatory portion of mini camp, with mandatory OTA’s set for June 7-9. Still, there was an impressive amount of players on hand for the first practice and we started to get a little bit of clarity on which coaches will be performing which jobs this year. A few things stood out while watching the near two-hour practice…

-James White was in attendance. There wasn’t much to see, but just the fact that he was out with his teammates about a month or so after telling the media he had *just* started walking is impressive and speaks to his desire to get back out there with his teammates. I’m still not sure you’re going to get anything out of him this year (which is why Pierre Strong is here), but it was still nice to see No. 28 back on the field.

-There were 12 guys missing from the voluntary practice, with the biggest missing pieces being Matt Judon, Jabrill Peppers, Adrian Phillips and Isaiah Wynn. “All the guys that are here are working hard and I think they’re all improving. And those other guys that aren’t here, I’m sure they’re working too. That’s the way it is,” Belichick said.

-Malcolm Butler looked to be in excellent shape. This is important given the fact that he was away from the game for a year. Butler and Terrance Mitchell were the defecto “No. 1’s” on Monday, but that could obviously change. Butler is going to be an important piece to this very questionable secondary, so the fact he’s in shape and ready to go for voluntary OTA’s is a great sign.

-Coach Belichick donned a Celtics hat for his pre-practice availability prior to Game 4 of the Eastern Conference Finals. Players all took the field wearing C’s hats as well and the coaching staff wore them throughout the afternoon. Belichick added a “let’s go C’s tonight, it’s a big one,” during his opening remarks. Belichick also extended his condolences to the Cappeletti family and a congratulations to Vince Wilfork on his recent Patriots HOF news.

-Both Mac Jones and new rookie QB Bailey Zappe threw the ball well when given the opportunity on Monday. Old reliable Brian Hoyer was out there too and as usual, had some flashes of greatness and then a few throws/decisions that remind us why he’s been a career backup.

-Belichick and Joe Judge worked very closely with the offense. Both of them seemed to relay info to Jones at times and Jones would then relay it to the offense. This isn’t anything ground breaking, but it was our first time actually seeing Judge and Belichick working with the offense this year.

“Obviously he’s a great defensive mind, but he also has great offensive knowledge, they’re all helping out and making things really easy for us and just teaching us what they know,” Jones said of the early offensive set up. “It’s been really good just to be able to stand up in the meetings and talk through things with everybody, and everyone’s on the same page, regardless of who’s talking or who’s saying what. We have a very good group of guys. I think it’s obviously always about the players and having great coaches is obviously very beneficial too. But we have a great group of guys — old guys, young guys, and we’re excited to come together and work.”

-Matt Patricia – as he told us he would be last week – was mostly with the offensive line group. “…I mean I work with all the coaches. Just try to be involved in everything, I think that’s a head coach’s job: to support all parts of the program,” Belichick said when asked about roles. “Do we have titles? Yeah, look, there’s a lot of jobs that we have to do, we’re all working on those things now but — it’s May. They’ll change in June, they’ll change in August, they’ll change in September. So, we’ll evolve it to the things timely that we need to do. If you’re asking about game plans, we’re months away from that — months.”

-Early on, Judge ran a lap with the offense.

-Lots of very basic running game stuff during the morning and into the early afternoon. As he has done after literally every snap I’ve ever seen him take, Damien Harris finished off all of his runs with full field sprints. They always say “play till the whistle,” and Harris takes it to heart, always appreciate that about him.

-Both Kendrick Bourne and Nelson Agholor had pretty back-shoulder catches along the sideline at one point on great balls from Mac.

-New addition Devante Parker hauled in a long post from Hoyer towards the end of practice, showing his speed & separation ability. Can’t wait to see him and rookie Tyquan Thornton on the field together. Parker & Bourne already had an extensive handshake down to a science too.

-Speaking of Thornton, we didn’t see the rookie break out that 4.2 speed just yet, hopefully it’s coming sooner rather than later.

-Raekwon McMillan was at middle linebacker and is probably going to be a very important piece to that LB core this year with the losses of Hightower, Van Noy and Collins.

-After starting practice around 11:35, the team split up for sprints at 1:04 and ran until about 1:20. Jones was also one of the last guys to leave the field and meet with the media after getting about 15 minutes of extra throwing in.

-It’s early and none of us have any idea how this chain of command may affect Mac’s development in this crucial second season, but he doesn’t seem phased by any of the uncertainty just yet.

“I think right now it’s all about learning — first day, you come out and you set a baseline, fix the things that you want to fix, and like I said, they all have a great knowledge of our offense and we’re all on the same page so that’s the important part to me,” Jones added.

“There’s no fall-off or anything like that. It’s not my decision to make and we have plenty of time for all that, so right now it’s about the guys and I getting on the same page, running backs, tight ends, receivers, and then working with the offensive line, doing some things with them just to make sure we’re on the same page. So, it always goes back to the players and we’re excited to grow together and learn from whoever’s coaching us. We don’t mind anybody.”