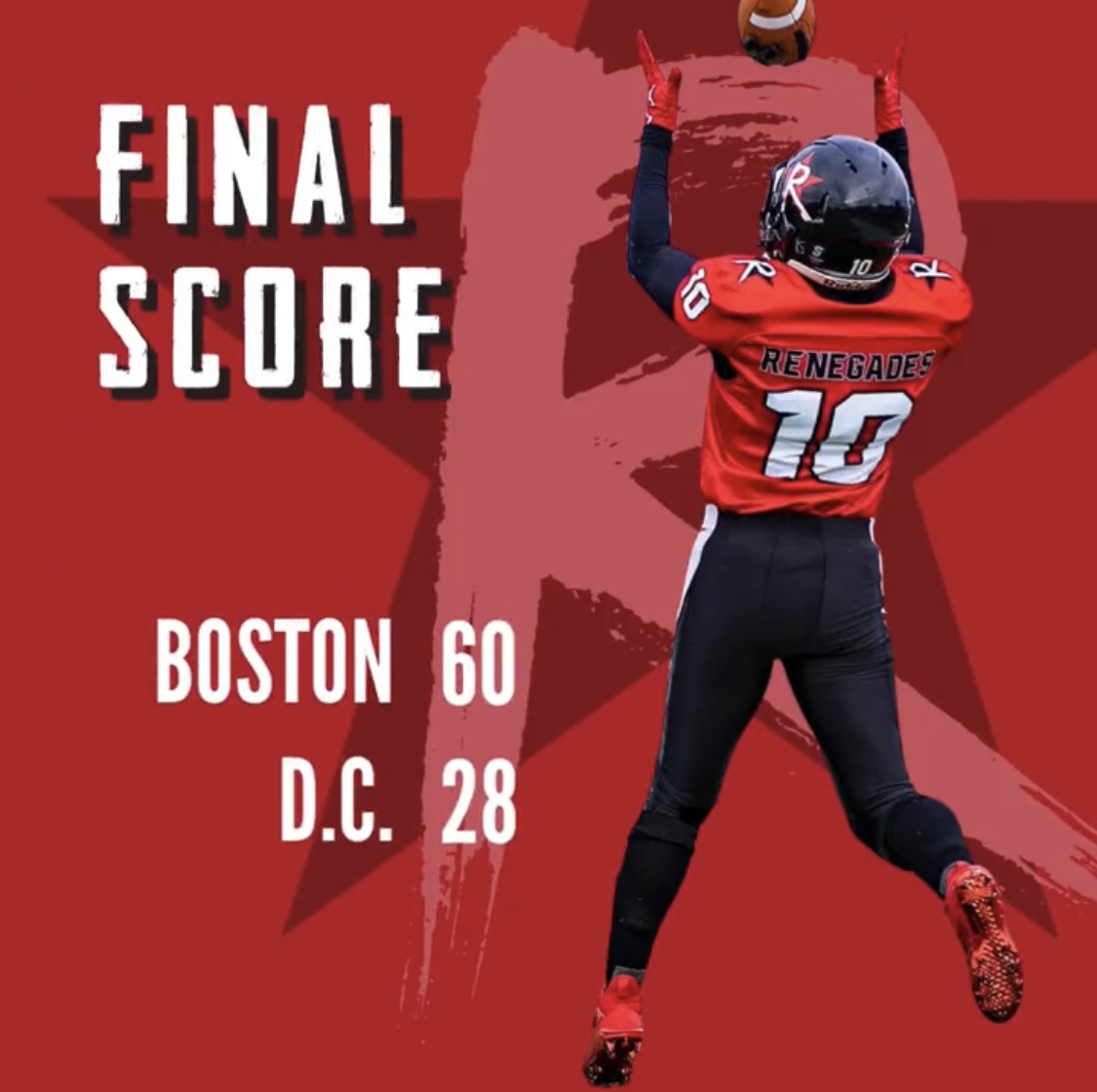 Another year, another unblemished record for the Renegades.

With a 60-28 trouncing of the D.C Divas at Harry Della Russo Stadium on Saturday night, Boston finished the regular season 6-0, pushing the franchise’s unbeaten streak to 23 games dating back to the season opener in 2019. The three-time defending Women’s Football Alliance National Champions will start the postseason on June 11 just two wins away from a return trip to Canton, Ohio, the Pro Football Hall of Fame and another championship game.

While the win was obviously important to continue the momentum rolling into the playoffs, wide receiver Adrienne Smith was equally as big of a story. Smith set a new all-time record for receiving yards in the WFA. Smith needed just 19 against the Divas to surpass Jeanette Gray (5,092) on the WFA’s all-time receiving yards list. After making three receptions earlier in the game, Smith caught the record-breaking pass from quarterback Allison Cahill in the third quarter. Smith also scored a touchdown on the play, her second of the game.

Gray played seven seasons in the WFA with the Chicago Force, winning receiving titles in 2013 and 2014 before retiring after the 2017 season.

On a night where various variations of the Massacusets pro women’s teams were honored during the evening, it was fitting Smith was able to do it in front of this particular crowd.

“I couldn’t be happier for Adrienne,” said Renegades team owner Molly Goodwin. “I feel fortunate to have had a front-row seat to watch her career — first as an opponent when she was with the New York Sharks, next as a teammate on the Boston Militia and Team USA, and now as a coach and team owner. I can’t wait to see what she accomplishes next.”

Despite still having the most decorated quarterback in women’s pro football history in Cahill, this year’s Renegades team is relying heavily on the run. In Saturday’s win, Boston racked up 328 of its 470 yards of total offense on the ground. Tytti Kuusinen (16/141/1), Ruth Matta (16/97/1) and Kate Falkowski (15/82/1) did most of the damage. Cahill still threw for 140 yards, three touchdowns and a pick.

The Renegades led 21-0 after one on Matta (1-yard and Kuusinen (7-yards) TD runs as well as an 8-yard reception for Renate Meckl. A 1-yard connection between Cahill and Smith made it 27-0 in the second before the Divas got on the board to make it 27-8 at the half. Falkowski rumbled in from 7-yards out early in the third and a bit later, Smith’s record-breaking TD catch pushed the lead to 41-8. Falkowski added two more TD runs in the fourth quarter and Danielle Fournier hauled in a 19-yard TD late in the game to cap the scoring around a few more Divas’ scores.

All roads have been pointed towards Canton for the 2022 Renegades and after another blowout win, the real push for a four-peat begins soon.