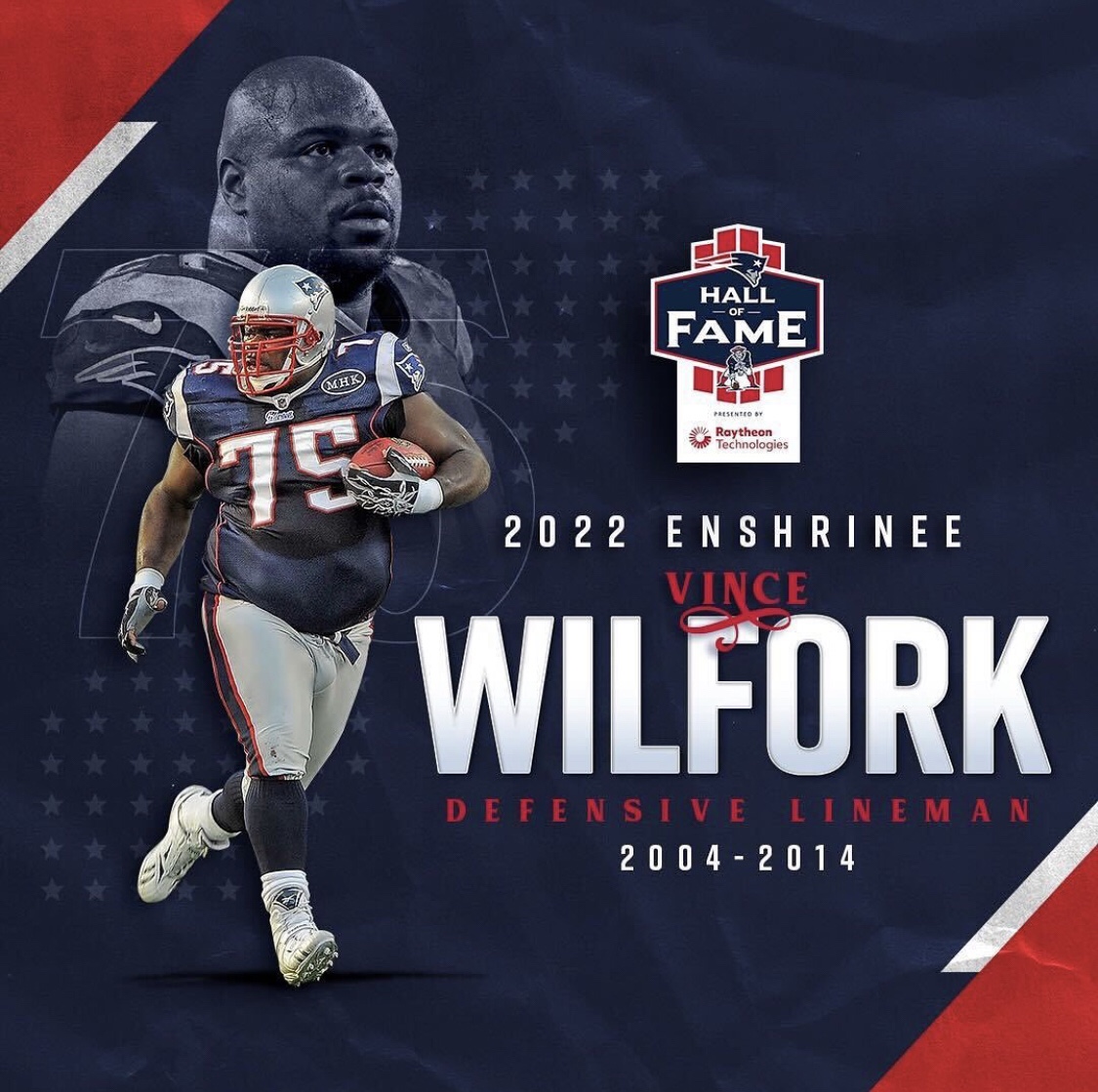 Vince Wilfork woke up to some pretty spectacular news while starting his morning in Louisiana on Tuesday.

Wilfork saw he had missed a call from a 508 area code. He called the number back and was given the news by Mr. Kraft himself that No. 75 was the newest member of the red jacket fraternity after winning a fan vote that also included Mike Vrabel and Logan Mankins. Wilfork will get his red jacket and be honored during a home game to be determined.

“I was actually getting up, I’m up in Louisiana and had a missed call from a 508 number and I called it back,” Wilfork explained on a conference call Tuesday afternoon. “Mr. Kraft was the first one to let me know I made the Patriots Hall of Fame this morning. we talked for probably like 10 minutes just catching up over old times and (I) just let him know what the organization and the Kraft family and New England and everyone of the fans mean to me as a person. I was telling him how grateful I was to be part of such a wonderful culture and brotherhood in Boston.

“Being able to wake up to that beautiful news of being selected to the Patriots Hall of Fame, it means the world to me.”

Wilfork was asked what it means to him to be one of those rare guys who played and won in both parts of the New England dynasty. Wilfork was drafted in 2004 and his last year here was 2014.

“I remember talking to Devin McCourty when he came in and he used to call me old. Now, he’s the old guy,” Wilfork joked. “All my teammates have been great. I never had any issues with nobody. We all had one goal in mind and that was to be the best we could possibly be and win. It was easy for guys to come in and fall in order. For me to be part of the first great dynasty with the old heads like Mike Vrabel, the Richard Seymour’s, Tom Brady, Cory Dillon, Rodney Harrison, Ty Law, Ty Warren, and then all of the sudden you have the Hightower’s, the Mayo’s, Devin McCourty, Gronk, Edelman, it’s a blessing.

“I can really sit back and say it’s a lot of things I learned from the old heads from when I came in, and I can really say it’s a lot of things that the younger guys when our guys became a little older, they learned from me. When I watch them play, I see a lot of stuff that we basically was built on with the foundation of the New England Patriots that started with the guys before me. A lot of credit goes to Bill Belichick and Robert Kraft, the organization.”

Wilfork couldn’t pass up an opportunity to express how much the fans meant to him as well.

“The fan base that we have in Boston, you can’t compare,” he said. “You’ve got a couple places out there that might have multiple professional sports teams that are championship quality and have done it in the past, but there’s something about being a New England guy and a fan and playing sports there. One thing I know, is the fans love their sports and their athletes and as athletes, we love to embrace that.

“I’ve never been and I’ve never played in a stadium with the types of fans that we had and that’s a credit to the fans.”

That same fan base will have a full weekend to let know how much they appreciate big No. 75 later on during the regular season, but on Tuesday, Wilfork humbly accepted the honor he never truly intended on receiving during his playing days.

“Later in my career, I had teammates I played with and they would tell me ‘you a hall of famer,’ he said. “I can sit here and tell you Hall of Fame never drove me to be the best I can. I never once thought about the Hall of Fame when I started playing football, and I never once thought about a Hall of Fame when I finished. That was never on my radar because I love football, my passion was football. Anything else that comes with it comes with it, but I’m not one of those players that said ‘one of my goals is to be a Hall of Famer,’ no, my goal was to be the best teammate I could be, win a championship and win football games. That’s it.

“Now, it’s full circle. Now, I’m done. Now, I can sit back and say ‘I’m a Patriot Hall of Famer.” I see what it means now (rather) than when I played. When I played I never once thought about it.”

Wilfork may have never thought about it, but the fan base that watched him for a decade knew a HOF career was unfolding in front of our eyes every single Sunday.