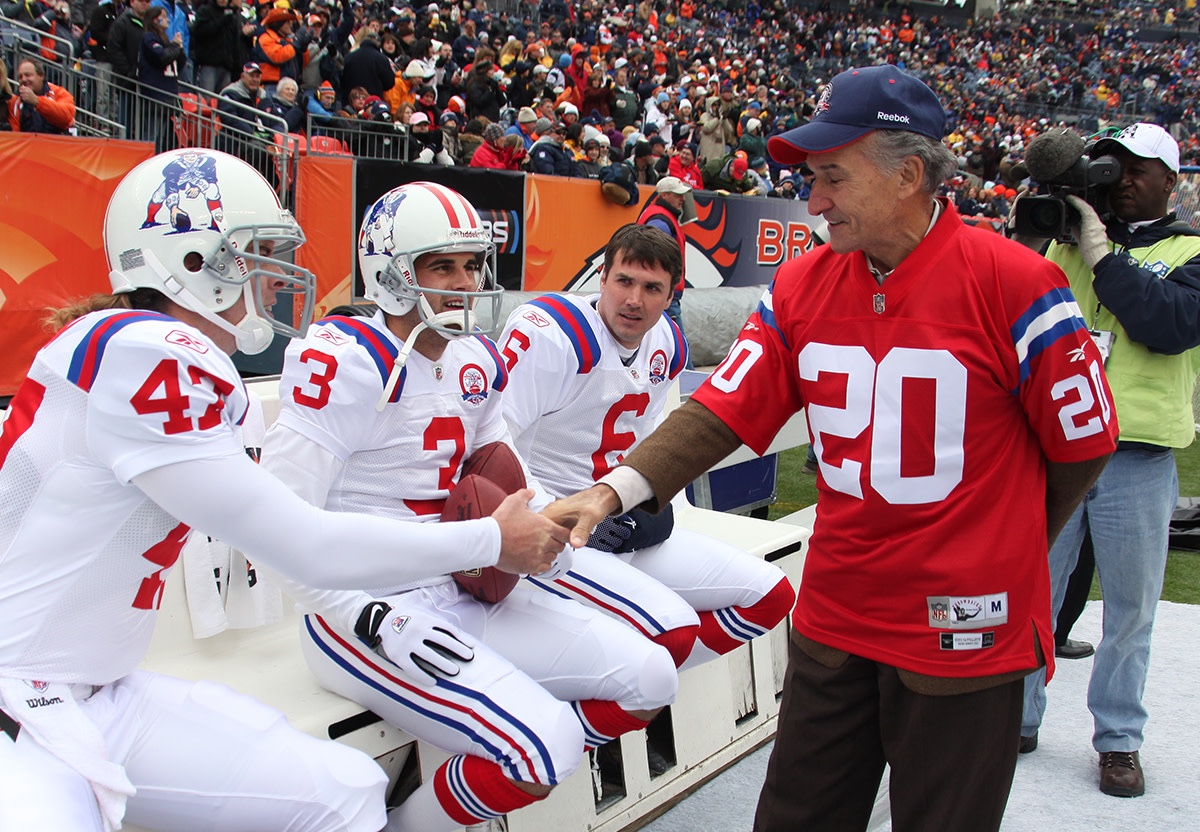 We lost a legend and a gentleman on Thursday as Patriots great Gino Cappeletti passed away at the age of 88. Cappeletti was Mr. Patriot. He had a Hall of Fame career both as a player and as a broadcaster.

We are deeply saddened to learn of the loss of Patriots Hall of Famer, Gino Cappelletti: https://t.co/gtMjrhfdFF

Cappeletti was a wide receiver and field goal kicker. He played his college ball at the University of Minnesota and after going undrafted, was signed by the Boston Patriots in 1960. Cappeletti starred for the Patriots from 1960 to 1970. He was AFL MVP in 1964.

Cappeletti along with Jim Otto and George Blanda are the only players to play in every game of the AFL’s 10 year existence. Cappeletti is the AFL’s all time leader in points (1,100) and field goals made (170).

After retiring, Cappeletti joined the Patriots radio broadcast as an analyst. After a brief three year hiatus where he served as the team’s special team’s coach, Cappeletti returned to the booth where he and the legendary Gil Santos paired up to call Patriots games from 1988 to 2011.

The pair had some legendary calls together most notably Adam Vinatiei’s kick to beat the Rams in Super Bowl XXXVI. The kick secured the Patriots first Super Bowl win. I will always remember the joy in Gino’s voice.

Cappeletti’s number 20 has been retired by the Patriots and he was inducted into the team’s Hall of Fame in 1992.

Owner Robert Kraft best summed up Capeletti’s contributions to the organization and how he felt about him as a player and a person.

“My heart aches after learning of Gino Cappelletti’s passing this morning,” Kraft said in a statement. “For the first 51 years of this franchise’s history, Gino contributed as an all-star player, assistant coach and broadcaster. You couldn’t be a Patriots fan during that era and not be a fan of Gino’s. The Patriots have had many iconic, fan-favorite players over the years. Gino was the first.”

Kraft added: “”I remember watching him play in 1960 and throughout his career. He was one of the AFL’s biggest stars, becoming the first Patriots player to earn league MVP honors and retiring as the league’s all-time leading scorer. He became the second player in franchise history to earn Patriots Hall of Fame induction and I will always believe he deserves to be in the Pro Football Hall of Fame. As great of a player as he was, he was an even better person and storyteller. On behalf of my family and the entire Patriots organization, we extend our heartfelt condolences to Gino’s wife, Sandy, their three daughters, Gina, Cara and Christina, and their 10 grandchildren, as well as the many others who will be mourning his loss.”

I spoke with Patriots Radio Network Producer Marc Cappello who worked with Cappeletti for 17 years. Cappello shared his thoughts on his dear friend and former colleague.

“I mean he’s Mr. Patriot. Been with the team since 1960. Just an old school gentlemen and class act. Was a hall of fame player and broadcaster but also a lovely husband, father and grandfather. The guy did it all.”

Cappello added: “I am heartbroken. I shed a tear or two or three thinking about the good times we had. They were happy tears and sad ones too. I feel exactly the way I did when Gil passed. Incredibly sad. I love Gino for so many reasons and one of them was because he was such a great broadcaster. Just superb. But more important I’ll miss the friendship more than anything. I was so proud to be his producer. The stories he told me. The life lessons he taught me. The dinners on the road and laughs we shared. He was the classiest guy I ever met. A heart of gold. Gino was a legend. The AFL’s All Time Leading Scorer and 1964 MVP. Patriots Hall of Famer and his #20 retired by the team. The legendary duo of Gil & Gino are back together high above the press box and laughing I’m sure. Many thanks to all the people who reached out to me today. I greatly appreciate it. Meant a lot. My condolences to his beautiful wife Sandy. His beautiful three daughters Gina, Cara & Christina and his 10 grandchildren he loved so much.”