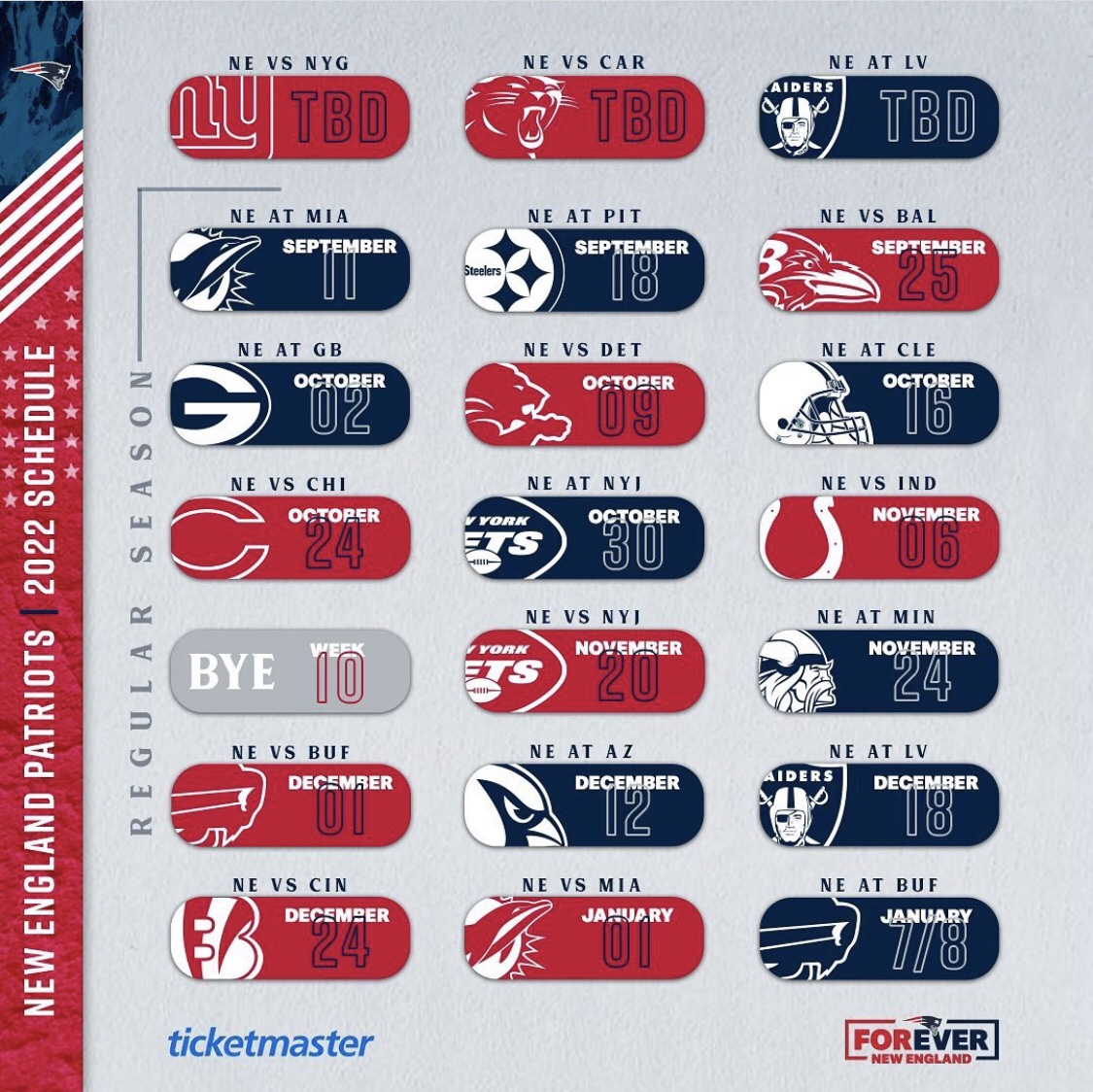 Schedule Day is always a sneaky great day on the calendar for football fans.

No one really thinks about it until we’re all reminded a week or so before that Schedule Day is coming. It isn’t quite the same with Twitter leaks popping up everywhere throughout the day ruining the element of surprise, but still, once the league slate comes out it’s always fun to see where and when the Pats are playing.

This year’s schedule is pretty interesting with some twists and some local flavor as well. Here’s a look at the 2022 campaign that awaits the Patriots…

I love this because it’s a return to the “old days” when it comes to the schedule. The Pats always played down in Miami early in the season and always had to deal with the heat. The long bomb to Troy Brown in overtime is still the signature Miami moment in the Belichick era (we obviously don’t need to bring up the Miami Miracle). The Pats get an early test with Tua, Waddle and Hill.

For the first time in a long time the Pats will have to open up on the road in back-to-back games. Pittsburgh is an interesting matchup because we have no idea what the QB situation will look like by the time Week 2 rolls around. You know you’re always going to get a physical game against the Steelers at the very least.

The Pats don’t get to take the field at Gillette until September 25, but it’s a hell of a way to open the home schedule. Lamar Jackson comes to town, as does UConn’s Travis Jones and former Everett star Isaiah Likely. The Pats could be a little banged up after the Steelers game, but we’re going to know a lot early about this team with this tough start.

Jones vs. Rodgers in Lambeau. What more needs to be said? Pats probably won’t get the full cool snow globe atmosphere you hope to see while watching pretty much any Packers game, but you never know. Another stiff test early.

Dan Campbell and his group of knee-cap biters head to Gillette the second week of October. No matter how the beginning of the year starts, I refuse to believe this will be a very competitive game even if we are five months away.

Cleveland came here and got smacked around last season, I have a feeling it may be more of the same for this still dysfunctional franchise. It felt like the Browns were turning the corner with a playoff win, but the Baker Mayfield fiasco still isn’t solved and I can’t imagine the Browns are suddenly going to be rolling at this point. Nice little two-week cushion for the Pats here as long as they don’t slip up.

Jones vs. Field in primetime? Sign me up. This is the first of five 8:00 games for New England this season, which is a bit surprising given the fact that they’re no longer in that “top tier” of NFL teams right now. Who knows what either team will look like this far out, but initial gut reaction says this should be a third straight win.

Short week by one day, but it’s the Jets. We’ve all seen and heard how they won the draft, and maybe this year they’ll give the Patriots trouble, but this feels like another W in a very favorable portion of the schedule.

Should be a hell of a game. Indianapolis obviously handed New England a critical loss last season and now they actually have a quarterback who can throw the ball more than 10 years in Matt Ryan. If the Patriots have the same kind of performance on offense and struggle against the run again it could be a long afternoon.

Not a bad time at all to get the bye week. You’d like it maybe two or three weeks later as you prepare for that postseason push, but Week 10 is a good time to take a step back, assess and then move forward. Hopefully, the 2022 team handles the bye week better than the 2021 team did.

An extra week to prepare for Jets Week just isn’t fair to the Jets. Hard to believe this one is anything but an ass kicking unless there are unforeseen circumstances.

The Pats get to spend Thanksgiving in scenic Minnesota in what you’ve got to assume will be 25-30 degree temps in late November. I’m sure they’re thrilled. What’s more worrisome is only having four days to be prepared to play a pretty good team at home. Could be a tough one. Former Everett star Lewis Cine will also get to play against his hometown team. A pick of Mac Jones will live on in Everett football infamy if he can grab one. This also starts a run of four straight night games for New England.

The Patriots don’t see the Bills until December, which is odd. This first meeting on Thursday night football has Pat Patriot red jersey throwbacks written all over it, and hopefully it has some AFC East implications if Buffalo hasn’t ran away from the rest of the pack yet. The Bills are also playing on Thanksgiving in Detroit the week before.

New England’s second appearance of the year on MNF will come against Kyler Murray, Hollywood Brown, DeAndre Hopkins and the Cardinals. Interesting to see if the Pats stay out west given the opponent the week after.

The Pats don’t have to go very far if they don’t want to after the Cardinals game as old friend Josh McDaniels and the rest of “Patriots West” await in primetime. You obviously hope that this game has serious playoff seeding implications to go along with all the storylines.

Another short week the Patriots have to deal with and it’s the AFC Champions coming to town. This – like the Raider game – could have huge playoff seeding implications if we’re lucky, but any time the Pats play at home on Christmas Eve it always feels like a special afternoon. I personally love it.

Again, it’s hard not to love the idea of the Dolphins coming here on a frigid January day. This is the way the NFL schedule should have always been. If the Dolphins are still in it then this could be another fantastic game in a string of them. That, or they could be out of it and head out on the town in Boston for New Years Eve, giving the Pats an easy W to start 2023.

AFC East title on the line in Week 18? Possibly in primetime on Saturday or Sunday? What an incredible week of hype this game could have if that’s the case. Either way, upon seeing this I immediately thought back to the David Patten game where he was knocked out on the sideline late in the year.

Of course it is wayyyyy too early to make any actual predictions regarding the schedule, so we’ll wait until after training camp to do that. There are plenty of intriguing matchups and cool road trips with this schedule at the very least, and both the Christmas Eve and New Years Day games have a chance to be a couple of special days at Gillette.