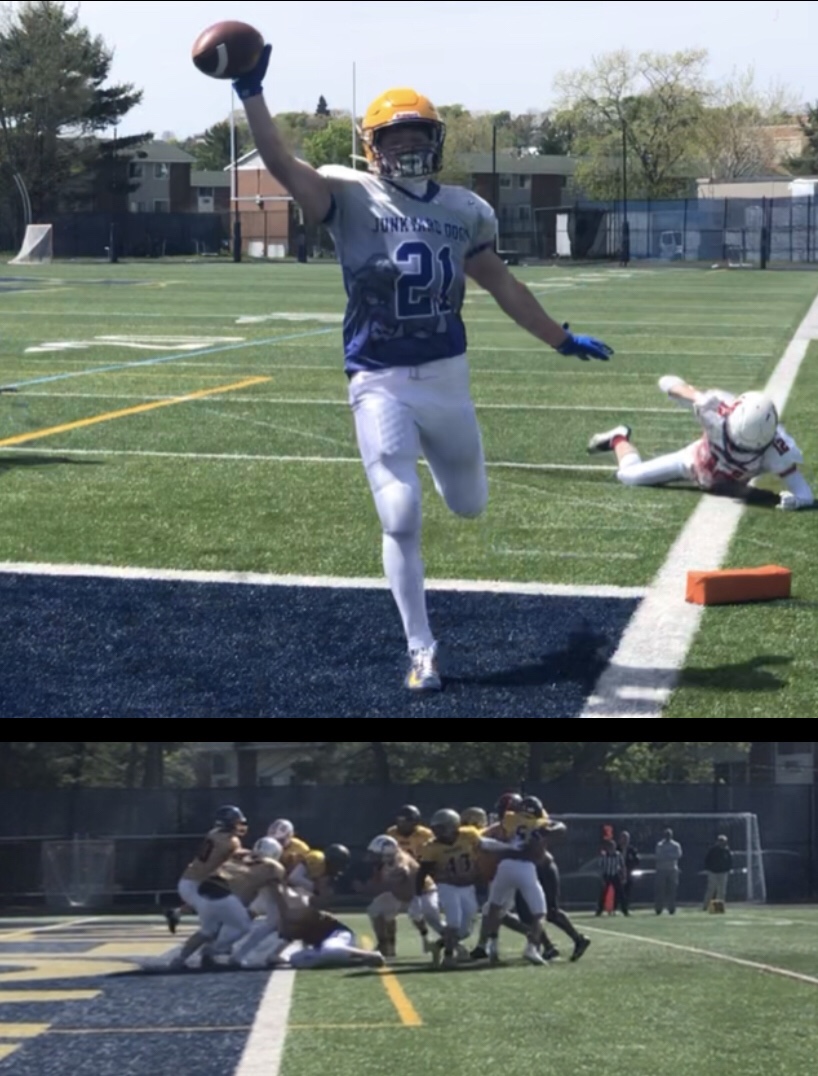 MALDEN – The League was created to give kids an opportunity to improve and be tested in a real football environment.

During Week 2 on Sunday afternoon, circumstances players and coaches would normally face during a playoff game in late November provided an adverse environment.

With winds howling and temperatures dropping, the Boston Junkyard Dogs and Southwest Cobras dealt with the conditions and grinned out 14-0 and 2-0 wins respectively.

Boston’s defense has now pitched shutouts in both of its games and gotten great performances from BB&N’s Bo MacCormack and Barnstable’s Henry Machnik. Meanwhile, it was defense ruling the day for both the Cobras and the Northern Knights, with the Cobras squeaking out the two-point shutout win on a combined safety from Dom Silvitelli (Lawrence Academy) and Will Pera (Branford, CT) with just over two minutes remaining.

“The hardest thing in football is to get 11 guys on the same page offensively,” said JYD head coach Mike Kelleher when asked if it was mostly the conditions or just a lack of continuity that was the biggest issue on Sunday. “We wanted to be better from the first game to the second game, but unfortunately shot ourselves in the foot a lot. We had a lot of 5-yard penalties not getting aligned properly. We’ve got to do a better job coaching, but it was a tough game. You saw a lot of kids flying around, some good hitting, it was a fun game.”

The Dragons (0-2) forced and recovered a fumble on the first play of the game, unknowingly setting the tone for the rest of the afternoon. After forcing a turnover on downs, the Junkyard Dogs (2-0) moved into the red zone late in the first quarter, but an interception from Bishop Hendricken’s Ben Tilton shut the drive down. With less than two minutes remaining in the half, Machnik hit BB&N’s Jack Kelley for a touchdown and Vince Snoonian (BB&N) added the PAT.

“I think our communication on the field has really helped us,” said Snoonian, who had been impressive at a number of different positions. We can have a bad play one play, the next play you’ve got to move on and let each other know what you’ve got to do.”

With throwing the ball downfield pretty much impossible, the JYD rode MacCormack quite a bit until he finally broke off a an impressive touchdown run in the final two minutes to ice the win.

Game two of the afternoon can best be summarized with a quick breakdown of the possessions:

Finally, after forcing another punt, the Cobras (1-0) had a chance to make something happen with the Knights(1-1) backed up its own goal line. With Selvitelli charging in off the edge from the left and Pera pushing his way up the middle, the two of them were able to sack Lawrence Academy’s Luke Reynolds in the end zone for the game-winning safety.

“It was third and long, so we kind of expected the pass,” explained Selvitelli. “They weren’t really creating much out of the run, they were just running Power’s and I feel like we just got into our pass rush stance, really overpowered them like we had been doing the whole game, playing aggressive. Me and Will just got after them.”

“I’ll take it every time,” said Cobras head coach Neil McGrath of the low-scoring affair. “I think we expected (a low scoring game), it’s hard when you don’t have much practice time. It’s hard when you’re not together a lot to get everything going on all cylinders and functioning properly, but the kids played hard. We ran it down their throats and that’s who we’re going to be. We had fun.”

Now, The League will provide another test that kids and coaches won’t find at any camps. Games will be on Thursday night this week (Worcester Academy, running from 8-9:30), which means a very quick turnaround after a physical game.

These guys wanted “real football” and they’re getting it in bunches in a very, very short amount of time.

“It’ll be interesting,” added McGrath. “We won’t change a lot, we’ll just get better at it. My biggest thing is the kids taking care of their bodies and staying healthy. They’re young and resilient and they’ll heal quickly, but you still want to make sure and be smart about what you’re doing. So far, this has been great, it’s been awesome.”