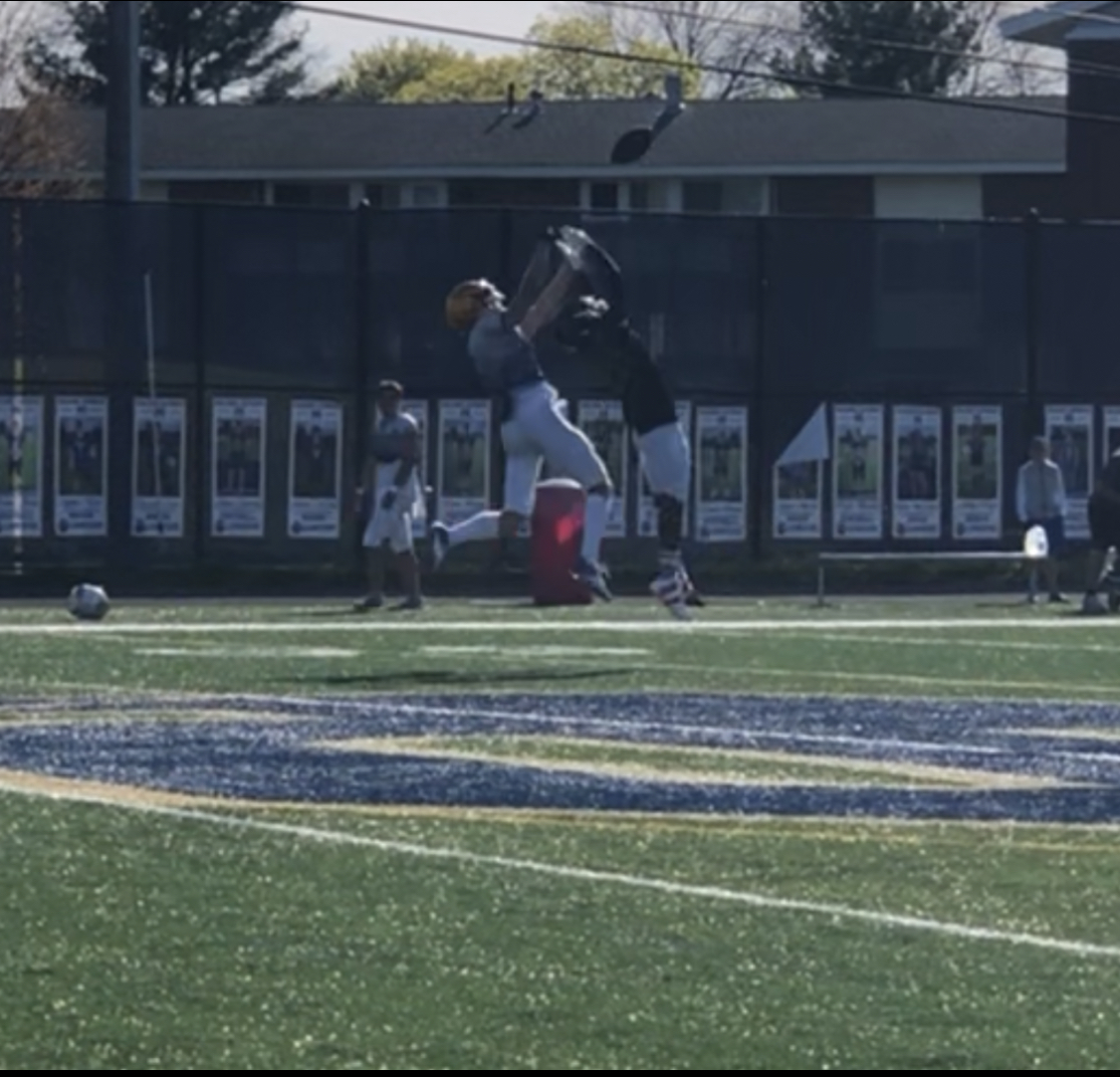 MALDEN – With a large, vocal crowd on hand Sunday afternoon at Malden Catholic High School, you would have thought it was an MIAA regular season football game.

Nope. That was just “The League” hosting its season opening games on what turned out to be a beautiful spring day. Week one ended with the Northern Knights and Boston Junkyard Dogs earning wins in the first games of the month-long season. The JYD beat the MetroWest Maulers 26-0, while the Knights took down the Southeast Dragons 21-0.

“These guys care,” said Dragons’ head coach Tim Freiermuth. “They want to win, they want to get after it. Even if they’re not (at practice or a Zoom call) they’re asking what we put in this week, what are the new plays, asking questions, communicating, and I think they’ve done a great job. We have a lot of guys who find the value in what we’re doing here and they’re doing a tremendous job.”

“All these kids who are choosing to play in this league love football,” added JYD head coach Mike Kelleher. “They truly love football and the development of these players down the road is going to be incredible. I’m fortunate enough to coach down in Florida, so I’m going to get on a plane and go down and coach at Aquinas when we start spring ball. They’ll be out there for 20 practices getting better. These kids are not only going to see improvement on a week-to-week basis, but this fall.”

Defense was the story early on in the first game until Tiger An (Windham, NH) punched in a 1-yard TD in the final minute of the second quarter for the first points of The League’s second season, putting the Knights up 7-0. If you haven’t seen An play (if you’re in Massachusetts you probably haven’t) he is a combined clone of Jerome Bettis and Mike Tolbert. No one wants to tackle. human bowling ball.

A few play’s before An’s score, Lawrence Academy quarterback Luke Reynolds had an impressive scramble after showing his elusiveness in the pocket to help set up the score. With the Dragons driving late, Arlington Catholic’s Isaiah Osgood picked off a pass near the end zone to keep the Knights up 7-0 at the break.

“I think we were flustered a little bit in the first half as a team, but we haven’t played football in a while,” said Reynolds. “This is the first live contact so you get what you get, but football’s football. Once we settled down we played how we’re supposed to play.”

“I have,” An added with a laugh if he’s ever heard the Bettis comparison before. “My running style is hit the hole hard and break out. Accelerate, hit that outside and go score.”

Both defenses came ready to play Sunday and it continued into the second half with an intense, hard-hitting affair. A six-yard TD catch for Billerica’s Jacob Metivier in the fourth quarter made it 14-0. Westford Academy’s Matt Haggan had a late interception to ice the game, and a 1-yard touchdown run for Nathan Galbraith (Concird, NH) was the cherry on top. Harrison Bloom (Timberlane Regional High School) had all three extra points.

Game two was the Junkyard Dogs’ from the start as Barnstable quarterback Henry Machnik hit BB&N’s Brett Elliott for a 60-yard touchdown just four plays in. The Maulers began their second drive at their own seven and Acton-Boxborough lineman Jackson Chandler was injured on the second play, ultimately needing to be taken out by ambulance.

Precautions were taken for a neck injury which made the situation quite scary, but NEFJ was able to confirm on Monday morning that Jackson is “totally fine” and that there were nothing but “good reports” on his health.

A 13-play drive later on in the quarter ended with a 1-yard TD run for BB&N’s Bo MacCormack, giving Boston a 14-0 halftime lead. MacCormack added another touchdown run from 25-yards out early in the second to push the lead to 21-0 after Vince Snoonian’s third PAT. Isaiah Kacyvenski (BB&N) had an interception for the JYD late in the third to maintain the 20-point lead heading to the fourth.

On the final play of the game, Machnik launched a ball deep for Ronan Hanafin (BB&N) who “Moss’d” a defender, caught the ball and then raced downfield for a 65-yard touchdown as time expired.

“It’s great, because we only play against the ISL teams,” MacCormack said of The League. “It’s goof to play against those MIAA teams and let them know what we’re doing up there in the ISL and have them let us know what’s going on in the MIAA, just to see how we stack up. It’s great.”

The League is back at Malden Catholic High School for Week 2 next Sunday with games scheduled for 1 and 3 P.M.