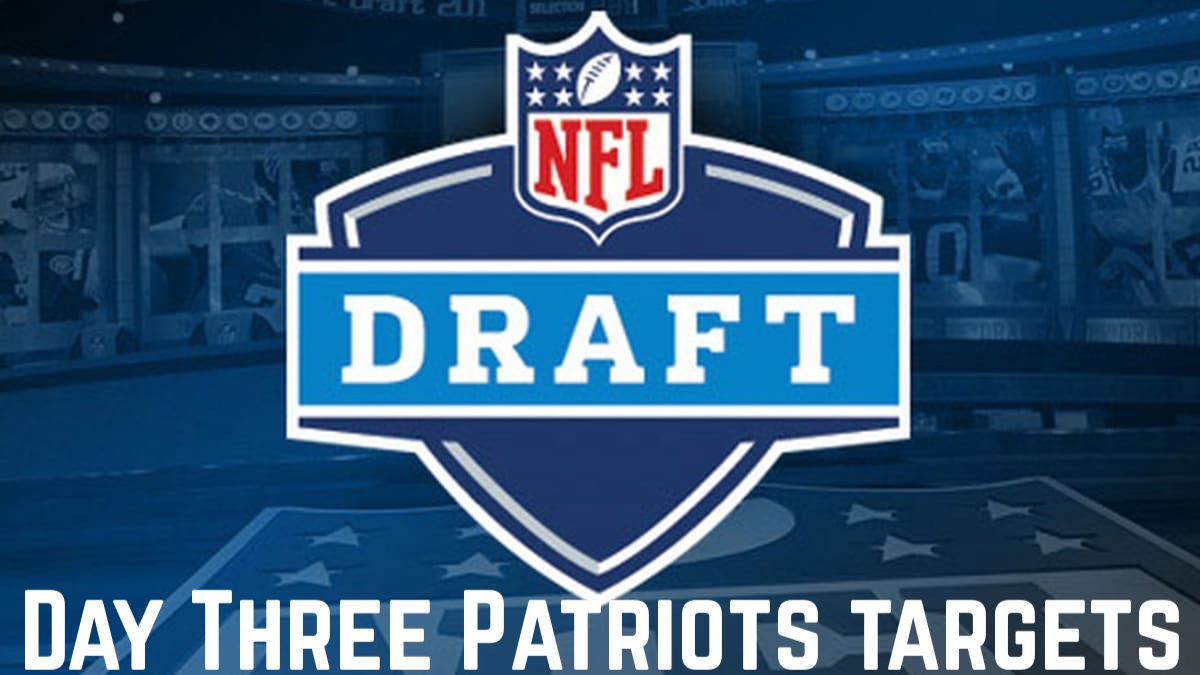 Day 3 of the NFL Draft is here. The Patriots have 6 picks from rounds 4 to 7. They currently don’t have a fifth round pick.

Here are the Patriots current picks today. Chances are, they won’t use all of them.

Verone McKinley III, FS, 5-10 192, Oregon: McKinley is a two level safety who can play over the top in a two shell or screw and cover a slot receiver in man coverage. Ideal fit for a team like the Patriots who play three safeties.

Kyle Phillips, WR, 5-11 189, UCLA: Terrific route runner who has good hands and knows how to create separation on his release. Can play in the slot or as an X or R receiver.

Chase Lucas, CB, 5-11 182, Arizona State: Lucas is your classic Patriots type corner. He has good length and he’s smooth and fluid in coverage. He also plays smart and has a good understanding of coverages.

Aaron Hansford, ILB, 6-2 239, Texas A&M: Hansford has a classic MIKE linebacker build. Moves well laterally and can make plays from the backside. Plays with good strength at the point and takes on blockers. A good 30 front scheme fit.

Josh Jobe, CB, 5-11 182, Alabama: Jobe battled injuries last season but when healthy, he profiles as a squat Cover 2 who can play outside. Uses his hands well and re-route defenders underneath in funnel flat technique. Does a good job in phase but needs to play the ball better.

Zach Tom, C, 6-4 304, Wake Forest: A center by trade, Tom spent the last two seasons playing tackle. That versatility will appeal to the Patriots at some point on day three.

E.J Perry, QB, 6-1 211, Brown: Perry was in for a top 30 visit last week. He is a smart, athletic quarterback who throws well on the run and is accurate. Needs to make better decisions post snap but he has developmental upside.

D’Eriq King, QB, 5-9 196, Miami (Fla): King was electric as a quarterback at both Houston and Miami but will play receiver in the NFL. Dynamic athlete who could also return kicks.

Kyren Williams, RB, 5-9 174, Notre Dame: Williams is sound in all phases of the position. He runs with good balance and explosiveness. He is also fundamentally sound as a pass blocker and can be a factor in the passing game. Lack of size and a third gear hurt his draft status.

Bryce Watts, CB, 5-11 187, UMass: The former Virginia Tech and North Carolina commit ended up at UMass where he played at a high level. Smooth and fluid in man coverage, Watts could also be a factor in the return game.

Isaih Pacheco, RB, 5-10 216, Rutgers: A Brandon Bolden clone who can contribute offensively and be a core special teamer.

Slade Bolden, WR, 5-10 193, Alabama: Mac Jones former roommate is a good route runner who can create separation on breaks and has strong hands. Profiles as a fourth or fifth receiver.

Josh Thompson, CB, 5-11 194, Texas: Thompson has good size and does a good job of pressing and staying in phase. Lacks top end speed but competes in one on one situations.

D’Anthony Bell, S, 6-0 211, West Florida: Bell is your classic Patriots safety. He has ideal size, good ball skills and he shows a willingness to support the run. He also offers alignment flexibility. He’s a 3X3 player.

Darian Butler, LB, 5-10 221, Arizona State: Butler has visited with the Patriots. Undersized but athletic. Butler could play safety and be a stalwart on special teams.