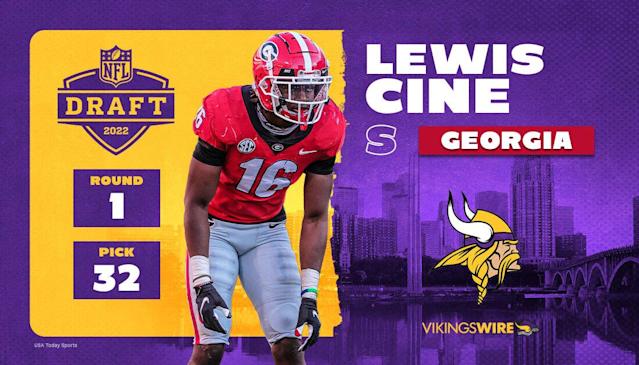 
Just before the clock struck midnight on Friday morning, former Everett star and standout safety Lewis Cine was selected by the Minnesota Vikings with the final pick of the first round in the NFL Draft.

“We’re building for a dream season here, you want to come join us?” Adofo-Mensah said to Lewis.

“Sign me up!,” Lewis replied with loud cheers from family and friends in the background. “We both interned at Morgan Stanley, so I think it was all meant to be one day,” Adofo-Mensah added with a chuckle.

“Lewis, congratulations my man,” said O’Connell during the initial phone call. “I did not intern at Morgan Stanley, but I can tell you I’m going to be excited to be your head coach, man. You’re a big time player and we’re real fired up to get you here. Congrats to you and your family, you’re a first round pick in the NFL Draft.”

Early on Friday morning, presumably before the party really got started, Cine met with the Minnesota media and talked about the emotional experience. “Thank you to the coaching staff there, the owners, administration, everyone for believing in me and choosing me to be a Viking,” he said via Zoom.

Lewis was immediately asked if he felt like he could step in and be a day one starter for the Vikings who have a void at safety that immediately needs to be filled.

“I think the fact that I was selected where I was selected by the Vikings, they have a whole lot of faith in me, so I’ve just got to prove them right,” Cine answered. “I’ve got to come in with the mindset to soak everything in, to learn, to be coachable, to bring good vibes to the organization and to be an asset in the locker room.”

Cine was also asked about where he developed his physicality, which he is probably most-known for. Spoiler: he’s always had that nastiness and mean streak whenever he’s taken the field.

“Being physical has always been in my game,” he said. “That’s one thing that’s been my bread and butter since I started playing the game. That’s what I love about it. You can be as physical as you want, break some other man’s will and get away with it. I embrace that and something I plan on taking to the next level with me.”

Clearly, the Minnesota media didn’t really do much research on where Cine went to high school as he was asked how familiar he is with cold weather and playing in the snow…even though the Vikings are also in a dome…

“I’m from Boston, so I’m used to the cold,” Cine said with a grin. “I was born in the Caribbean. I’ve been in the heat, cold, so I’m used to all of that. That’s going to be no issue for me.”