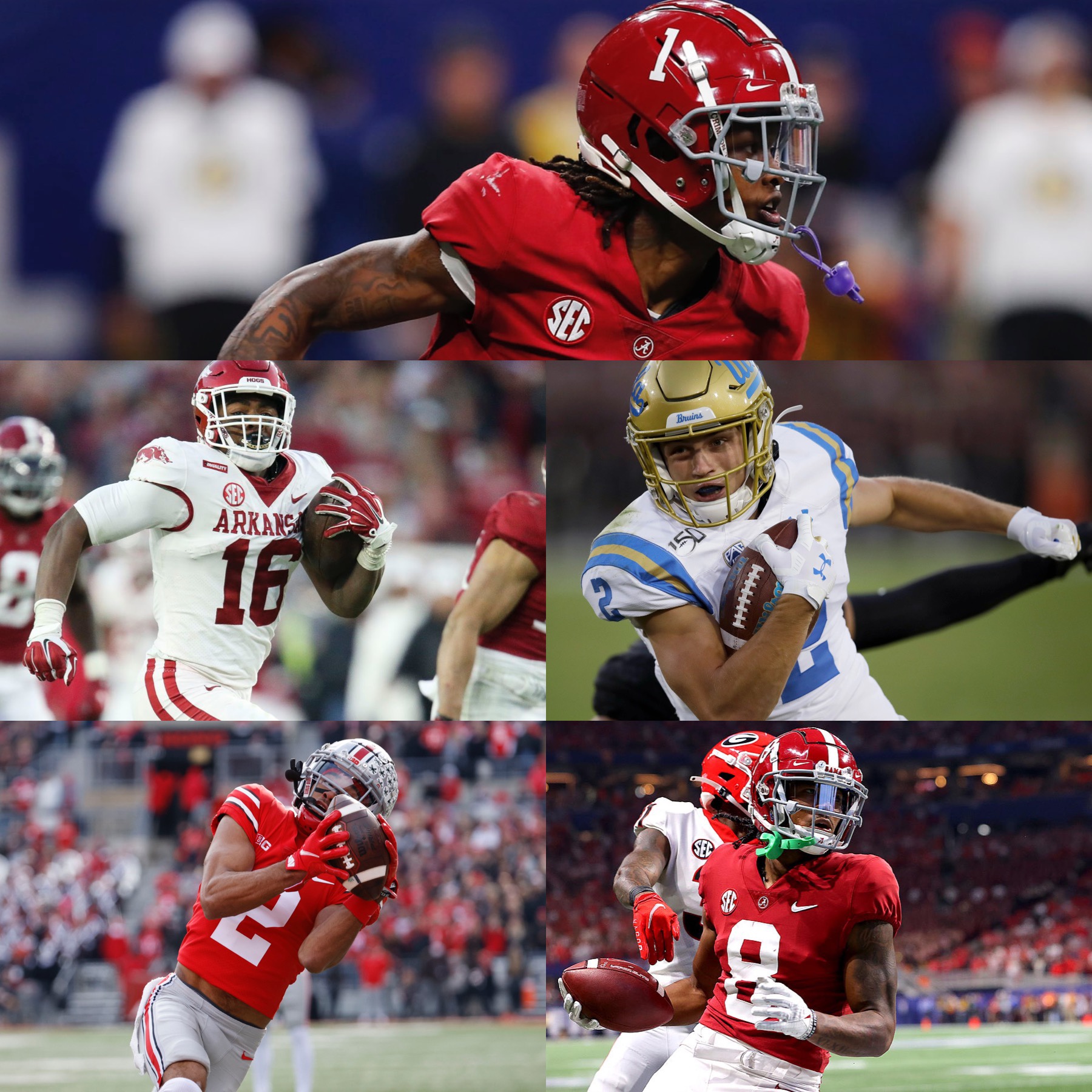 On paper the Patriots don’t really need a wide receiver but with so much uncertainty at the position after next season, it would not be a surprise to see Bull Belichick address the position at some point in this draft. If nothing else, he can bring some additional depth at the position.

Here are 15 wide receivers that I think would be a good fit for the Patriots.

My Scouting Report: Fluid route runner who is a long strider and can gain separation at the top of a route. Has great feet and hips and can get in and out of route breaks.

Big play specialist who can go up and get it. Has a wide catch radius and can finish plays at one on one over defenders. Has smooth hands and can catch the ball all around his frame.

Olave is an average run blocker who needs to get stronger in this area. Needs to play stronger underneath in the 3-step and intermediate game. Gets out positioned at times by corners. Round: 1st

My Scouting Report: Big target with a thick frame. Smooth route runner who gets in and out cuts. Strong with the ball. Has a wide catch radius and can put position defenders for the ball. An effective runner and receiver. Has a good feel for jet sweeps, fly sweeps and perimeter screens.

Has a second gear. Can separate after the catch and finish. Premium red zone target who can win one on one on fade and back shoulder fade routes.

Burks is big but his athleticism won’t jump out at you on film. A good blocker but needs to learn to play with more bend and balance. Round: 1st

My Scouting Report: A long strider who is smooth in and out of cuts. Closes cushion fast on corners. Runs a complete three level route tree effectively. Has a wide catch radius and can go get the ball.

Williams is effective on perimeter screens. Has stop, start ability and can make defenders miss one on one. Plays bigger than his size.

A late season ACL injury is my biggest concern with him. If fully healthy, he could be the number one receiver in this class. Round: 1st

My Scouting Report: Slight but explosive receiver who is at his best over the top on fade and post routes. Gets in and out of cuts with ease and creates separation. Has quick hands and can go up and snatch contested balls.

Effective underneath in the three step and perimeter screen game. Can make defenders miss in space and create separation. Eats up cushion and sets up double moves well.

A bit slight. Makes big plays but needs to prove that he can be more than that. Needs to show more in the three step and five step intermediate pass game. Rounds: 1st-2nd

My Scouting Report: A slot receiver who can play inside or split out at X. Moore has a terrific release. Does a good job of using his hips and feet to gain separation at the line. Smooth route runner who gets in and out of cuts. Has quick hands and can catch the ball anywhere around his frame.

Moore is effective underneath in perimeter screen and in the quick game. Can turn a three yard slant into a 50 yard touchdown catch because he is sudden and explosive in space.

Size is a concern. Tends to struggle at times as a blocker. Won’t win any one on one jump ball situations but he’ll still compete. Reminds of current Jets second year receiver Elijah Moore. Rounds: 2nd-3rd

My Scouting Report:Long, smooth receiver who gets in and out breaks cleanly. Does a good job of setting corners up on his release. Explosive at the top of route breaks. He can create separation. Has good hands and can win jump ball situations. Has a wide catch radius and has shown a willingness to go inside the hashes and make the tough catch.

A red zone target who can create separation on fade and post corner routes. Can go up and snatch it at the high point.

Missed last season due to a torn ACL. Has some maturity issues to overcome. Needs to get bigger. Thin framed. Rounds: 2nd-3rd

My Scouting Report: A polished route runner who gets in and out of cuts with ease. Can play in the slot or play Z or X. Releases cleanly using his entire body in the process. Can create separation at the route break and has a wide catch radius.

Effective in underneath routes and perimeter screens. Can break defenders down and win one on one. Competitive in one on one ball situations.

My Scouting Report: Watson is a long and lean receiver who is a long strider. Creates separation on his release and can stack and separate over the top. Attacks the ball and shows good body control when going over the top to catch a football.

A willing blocker who breaks down, punches and has good footwork. Effective in the receiver run game as well. Ran jet sweeps, fly sweeps and reverses.

Watson needs to do a better job of catching the ball. Had a bunch of drops last season. Doesn’t play physical. Needs to be more aggressive. Rounds: 2nd-3rd

My Scouting Report: Robinson is one of the most versatile receivers in this draft. Runs quick, sudden routes and can create separation after the catch. Breaks defenders down one on one and can make them miss in space. Has a good feel for the running game. Runs jet and fly sweep well and can make big plays in the run game.

Robinson has a good feel for perimeter screens. Runs bubble and now screens well. Can line up in the backfield and take handoffs. Adept at running inside zone, outside zone and mid zone.

Robinson plays small at times. Despite his size and lateral quickness, lacks vertical quickness. Profiles more as a complementary piece than a primary target. Rounds: 4th-5th

Phillips is a smart receiver who understands route adjustments and can make them on the fly. Willing blocker who competes to finish his blocks. Runs good perimeter screens and can make defenders miss in space.

Phillips competes in one on one ball situations but does not have a wide catch radius. Struggles to separate from man coverage at times. Needs to do a better job of stacking cornerbacks on vertical routes. Rounds: 4th-5th

My Scouting Report: Shakir is a good route runner who can create separation on his release, mid route or at the top of a route. Silky smooth route runner who knows how to get open by using his entire frame. Runs a full route tree and isn’t afraid to run routes inside the hashes. Has plus hands and can contort his body to make catches away from his frame.

Shakir can play in the slot or line up at X. Most effective on three step and intermediate routes.

Shakir is not a blazer. Doesn’t have finishing speed and while he catches the ball well, he’s short armed and doesn’t consistently win 50/50 balls. Rounds: 4th-5th