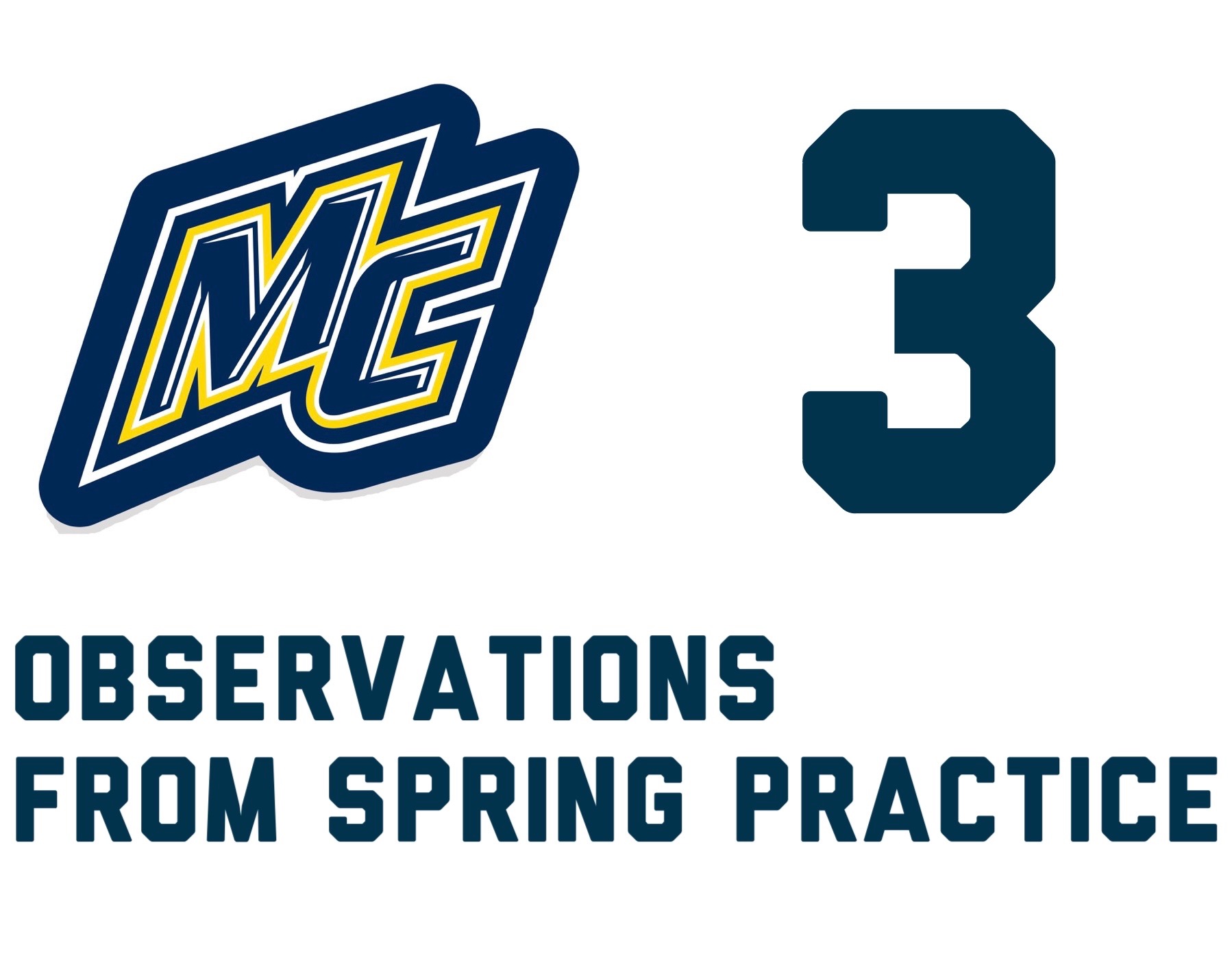 NORTH ANDOVER – Spring ball season is officially winding down over these next two weeks and Merrimack is putting final touches on a very productive couple of months.

After finishing 5-6 a year ago (2-5 NEC, good for 6th place) there is reason for optimism in North Andover. Head coach Dan Curran has continued to establish a gritty culture at Merrimack while also producing some NFL-caliber talent. There should be some Warriors on an NFL roster by the end of the weekend whether they’re drafted or signed after the fact.

On Saturday morning, Merrimack was outside at Duane Stadium just as the sun rose for an early morning practice. We stopped by one of the final sessions before Friday night’s spring game (7 P.M.) to see just how much progress has been made this spring. Here are the three things that stand out for the Warriors at this moment…

This could be said for a lot of programs right now, but Merrimack in particular has seen an influx of talent from the region come in and contribute. The roster currently has 25 guys from New England on it. The more the merrier as this region continues to pump out talent that’s making a difference at every level. Merrimack has a few guys that will be relied on heavily this year if the Warriors are going to get to the next level and compete with Sacred Heart, Duquesne and Bryant.

“New England’s kind of going on the map, whether it’s more four and five-star guys out of high school, more guys going to the league, stuff like that,” said Wilmington, MA native and senior H-back Tyler Roberts. “I feel like the traction is really picking up for New England football.”

“I totally agree,” added graduate defensive back and Bishop Hendricken (RI) alum Anthony Witherstone. “Even in our conference, you see a lot of guys going to the next level and then even at the high school level, guys are getting big D1 offers at the Power 5 schools. In New England there’s definitely an uptick in talent in football.”

Nice mix of youth and veterans on the roster

The Merrimack offense is a bit behind the defense right now, but Coach Curran and his staff have done a nice job of blending the two and it should serve the Warriors well moving into summer workouts and eventually camp.

“”Every opportunity we get out here is great,” said Roberts. “Being able to hit people keeps me sane. Spring has been huge for the offense because I think we’re a little bit younger than the defense is, especially on the offensive line. It’s been great to get some live periods in and opportunities for those guys to work.”

“Defensively, we return more guys with experience, so we expected that group to be a little further ahead,” said Curran. “I think they have been, but throughout the spring it’s been good, there’s been some good give and take (with the offense. There’s days where the offense probably played better and then on the flip side, the defense did as well. What we want as a program is not only seeing that day-to-day, but period-to-period.”

Most spring games are hit or miss in terms of seeing an action-packed afternoon or a glorified walkthrough. It all depends on health first and foremost, but Curran and the staff are planning on doing a little bit of everything next Friday night. It should be a mix between a very spirited practice and a legitimate game. One thing is certain after spending the morning with the Warriors, there won’t be a team in the NEC that works harder than they do.

“We’ll go ones versus ones, twos versus twos, three versus threes,” he said. “Everybody will get a bunch of opportunities, it’s really important for these guys’ development. We’ll do some other competition things before we get into the controlled scrimmage. We are sitting some guys, some of our keys guys that are either coming off surgery in the offseason, or a couple guys we just want to keep healthy and not put them in a position to be hurt going into the offseason.

“You’ll see us play 90% of the roster and everybody will get an opportunity to play Friday night.”