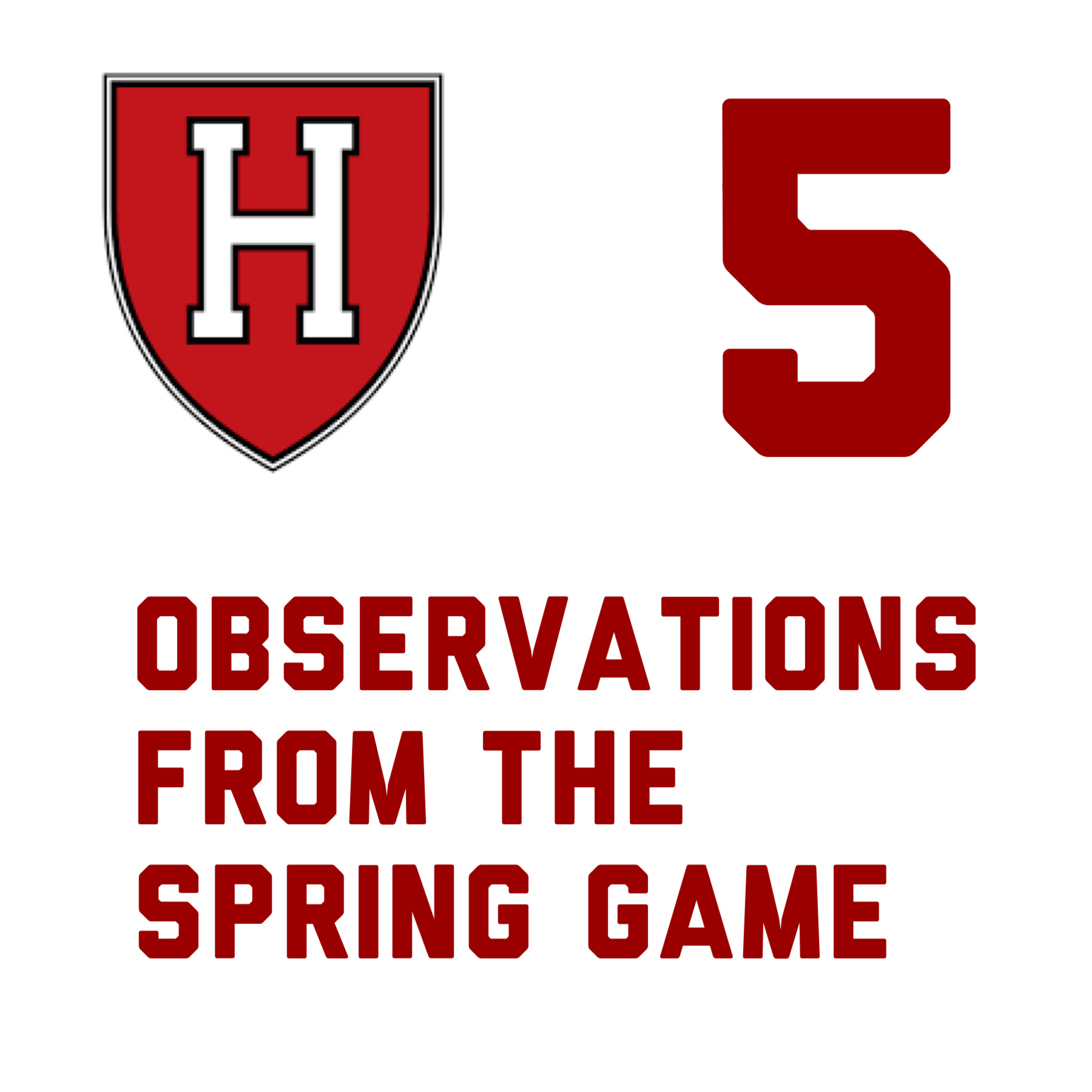 CAMBRIDGE – On a beautiful spring afternoon Saturday, the Harvard football team took the field inside the stadium one last time until camp in August.

With finals rapidly approaching, members of the Crimson had one chance to hit some moving targets and apply what they’ve learned throughout the last month or so before hunkering down in a library or dorms to study. The mens lacrosse team earned a massive win over rival Princeton and a good chunk of fans made their way over from Jordan Field to see what the football team had to offer, adding to the atmopshere. Here’s what stood out from the two-hour game on Saturday…


Physicality was off the charts

If you thought you may see some two-hand touch or light tackling, you were sadly mistaken. Right from the opening drive, the Crimson were laying the wood and going full speed for the entire game. Head coach Tim Murphy’s no nonsense attitude and approach to the game seeped through and was on full display.

“They really embrace the spring game, they love to play,” Murphy said. “You do so little of that (hitting) in the spring, it’s a great opportunity to have game conditions, have officials, have game uniforms on, the kids got geeked up and went after it pretty good.”

Coach Murphy has been a defense-first guy for a long time, but even longtime fans of the program had to be a bit stunned seeing just how good the unit looked on Saturday. Sophomore Cameron Stone had a pick-six on a tipped ball for one of just two scores in the game. The defensive line was relentless and had at least a handful of “sacks” despite QB’s wearing non-contact jerseys. The linebackers flew around to the football and the defensive backs did the same. The Ivy League is going to have a tough time moving the ball against the Crimson this season is Saturday was any indication of what to expect.

“Defense was outstanding today,” added Murphy. “Obviously, having such a sense of familiarity, there’s not a lot they don’t know about our offense. whether it be personnel schemes or some of our language, but I thought the defense set the pace today….it all starts with defense in our program and we have a chance again to be an outstanding defense.”

“I think we knew what was coming,” Stone said of the physicality on defense. “We haven’t had a real spring ball in two yaears. To be able to end it off with a spring game meant a lot to our guys, especially the ones who have been around a little longer. I think we all knew the energy was going to be high, so how it turned out was great.”

It wasn’t all rainbows and sunshine for Harvard on Saturday. There were several snap exchange issues and quarterbacks seemingly had a guy in their face on every drop back. Charlie Dean, Conor Easthope and Curt Casteel all had their moments and some nice throws when given the opportunity, but those opportunities were few and far between. steel threw the only offensive touchdown of the game on a 20-ish yard ball to freshman running back Malik Fredrick.

On the flip side, Harvard’s ability to create holes is evident and the running backs all run hard and show an ability to hit the hole quickly. Aidan Bourget is obviously going to be the “lead dog” this year, but Fredrick, Bourget and Sone Ntoh all showed flashes whether it be carrying the rock or catching it out of the backfield. Running and defense seems to be the early template for success as it stands right now. The backs should absolutely be the focal point early on in the season.


Special teams up and down throughout the afternoon

During warmups, kickers Jonah Lipel and Cali Canaval showed great leg strength, nailing a few kicks into the wind. Unfortunately, field goals weren’t happening during game action as there were two blocked attempts in what was truly a defensive showcase. The protection needs to be better (or if you’re a defensive guy, it needs to continue being aggressive and getting hands up) but no matter who does the kicking, we’re pretty confident either guy can get the job done. There were no real punt or kick off returns, so we’ll have to wait and see how that looks until camp.