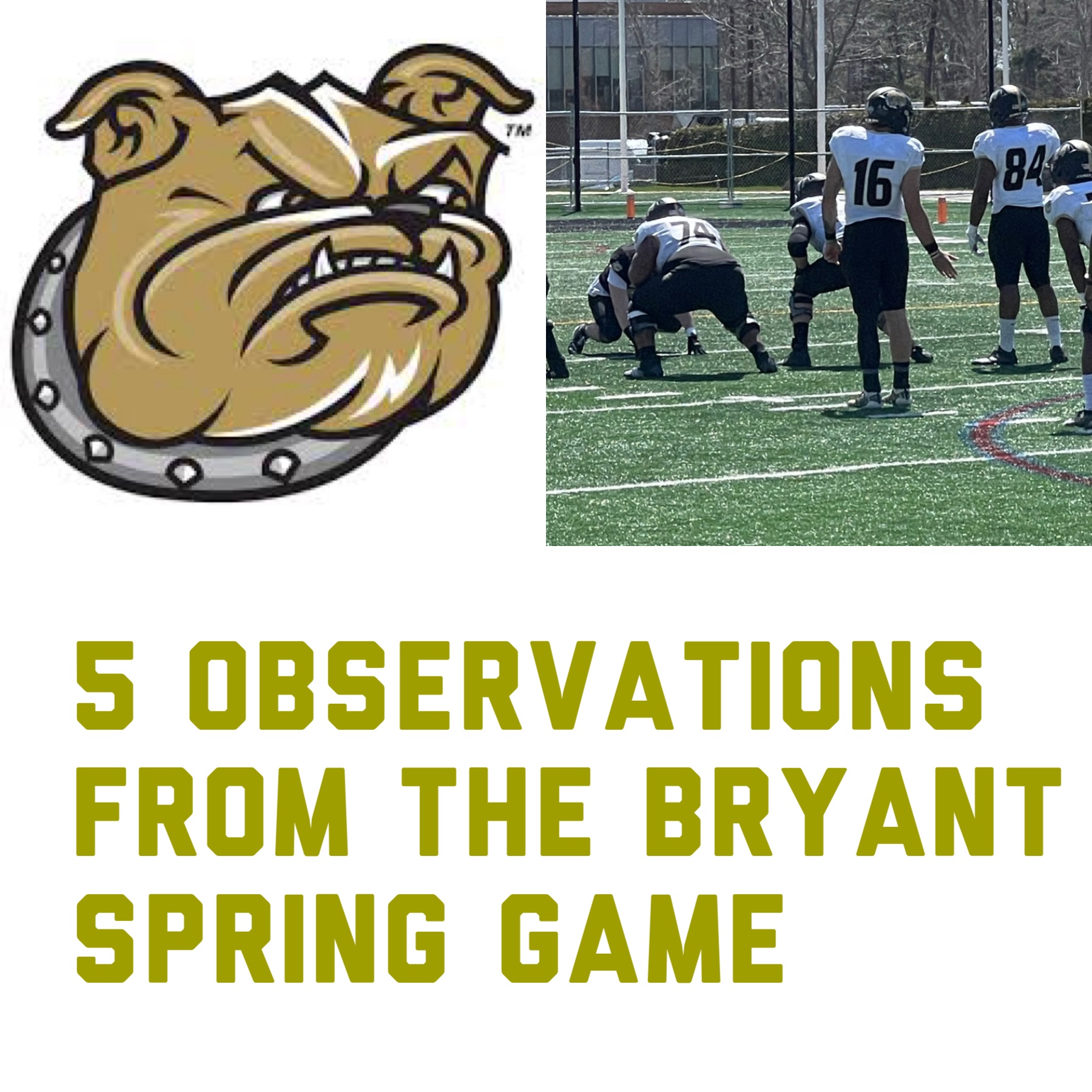 It was a glorious afternoon on the campus of Bryant University for the annual Black and Gold Game. It was so glorious in fact that I got a sun burn on my face.

In any event, it was a rocking atmosphere as the Bryant Baseball team was also playing at the same time. For the first time in three years, it felt like a normal spring.

Here are five observations from the Bryant Spring Game.

1. Quarterback play: Junior Keith Ridley and sophomore Ryan Clark got all the reps. Reigning NEC rookie of the year Zevi Eckhaus sat out the spring so he did not play. Ridley stole the show. The Lynn Classical alum threw four touchdown passes and show poise and a good command of the offense.

Clark had his moments as well. I thought he ran the ball well and looked every bit of the dynamic dual threat quarterback he can be.

Head Coach Chris Merritt talked about the performance of the quarterbacks.

“We didn’t have two of quarterbacks this spring. It was a great opportunity for two of our quarterbacks. Keith Ridley and Ryan Clark took all the reps and it was an opportunity to improve their craft. Keith had the best scrimmage since he’s been here.”

The Bulldogs have some legitimate depth at quarterback and it showed yesterday.

2. Backs ran hard: I thought the running backs had a good day. Senior Ishod Finger, sophomore Kyle Cichanowsky and senior Fabrice Mukendi all ran hard. It is no easy task replacing someone like Daniel Adeboboye but the Bulldogs certainly have enough depth to do it.

The offensive line also played well both in the run game and in pass protection. I am sure that run game coordinator and offensive line coach Steven Ciocci will find plenty of things on film to correct but from a distance, I thought they had a good day.

3. Defense looked fast: One thing you know about an Anthony Barese coached defense is that they play fast. The Bulldogs played fast defensively.

The highlight of the day for the defense was a Colin Elliott pick six for a touchdown. Elliott picked off Ridley during a coming out period early in the game. The defensive line also did a good job of moving around and creating some confusion.

The defense was without all conference linebacker Joe Andreessen so that makes a big difference. From a coaching standpoint, I am sure the defensive staff will find plenty to correct but there is no doubt that this unit will give offenses in the Big South fits.

4. Plenty of skill: The Bulldogs have a good skill group and it showed yesterday. Senior David Zorilla (Everett, Ma) and tight end sophomore Marc Taglieri both scored touchdowns. This is a diverse group that can create match ups. It should be fun seeing how Coach Merritt and the offensive staff get these guys touches when the season starts.

5. Merritt’s Message: Coach Merritt’s message to the team was simple afterwards, You can be a great team. The key to being a great team according to Merritt is focusing and cleaning up the mental mistakes. If the Bulldogs do that, Merritt believes his team can reach their full potential.

“We’ve got clean up the mistakes. Those are the things that separate the good from the elite. The great teams don’t do that. We don’t shoot ourselves in the foot, we don’t penalize ourselves. We force our opponents to beat us. We just have to focus on playing football instead of making the mental errors. We can be a great football team.”