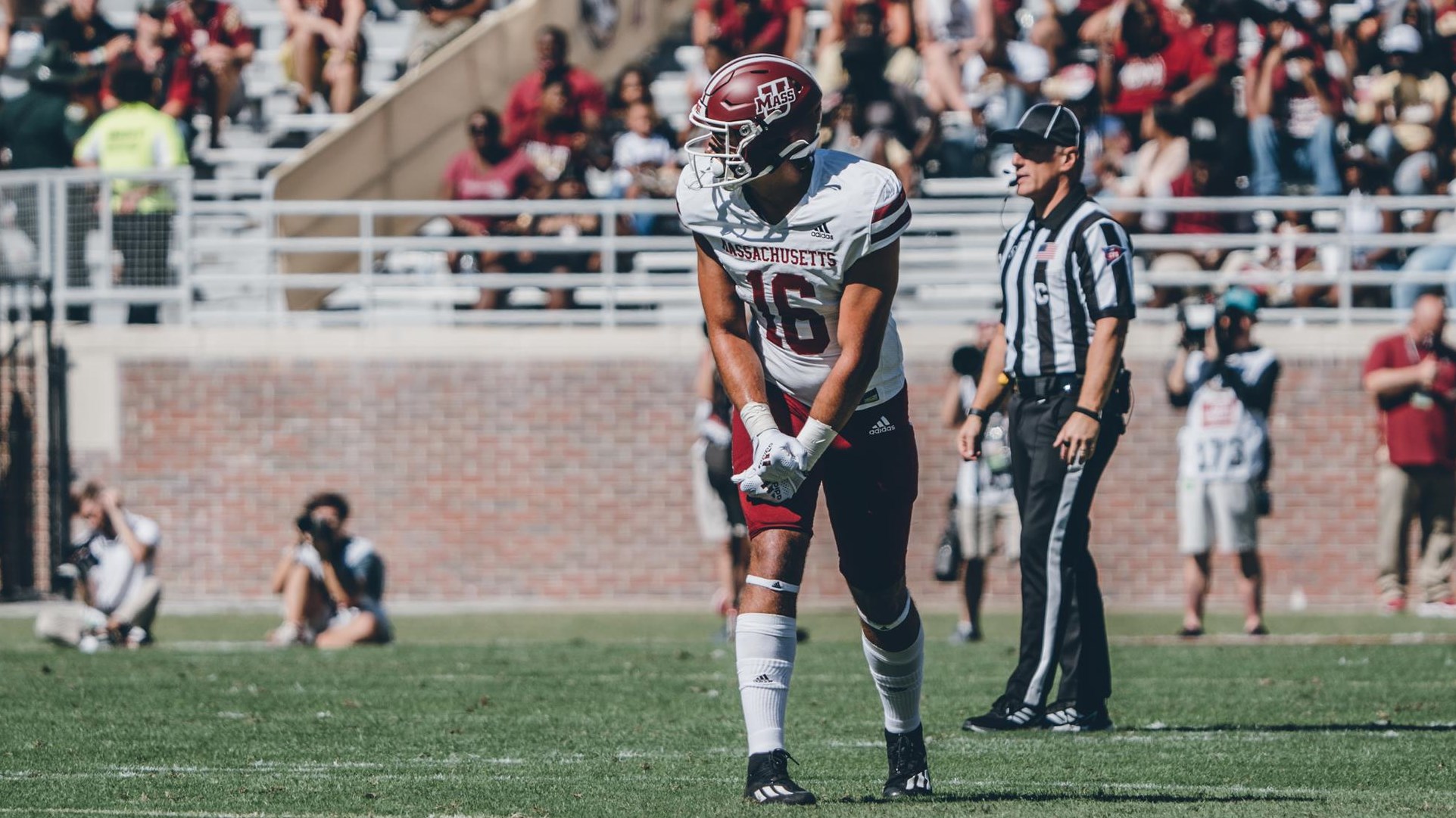 
We’re just one week away from the UMass spring game and there’s a good chance it’s the most highly anticipated spring game among 15 Division 1 New England programs this offseason.

The Minutemen are set to wrap up this extremely important spring session with the April 30 game that should draw a big crowd eager to see what all the fuss has been about. On Thursday following one of the 15 practices that Don Brown has to work with, tight ends coach and recruiting coordinator Jeff Moore and his Swiss Army knife on offense Josiah Johnson spoke to the media and gave their point of view on how things are going among a few other things. Here’s what stood out as we check in with the Minutemen…


Moore on coming to UMass:

“Probably the biggest thing is being able to work with Coach Brown. I played for him my freshman year here. I think just his values align with what I’m looking for, not just as a coach, but as a person from a family standpoint. To be able to work under him and also just to be back at UMass, I went here, my wife went here, so it’s an important place to us overall.”

“We’re really happy with where we’re at right now. We still have some work to do, but we’re fortunate that we have a great group of coaches who all have strong relationships throughout the east coast and throughout the country. With the transfer portal, we’ve been really fortunate where our coaches have relationships with kids at other schools, whether they worked at those schools or they knew them throughout the recruiting process. A lot of that paid off huge dividends, but a huge thing for us is New England and Massachusetts especially will be important no matter what, so we’re pretty happy about getting a group of high school guys from Massachusetts as well.”

Moore on the tight ends:

“We’ve got a really good group. Josiah Johnson was obviously second team All-Independent last year, works incredibly hard, great kid. Jake Orlando’s really blossomed in the spring, really good kid, Jaret Palotta – JP – is extremely intelligent. He’s sort of the old vet who’s been here a while. He’s done a great job and then also seeing the two younger guys Eni (Falayi) and Jackson (Manning) both getting better every single day and they’re going to have the ability to make an impact as well.”

“He’s done a great job. The one thing I’ll never doubt is how hard he works, so it doesn’t matter where he is or what position he’s at, his work ethic’s great, his intensity’s great and he just really loves football.”


Johnson on adjusting to the new coaching staff:

“These coaches have been absolutely amazing. Obviously, with all the position stuff, now that I’m back at tight end it’s taking a little bit to get the whole blocking stuff, like, obviously at QB I knew all the routes and stuff…it’s just a lot going on. But, these coaches have been incredible. I love the pace of practice that we’ve had. Obviously, Thunderstruck is such a fun aspect as well. How physical we’ve already been, I think it’s been really good.”

“It was nice being back (at QB), I did have a lot of fun, throwing around and running the ball. The whole position thing, it was just conversations between be and (offensive coordinator) Coach Casula. I kind of felt that…I didn’t know if I was helping the team as much in that spot, it was kind of a back and forth and then I talked to him. We just talked about the best route for me to go, especially in the future to try and play next level. If I’m going to play as a tight end I need to practice as a tight end, but it was a lot of fun.”

Johnson on how he may be used:

“From my understanding, they’re going to try and use me in a few ways and I just hope to keep proving that I can be used in those types of ways. I just want to win some games, I know they do too. Whatever I can do to help them, if it’s just blocking all game or getting some snaps at quarterback, running, whatever it is, I just want to win.”

“Especially towards the end of last season, obviously there was a lot of ups and downs with coach being fired while the season was still going and Coach Miller did a great job trying to keep us up, but a lot of us just felt unsure about things. There was a little bit of an off kind of vibe you could say, but right when Coach Brown stepped in the door the first day in the meeting, he told us what he wants, he told us how much he loves this team and university. I think that’s kind of what’s helped the fire, the motivation and the energy. We know how much he cares about this place and it’s not just for him to put a notch in his belt, saying ‘yeah, I coached them to this record,’ he just wants to win here again like he already has. You just really feel the authenticity of his energy and what he wants. It’s definitely a different feeling, for sure.”

“To my understanding, we’ll be going live a little bit more. That’s the only difference. We’ve obviously been hitting a lot, but we haven’t really gone to the ground, or at least try not to go to the ground as of now. I think that’s just going to be a little difference, I’m not sure how much and to what capacity we’ll be doing that, but it still will be kind of a practice. Maybe a little more contact I want to say.”