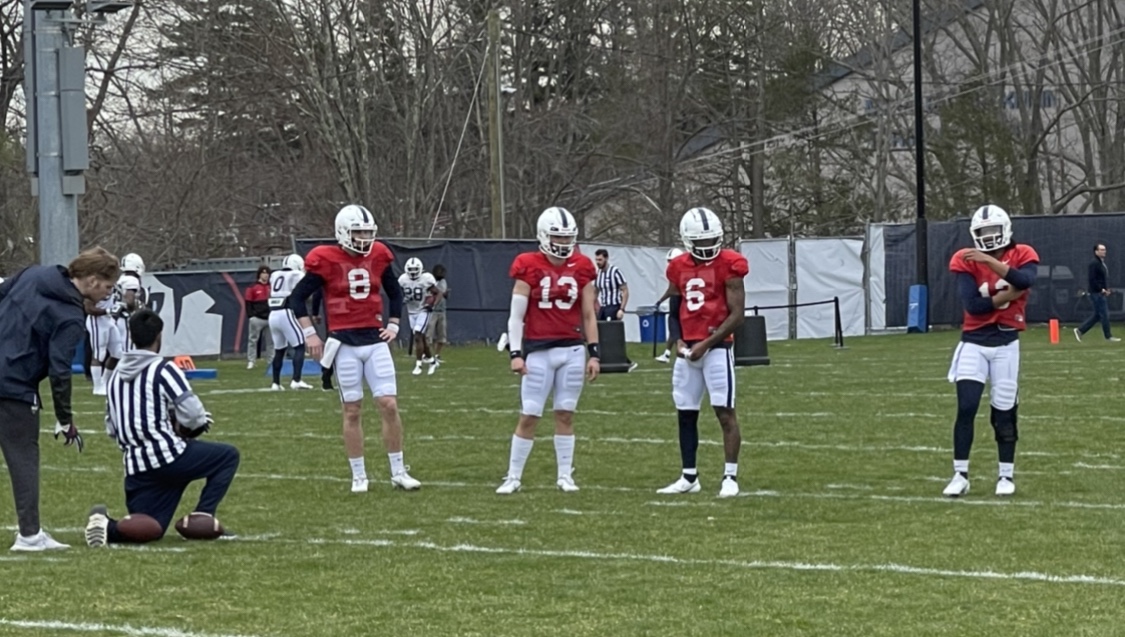 STORRS, Conn. — For now, no decision has been made on the starting quarterback position at UConn.

But new coach Jim Mora has to like his options.

For the time being, that choice looks like it will come down to Ta’Quon Roberson and Steven Krajewski. Those two took the majority of the reps with the first team Saturday.

It was a bit of an up and down performance for both, but each quarterback displayed traits that could turn the Huskies into a winner sooner rather than later.

So far, the majority of the hype has been around Roberson, who played his high school ball in New Jersey and transferred to UConn from Penn State.

A lot of what makes Roberson potentially special is that he is gifted as a runner. He made some nice throws Saturday, but his ability to extend plays and make people miss in the open field are what have many people excited about him.

By design, offensive coordinator Nick Charlton kept Roberson in the pocket Saturday. Early on in the workout, Roberson was hitting his receivers in stride and, in one portion of practice, hit two touchdown passes in consecutive periods. The second scoring strike, a 30-yarder to Bo Estes, got his teammates fired up.

Roberson leveled off toward the end of practice, and threw an interception late.

Krajewski, who played at Georgia big-school power Colquitt County, at times made some nice throws, as well. Although he is not quite the runner Roberson is, Krajewski moves well at times, and is no statue in the pocket.

The advantage Krajewski has in this competition is experience. A junior, Krajewski played in nine games in 2021, where he threw for 1,217 yards and nine touchdowns.

Whoever wins the job will have a promising group of skill players to spread the ball around to. Wide receivers like Cameron Ross, Keelan Marion, and Nigel Fitzgerald — among others — along with backs like Will Knight and Brian Brewton, give this offense the ability to score a lot of points, even against the tougher teams on the schedule.

Regardless of who wins the quarterback job, that potential is there. It’s now up to either Roberson or Krajewski to convince the coaches that he is the one to do it.