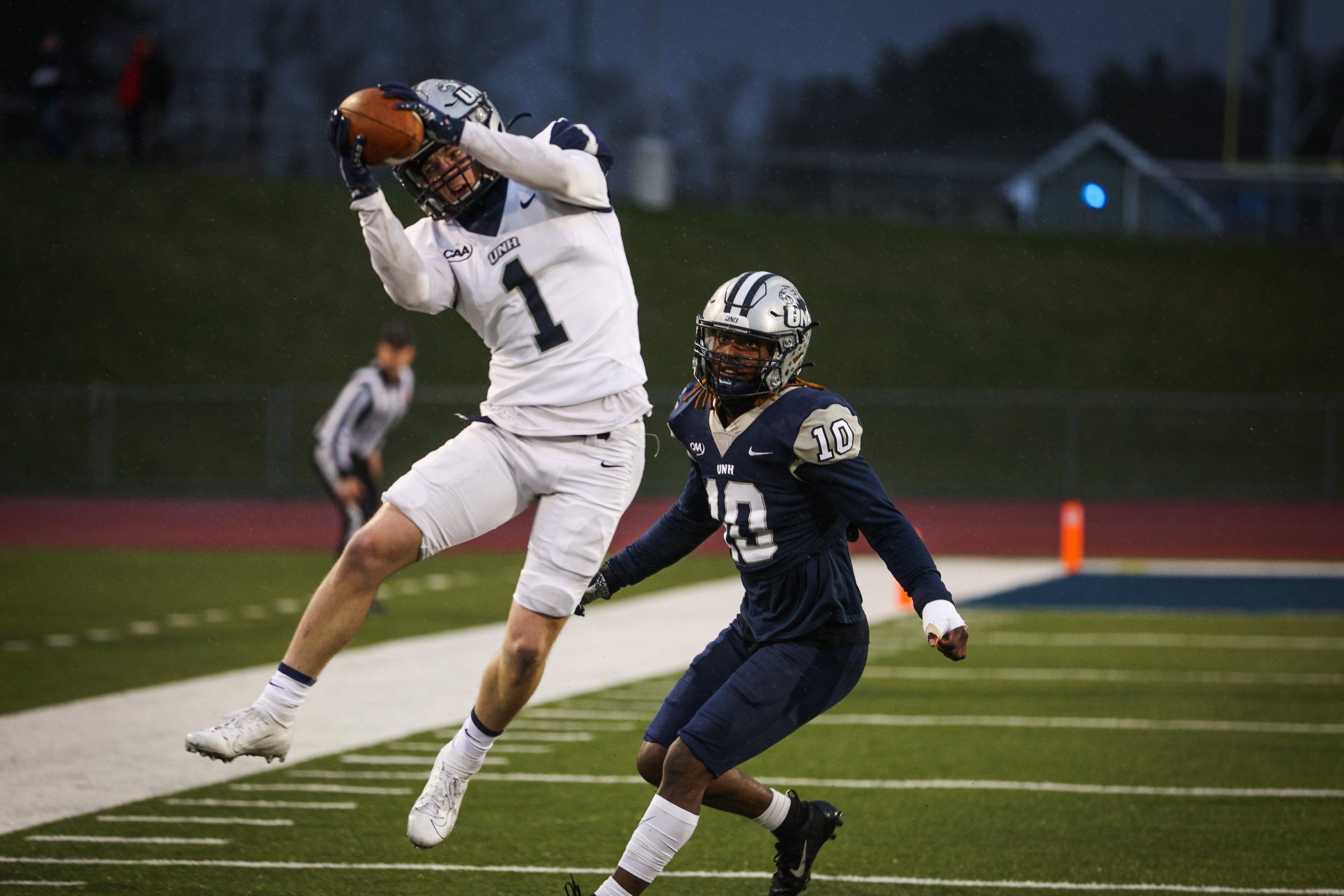 The energy was good in Head Coach Ricky Santos first Blue and White Spring Game. You can see the tempo and pace has been wretched up a notch.

Here are five observations from the Blue, White Spring Game.

1. Offensive line was physical: The Wildcats offensive line will be one of the most physical units in the CAA this upcoming season. They didn’t disappoint on Thursday night, paving the way foe running back Dylan Laube who carried the ball nine times for 92 yards.

After the game, Coach Ricky Santos talked about the performance of the offensive line and Laube.

“I thought it was good back and forth. Ran the ball pretty well, especially with the ones. Dylan Laube looked great. I thought we handled the defensive line.”

2. McAndrew and Olmstead split reps: The Wildcats split reps between redshirt freshmen Brady McAndrew and Zane Olmstead. Both flashed some potential. McAndrew completed 8-of-14 passes for 63 yards, while Olmstead notched 10-of-14 passing on 126 yards. With quarterbacks Max Brosmer and Bret Edwards recovering from injuries, it was a good opportunity to see what the young guys can do.

3. Laube is a load: It’s not secret the Wildcats want to pound the football this season. Well, we got a glimpse of that Thursday night with Dylan Laube. The junior from Westhampton, New York looked like a workhorse. He averaged 10.2 yards per carry finishing with 92 yards on 9 carries.

With Laube and sophomores Issac Seide and Tyler Pereira in the mix, the Wildcats will look a lot like Chip Kelly’s offenses in the early 2000’s that pounded people.

Defensively, the Wildcats return a lot of talent, most notably defensive end Niko Kvietkus and Pop Bush. Both were named captains for the upcoming season along with wide receiver Brian Espanet and offensive lineman Patrick Flynn.

Young guys like Josiah Silver, Brendan Tighe and Bryce Shaw are coming along as we saw this spring and all three will be difference makers in what will be a talented defense that is among the best in the CAA.

5. Santos pleased with the spring overall: Coach Santos was pleased with his team’s performance this spring. The most important thing is, the team came out of it healthy which matters the most to any coach coming out of spring ball.

“I think it was good. Good back and forth all spring. I am happy we got out of that unscathed. The biggest goal was to stay and now we’re ready to attack the summer.”

With spring ball, over the assistant coaches can now hit the road for spring recruiting and Coach Santos can focus on the summer workout schedule and fall camp.